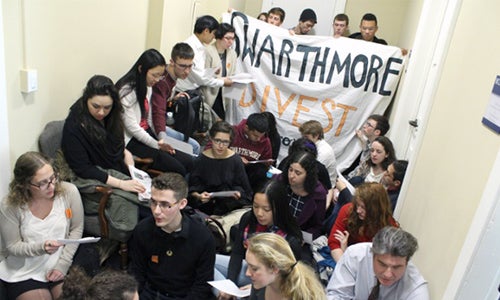 Early this morning, Swarthmore Mountain Justice launched a sit-in for fossil fuel divestment at Swarthmore College. Students at this Quaker college in Pennsylvania helped launch the campus divestment movement, which is now active at hundreds of universities across North America, Europe and Australia. The 37 students and six alumni are asking the Swarthmore Board Investment Committee chair Chris Niemczewski and board chair Gil Kemp to “return to the negotiating table and agree to end the college’s investments in a rogue industry that violates Swarthmore’s Quaker values and recklessly imperils a just and sustainable future for our generation,” according to a statement from the group. 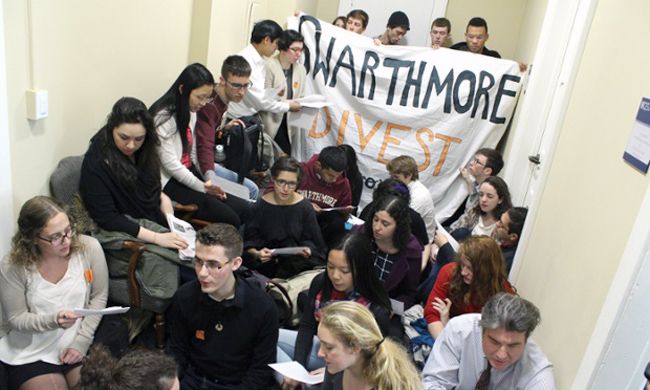 “It is unconscionable for Swarthmore, as an institution of higher education with a commitment to social responsibility, to invest in an industry that is actively destabilizing the future that our education is meant to prepare us for,” said Sophia Zaia, a freshman and sit-in organizer.

The campaign has strong support from the campus community: 1,100 faculty and alumni and 970 students (61 percent of the student body) signed a petition demanding the college divests from fossil fuels. It even has a very high profile endorsement: Christiana Figueres, the UN climate chief, who graduated from Swarthmore in 1979.

The group has chosen to sit-in because talks with the university, which started four years ago, have stalled, according to The Guardian.  The group has a proposal, on which they consulted with the vice president of finance at Swarthmore, that shows how the college can fully divest by 2020, the same year that global emissions must peak in order to avoid catastrophic climate change. “Despite this, the board rejected this historic opportunity to show international leadership on climate,” said Chris Malifronti, a freshman and sit-in organizer.

It’s hard to believe the university wont budge because even the Board of Manager’s recently-hired investments expert, Gregory Kats made a public call for fossil fuel divestment. The university “dismissed divestment as a symbolic gesture and warned divestment would slice $10 to $15 million off the income generated from Swarthmore’s $1.6 billion endowment, much of which goes for scholarships,” said The Guardian. The students reject that argument. “The investment committee denies the existence of the carbon bubble and false claims that no active managers can pursue a fossil-free investment strategy effectively. We know this is wrong,” Guido Girgenti, a political science student, told The Guardian. “The carbon bubble poses a serious financial threat to our endowment.”

The sit-in is happening at a pivotal time in the divestment movement. Many campuses have been pushing for divestment for years and many of those campaigns have succeeded. Norway made headlines last month when its sovereign wealth fund, the largest in the world, made plans to divest. The wildly successful Global Divestment Day took place a little over a month ago with fossil fuel divestment groups taking direct action all over the world. Jibreel Khazan of the Greensboro Four lunch counter sit-in has called climate change young people’s “lunch counter moment for the 21st century.” Young people must be taking Khazan’s message to heart: Oxford alumni occupied a building on campus on Monday to peacefully protest the university’s decision to put off addressing fossil fuel divestment until May. One alumna went so far as to say, “If the university does not divest from fossil fuel extraction I have decided to hand back my degree, in protest.”

Oxford Alum Says, I Will ‘Hand Back my Degree’ If University Does Not Divest from Fossil Fuels