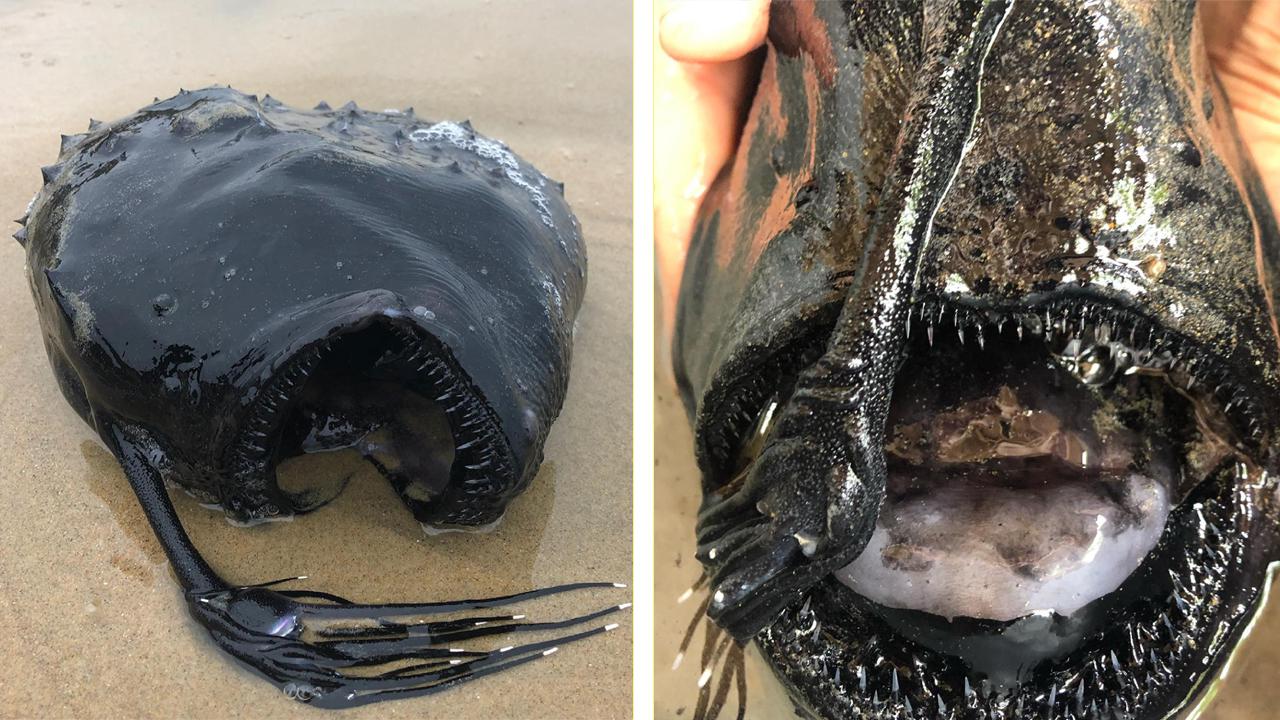 Last week, an amazing and unusual fish washed up on the beach in Southern California.

Black, 18-inches long and football-shaped, it sported a long stalk coming out of its head with bioluminescent tips. This is used to lure prey towards its large mouth with transparent teeth “like pointed shards of glass,” a Facebook post by Crystal Cove State Park described. Its large mouth can then suck up and swallow prey the size of its own body, the park noted.

The fish was found by beach visitor Ben Estes in a Marine Protected Area at the popular park and is a species of deep-sea anglerfish. There are more than 200 species of anglerfish worldwide, the post shared, and experts believed this to be a very well-preserved, intact Pacific Footballfish (Himantolophus sagamius).

“To see an actual angler fish intact is very rare and it is unknown how or why the fish ended up on the shore,” Crystal Cove posted.

Though not rare in the deep sea, where they usually live 2,000-3,300 feet below the surface in complete darkness, anglerfish do not usually wash up on the shore. According to the California Academy of Sciences, the only other specimen of the Pacific Footballfish from California that scientists have was caught in 1985 by fishermen in Monterey Bay, who hauled it up in their nets. It now is housed at the San Francisco museum.

The museum describes the environment that the Pacific Footballfish lives in as so dark that “sunlight doesn’t penetrate.” Food is scarce, so the footballfish has evolved to feed on “whatever fits in its mouth — including other fish, squid, and crustaceans,” Cal Academy noted. The lure dangles in front of its mouth until the prey comes within striking distance. By then, it’s too late for the food: it gets sucked into the footballfish’s large mouth, and its sharp teeth, which are pointed inward, “ensure that what goes in doesn’t come out,” the museum said.

Both the 1985 specimen and the most recent find from Laguna Beach were female footballfish, experts noted, because only females have the long stalk coming out of their heads. Bioluminescent bacteria flow into this appendage through small pores and live within the lure, multiplying due to the protection and nutrition that a host footballfish provides, Cal Academy explained. These bacteria are what actually emit the concentrated light from within the anglerfish lures.

Aside from lacking the bright lure, male footballfish are also much smaller than females. While the latter can reach lengths of 24 inches, males only grow to be about an inch long. Their sole purpose is to find a female and help her reproduce, Crystal Cove noted.

“Males latch onto the female with their teeth and become ‘sexual parasites,’ eventually coalescing with the female until nothing is left of their form but their testes for reproduction. Wild!” the state park posted.

“Using well-developed olfactory organs, they find and fuse themselves to females, eventually losing their eyes, internal organs, and everything else but the testes. The male becomes a permanent appendage that draws nutrition from its female host and serves as an easily accessible source of sperm,” Cal Academy explained further.

Of the most recent find, Crystal Cove concluded, “Seeing this strange and fascinating fish is a testament to the diversity of marine life lurking below the water’s surface in California’s MPAs and as scientists continue to learn more about these deep-sea creatures it’s important to reflect on how much is still to be learned from our wonderful ocean.”