Story of the Year: It's Global Warming, Stupid 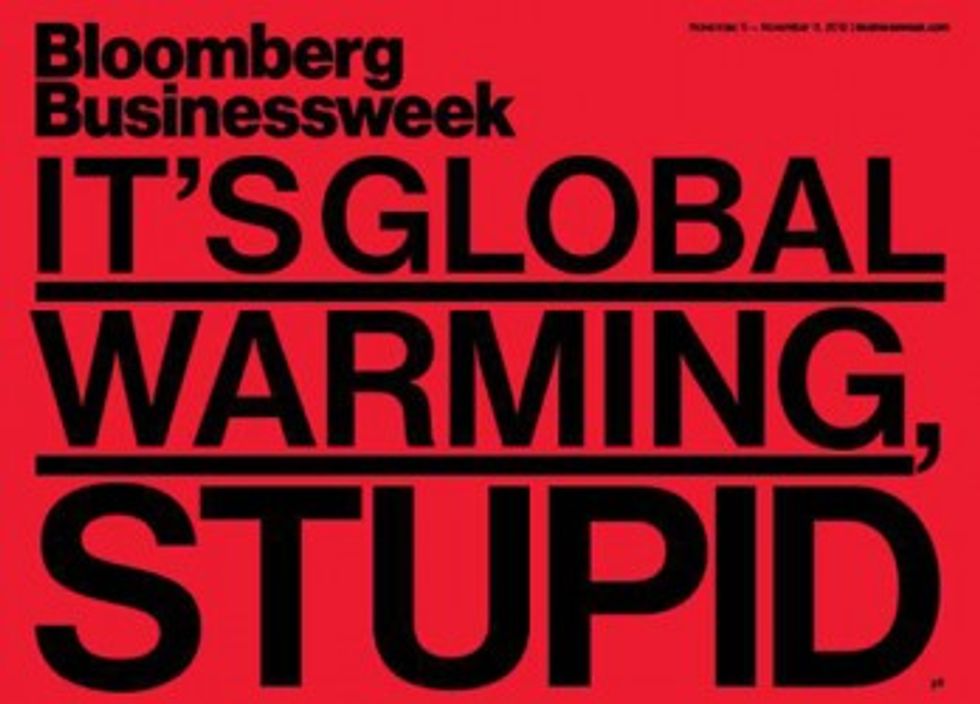 My favorite headline of 2012 was "It's Global Warming, Stupid," which appeared on the cover of Bloomberg Businessweek on Nov. 1, just days after Hurricane Sandy hit the Northeast. On the same day, New York Mayor Michael Bloomberg endorsed President Barack Obama for re-election for president.

Bloomberg, having seen firsthand the devastation of the severe weather on his city and region, said:

The floods and fires that swept through our city left a path of destruction that will require years of recovery and rebuilding work. And in the short term, our subway system remains partially shut down, and many city residents and businesses still have no power. In just 14 months, two hurricanes have forced us to evacuate neighborhoods—something our city government had never done before. If this is a trend, it is simply not sustainable.

Our climate is changing. And while the increase in extreme weather we have experienced in New York City and around the world may or may not be the result of it, the risk that it might be—given this week’s devastation—should compel all elected leaders to take immediate action.

Hurricane Sandy certainly wasn't the only indicator this year of the consequences of a warming planet. I would think that the following reports would have been enough to encourage policymakers to prioritize climate change and pass policies to help reverse global warming, and people to become conscious of their impacts on the Earth and make changes in their daily lives to help create a sustainable world:

Turn Down the Heat: Why a 4°C Warmer World Must be Avoided - This report is a snapshot of the latest climate science prepared for the World Bank by the Potsdam Institute for Climate Impact Research (PIK) and Climate Analytics. It states that the world is on a path to a 4 degree Celsius (4°C) warmer world by end of this century and current greenhouse gas emissions pledges will not reduce this by much.

World Meteorological Organization Report - This report states that the amount of greenhouse gases in the atmosphere reached a new record high in 2011. Between 1990 and 2011 there was a 30 percent increase in radiative forcing—the warming effect on our climate—because of carbon dioxide and other heat-trapping long-lived gases.

Emissions Gap Report 2012 - This report from the UN Environment Programme identifies a huge gap between current pledges to cut polluting greenhouse gas emissions for 2020 and the benchmark of 44 gigatonnes that offers a credible pathway to staying below 2°C.

Global Coal Risk Assessment - World Resources Institute analyzes information about proposed new coal-fired plants and other market trends in order to assess potential future risks to the global climate. The report finds that there are 1,199 new coal power plants in the works, totaling more than 1.4 million megawatts of capacity worldwide. That’s four times the capacity of all the coal-fired power plants in the U.S. Seventy-six percent of the coal plants are proposed for India and China, with the U.S. seventh in the world for coal power plants in development. We have thirty six on the table.

National Snow and Ice Data Center Announcement - This announcement stated that the Arctic sea ice cover was at its lowest level since the satellite record began in 1979. Also this year, Australian scientists found concrete evidence of “very unusual warming” over the last hundred years in Antarctica. And in July, 97 percent of Greenland’s ice sheet melted, an event that received little coverage in the American news media.

If you're a more visual person, you can watch the Chasing Ice trailer to see the impacts of global warming on the glaciers in the Arctic.

I'm hoping that next year, as I'm reviewing the headlines of 2013, I'm able to report on the policies Congress and other countries passed that will help stabilize the climate and expedite renewable energy.