Speaking Squid: How Squid Glow to Communicate in Dark Oceans 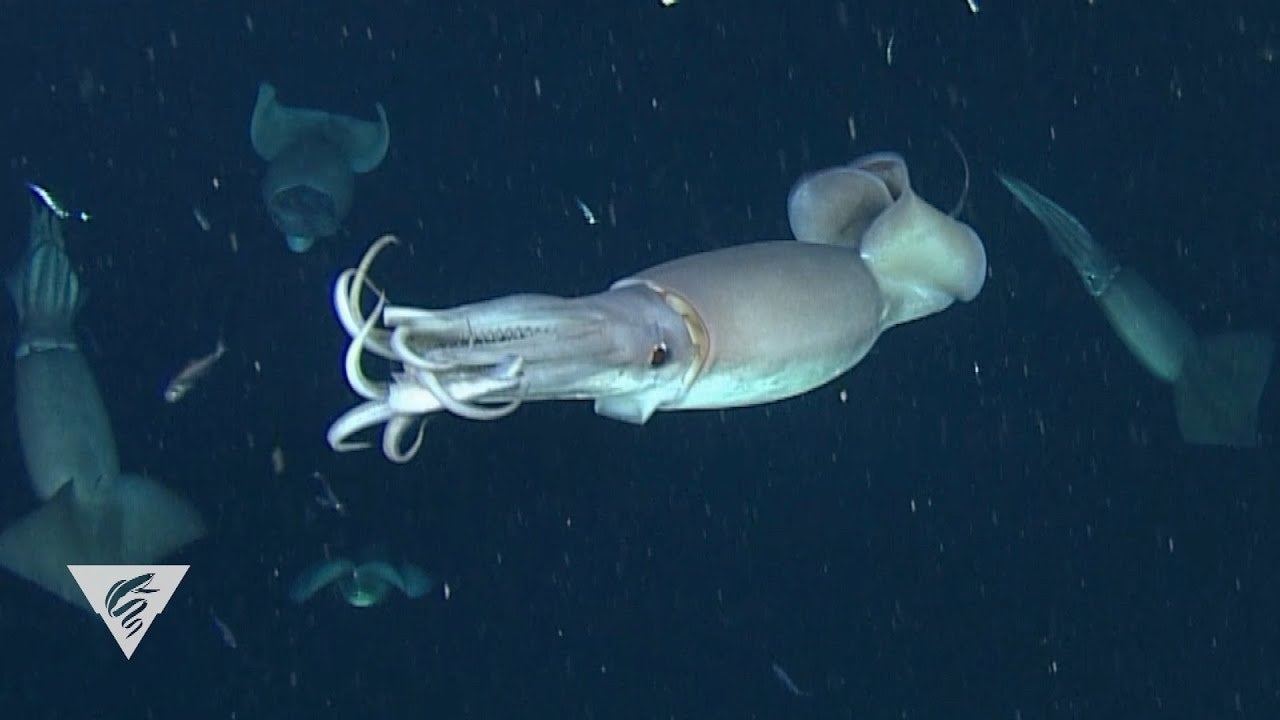 The deep, open ocean may seem like an inhospitable environment, but many species like human-sized Humboldt squids are well-adapted to the harsh conditions. 1,500 feet below the ocean’s surface, these voracious predators could be having complex conversations by glowing and changing patterns on their skin that researchers are just beginning to decipher.

In a study published Monday in the Proceedings of the National Academy of Sciences of United States of America, scientists from Stanford University and the Monterey Bay Aquarium Research Institute (MBARI) captured and analyzed footage of Humboldt squids off the Northern California coast using unmanned, robotic submarines called remotely operated vehicles (ROVs) to better understand this squid’s visual communication.

Humboldt squids hunt in groups, and their collective foraging has been described as a “feeding frenzy.” The ROV footage and new research, however, suggest that the squids actually communicate with each other as they hunt and socialize. They do so by changing patterns of light and dark pigmentation on their skin, the study shows. The changes can be seen even in pitch-black deep ocean because the squids make their entire bodies glow in the dark, reports MBARI.

Humboldt squids have numerous, small bioluminescent organs called photophores embedded subcutaneously throughout their muscle tissue that make them glow, the study’s abstract explains. They use this “backlighting” to “boost the contrast” for skin patterning changes, says a Stanford University news report.

Chromatophores, or pigment cells embedded in the skin, create those pattern changes, reports Scimex. MBARI reports how those are then “backlit like words on an e-reader screen.”

“Maybe they need this ability to glow and display these pigmentation patterns to facilitate group behaviors in order to survive out there,” suggests study collaborator Ben Burford in the Stanford report. “Many squid live in fairly shallow water and don’t have these light-producing organs, so it’s possible this is a key evolutionary innovation for being able to inhabit the open ocean.”

Burford and senior author Bruce Robison compared where the light organs are in Humboldt squid to where the most detailed skin patterns appear. They found an overlap of where the most densely-packed photophores were and where the most intricate patterns occur, the Stanford report explains. The finding lends weight to their hypothesis about the squids’ evolution and use of background glow and changing skin patterns to communicate, the study postures.

Burford analyzed ROV video of 30 Humboldt squids, identifying individuals and observing their interactions. Keeping track of behaviors and skin patterns while squids were swimming alone, in small and large groups and while feeding, Burford realized that Humboldt squids exhibit specific color patterns when interacting with one another in groups, reports MBARI.

The scientists suggest these color changes are a way for the squids to communicate with one another. MBARI explains that a half-light/half-dark pattern that Humboldt squid often display while feeding could be a warning: “Look out — I’m going to grab that lanternfish!”

The squids are able to move through the darkness with exceptional precision, never colliding or competing for prey, the Stanford report notes. “This suggests that their pigmentation changes may be an effective means of communication, analogous to humans using turn signals in traffic,” explains MBARI. Scimex reports that the changes could be a “signaling of intent during competitive foraging.”

The scientists also found that the squids used patterns in specific sequences, “similar to how humans arrange words in a sentence,” describes MBARI. A small sample size prohibited the researchers from understanding the meaning of these sequences, but they believe that certain patterns modify the meaning of other patterns, creating a form of “syntax” or something akin to an alphabet, MBARI continues.

Though the exact meaning of the signals remains unknown and though it is too early to conclude whether the pattern changes constitute a “human-like” language, the findings suggest that the squid communications could be a complex form of animal communication never-before described in deep-sea animals.

Burford concludes, telling MBARI, “What I like about this paper is that we’re investigating really basic questions about life in the deep sea. Even though the deep sea is the Earth’s largest habitat, it’s also the least known. So we’re still making a lot of exciting discoveries in natural history and animal behavior.”