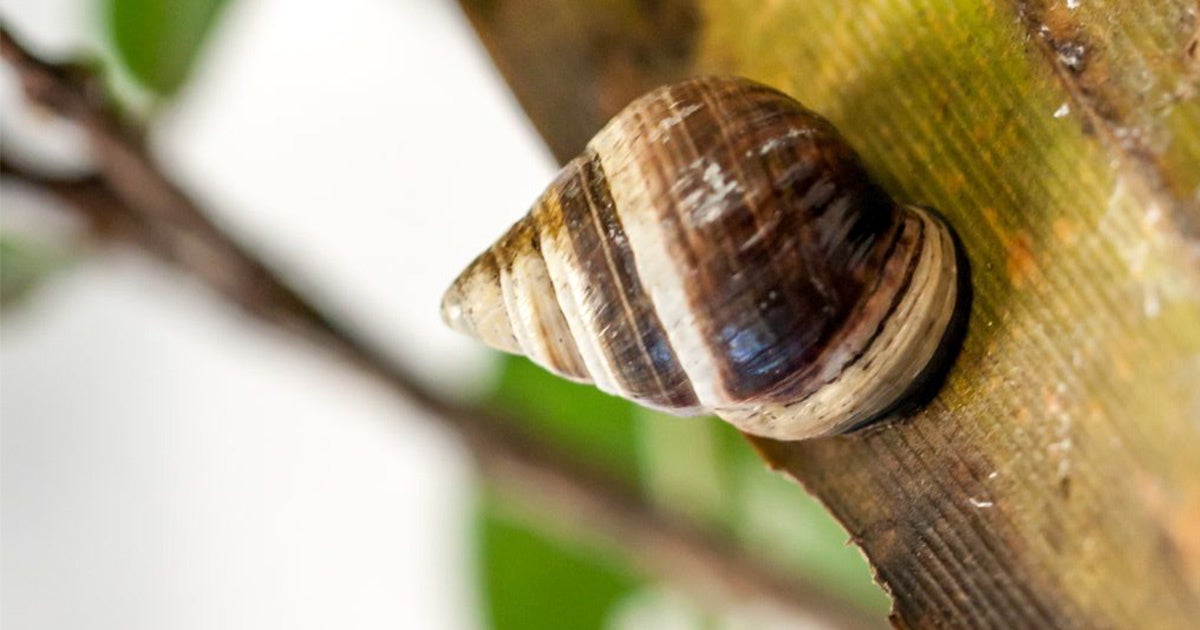 On January 2, a snail named George shriveled up and died in his tank at the University of Hawaii. He was 14 years old, which for a land snail is pretty long in the tooth (or in George’s case, radula). But in all of his years, George never sired any offspring. There were simply no mating partners to be found. In fact, George was the last known member of his species, Achatinella apexfulva. And the moment he slimed off this mortal coil, 2019 experienced its first documented extinction.

While George’s death came as a bit of a surprise (it’s tough to tell when a snail is ill), the extinction of his species has been a long time coming.

“Researchers and conservationists have been looking for this species [in the wild] for over 20 years and haven’t had any luck with finding them,” says wildlife biologist David Sischo, the coordinator of Hawaii’s Snail Extinction Prevention Program.

Scientists actually thought A. apexfulva had already gone extinct back in the 1990s, until 10 of them were found in 1997 and brought under the university’s care. The idea was to set up a captive population whose progeny researchers could one day release into the wild. Unfortunately, none of the baby snails hatched in the lab lasted very long—except George, who was named after the late “Lonesome George,” the Pinta Island tortoise who was also the last of his kind.

While A. apexfulva has the distinction of being the first to die out this year, it is one of several hundred land snails to disappear from the Hawaiian Islands over recent decades. The archipelago was once home to about 750 land snail species—as many as you’d find in all of continental North America, says Sischo. Unfortunately, only around 10 percent remain, all of which are federally protected.

Such losses may not seem all that crucial at a time when species that are, shall we say, slightly more charismatic than your average mollusk—tigers, rhinos and North Atlantic right whales—are struggling to keep their dwindling populations viable. But the people of Hawaii feel differently. 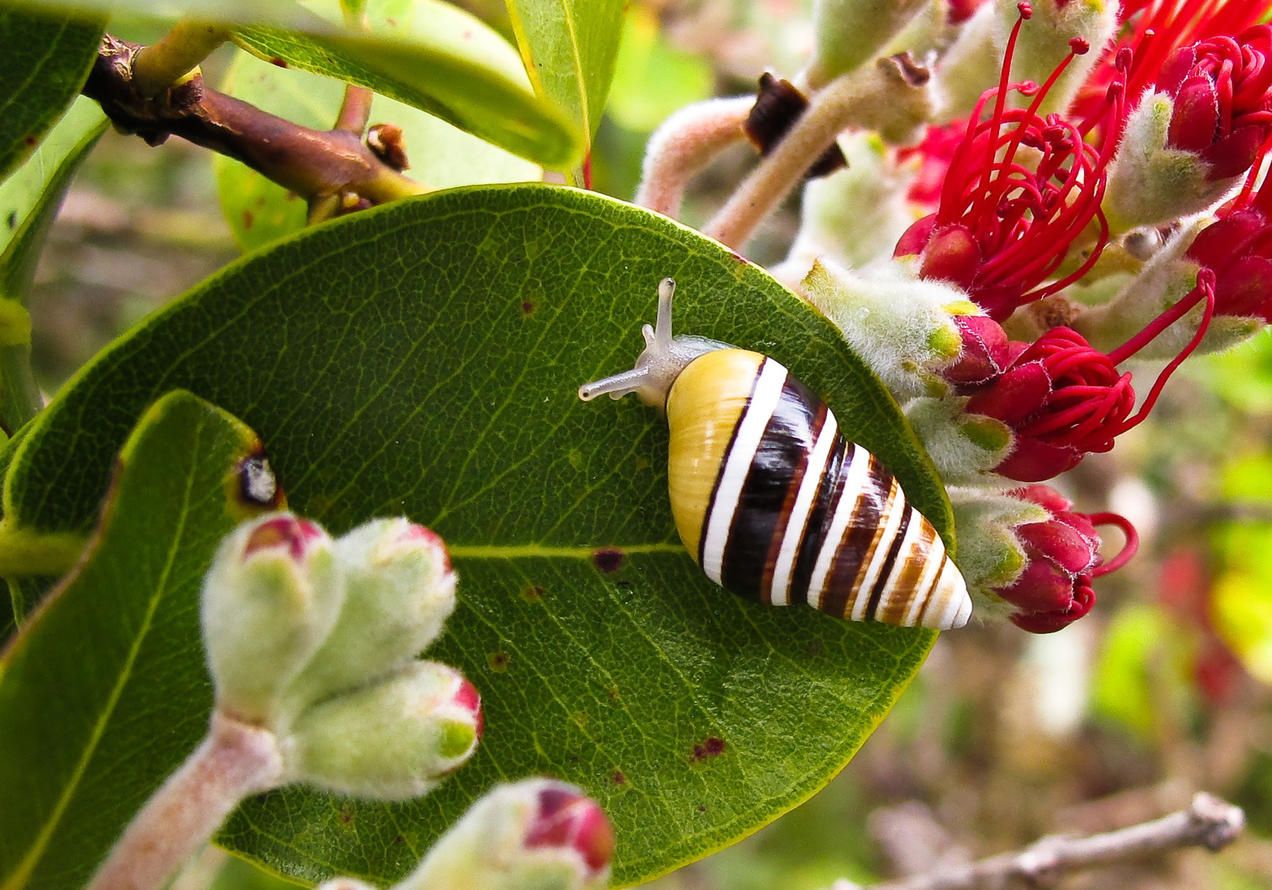 In the Hawaiian culture, snails were thought to have voices and sing in the night, and the names of many native snails reflect this. For instance, Kani kua mauna translates to “music on the mountain ridges,” and Kani kanahele means “voice of the forest.” There’s no scientific evidence to suggest that Hawaii’s land snails can actually sing, and some experts believe that people were hearing crickets and misattributing the sounds to snails, which were much larger and easier to spot. Either way, the association stuck.

“Hawaiians didn’t have a written language, and they passed on their genealogy through chant and through hula,” said Sischo, referring to the traditional style of dance. “Snails personified that ability to pass on your genealogy, if you were a good chanter or singer. Even today, if someone called you a snail, it would be a compliment,” he says. “It was a good omen to see or hear a snail.”

But as it turns out, seeing a giant African land snail was a very bad omen for the islands’ native ecosystems. Hawaiians began importing these oversize snails in 1936 because they looked cool in backyard gardens. The decorative giants, however, eventually escaped the garden and took to the wild, where they found a bounty of fruits and vegetables, including those in farmers’ fields and orchards. By 1955, the invasive snails had caused so much damage that the state’s agricultural sector decided to fight back by—wait for it—introducing another non-native snail.

Rosy wolfsnails hail from Florida, where they’ve earned a reputation for hunting down and gobbling up other snails and slugs. When other snails can’t be found, rosy wolfsnails even eat each other, resulting in the nickname “cannibal snails.” 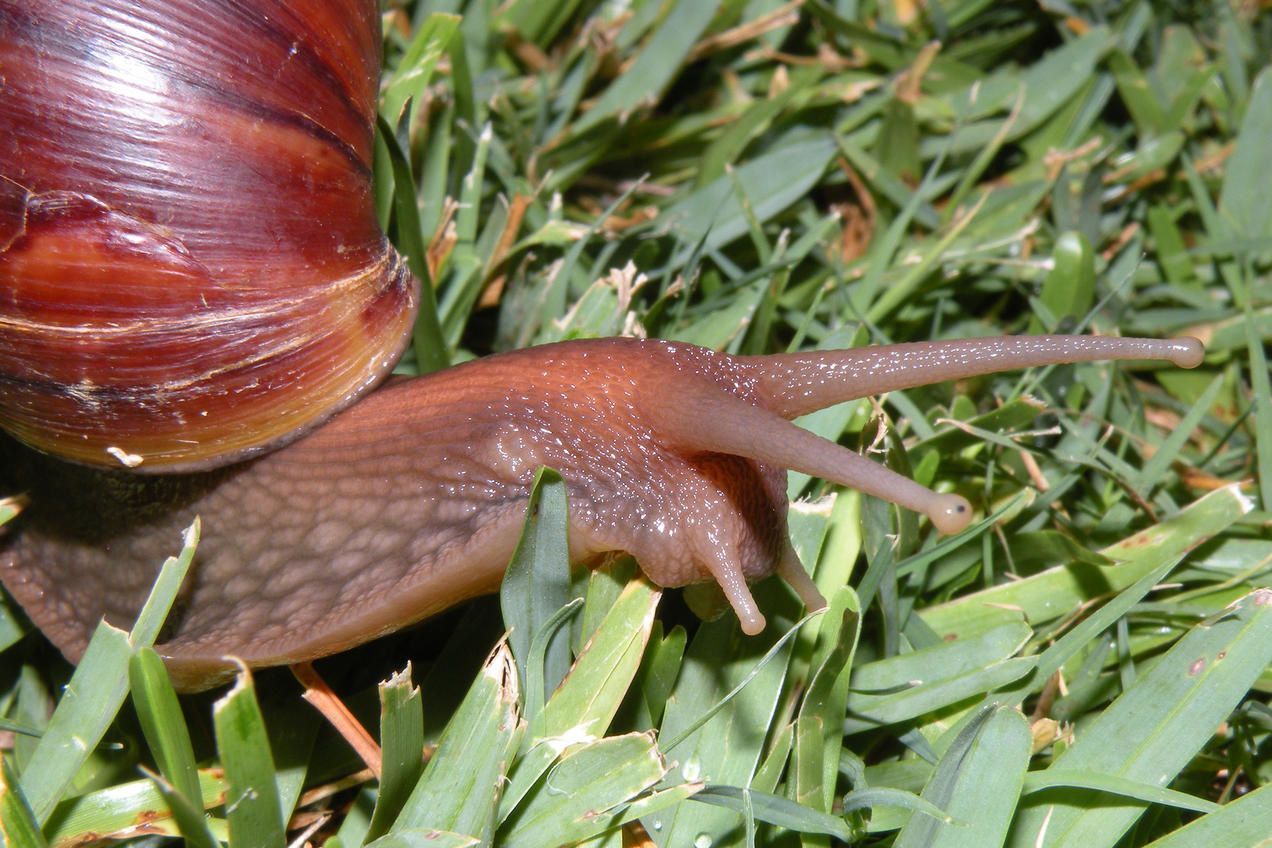 The rosy wolfsnail hails from Florida, where it has earned a reputation for hunting down and eating other snails and slugs.Marcel Holyoak via Flickr

You see where this is going, don’t you? Instead of focusing on Hawaii’s invasive giant African land snails, the rosy wolfpacks mowed down all the native snails they could find. This massacre didn’t play out just in Hawaii, by the way. A 2009 study found that of the 400 mollusk extinctions known to have occurred on oceanic islands, rosy wolfsnails were responsible for 134 of them. This is what happens when your wildlife management decisions mimic the logic of the song “I Know an Old Lady Who Swallowed a Fly.”

To be fair, cannibal snails don’t deserve all the blame. Rats, which came to Hawaii as stowaways on ships, also eat native snails, as do Jackson’s chameleons, which came from Kenya through the pet trade. And the practice of threading snail shells onto certain ceremonial leis didn’t help either. While this tradition itself probably didn’t cause any extinctions, when mid-nineteenth-century Europeans began coveting snail-shell leis as souvenirs, things got out of hand. The demand led to people gathering up the gastropods in the hundreds of thousands. (FYI: It is now a federal offense to collect native snail shells.)

So, what will happen to Hawaii’s ecology now that George and so many of his native cousins are gone? Sischo says it isn’t clear. Because these volcanic islands more or less exploded out of the sea, they never had their own species of earthworms to break down plant matter—but they did have snails to take up the job of detritivore. As these species disappear, the process by which nutrients are processed and returned to the soil will be altered in ways we don’t yet understand. The islands have other native snails, like A. apexfulva, that graze on the algae and fungi that accumulate on plants. Scientists have shown that trees with grazer snails tend to have less biofilm on them and support a greater diversity of fungi, algae and bacteria. Take the grazers away, says Sischo, and everything gets a lot more mundane, which could affect the plants’ health.

Conservationists are still searching for more Georges in the wild, but the probability of finding one is very slim and gets slimmer every day. However, there may be hope for other snails on the ropes. Hawaii’s Snail Extinction Prevention Program is currently holding in captivity 30 species from five islands. All 30 are either extinct in the wild or close to it, but unlike George, many of these survivors are getting it on.

“We are actively reintroducing four protected species now,” says Sischo, “and we have quite a bit now that we’ll be reintroducing back into the wild in the next few years. So it’s not all bad news.”

He says his organization is also “manning the lifeboat” by removing invasive species where they exist and adding predator-proof fencing to areas that are still relatively pristine.

Will future Hawaiians sing stories about saving the islands’ snails one day? Only time will tell.

2018 left us with a mixed bag of hope and foreboding. With recent history in mind, what does 2019 have in store? Here are the issues environmental advocates are watching closely in the coming year: https://t.co/VjxzXpSudz