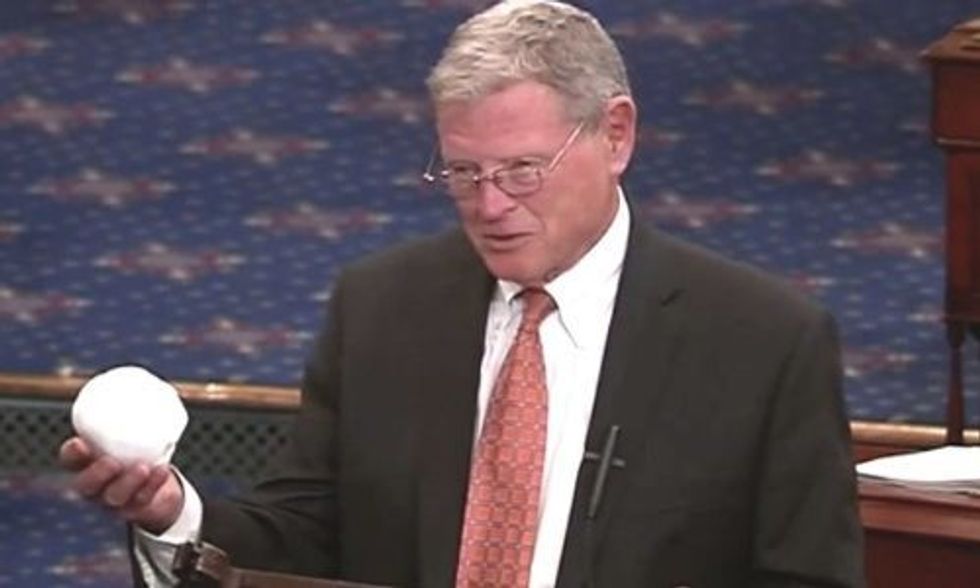 Well that's rich. As world leaders hammer out a historic deal to avoid the catastrophic consequences of climate change at the Paris climate conference (COP21) this December, they might find Congress' most outspoken climate-denier in their midst: Snowball-throwing Sen. James Inhofe of Oklahoma.

According to The Hill, the notorious climate-denying politician and author of the 2010 book The Greatest Hoax: How The Global Warming Conspiracy Threatens Your Future, is thinking of gracing the all-important United Nations climate talks with his presence. He is the chairman of the Senate’s Environment & Public Works Committee, after all.

“I don’t know if I’ll repeat what I’ve done several times before, which is to go over and be the bad guy, the one-man truth squad, and tell the truth, that they’re going to be lied to by the Obama administration,” Inhofe said.

In February, Inhofe subjected himself to widespread mockery when he tossed a snowball on the floor of the Senate, claiming he disproved global warming because it snowed.

Fellow lawmaker Kentucky Republican Representative Ed Whitfield, who serves as chairman of the Subcommittee on Energy and Power of the full House Energy and Commerce Committee, is also thinking about sending over some troops to France to help spout their message.

“We may send a group over to Paris, just to let them know that there’s another branch of government, in addition to the executive branch, on these issues,” he said.

Apparently, Whitfield wants to show negotiators that President Obama's ambitious cuts to greenhouse gas emissions could be weakened or overturned by Congress. According to The Hill, "The GOP also wants to show world leaders that the Obama administration’s pledge for the deal—a 26 percent to 28 percent cut in the United States’ greenhouse gas emissions by 2025, compared with 2005—is not possible, and Obama should not be trusted to live up to his promises."

If he attends COP21, it won't be the first time Inhofe has made his case in front of world dignitaries at an international climate conference. In 2009, Oklahoman crashed the Copenhagen talks for a few hours, confused some local reporters with his presence and hopped right back on a plane to Washington that same day after failing to secure any meetings.

A German reporter told Inhofe, "You’re ridiculous," after the Senator tried to peg the "global warming hoax" on "the Hollywood elite."