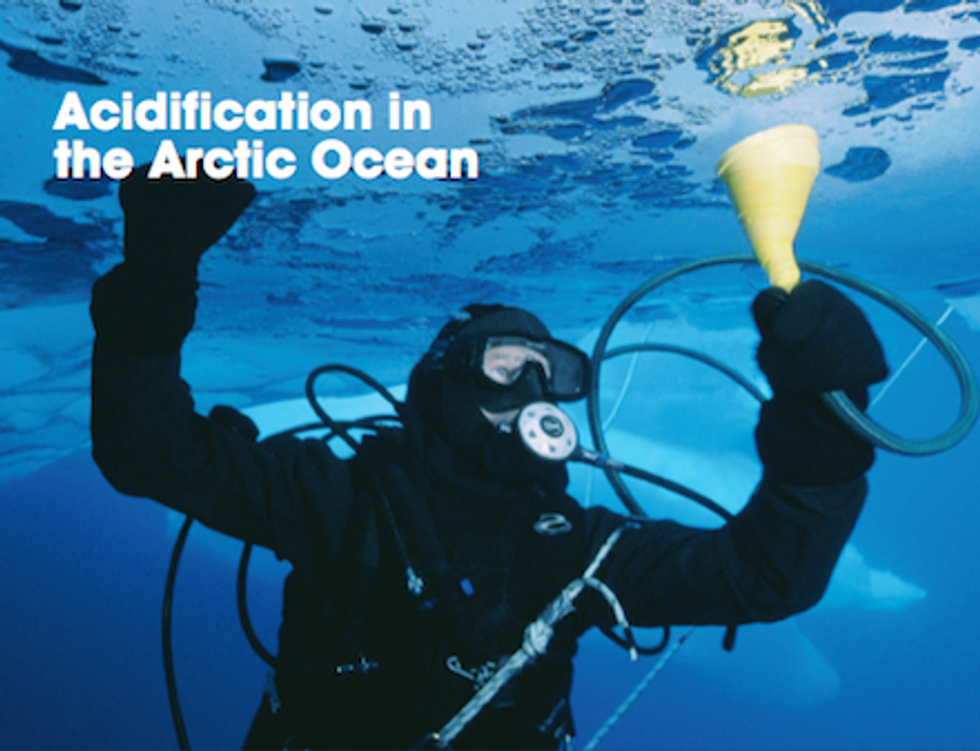 The assessment's key scientific findings are being discussed at the International Conference on Arctic Ocean Acidification this week (May 6-8) in Bergen, Norway. The assessment and policy recommendations will be presented at the Ministerial Meeting of the Arctic Council, May 15, in Kiruna, Northern Sweden.

The report warns that "Arctic Ocean acidification has the potential to affect both commercial fisheries that are important to northern economies and marine resources that are used by Arctic indigenous people." Within its programme, AMAP includes the Bering Sea where the vital pollack fishery is concentrated. According to the National Oceanic and Atmospheric Administration, the Alaskan pollack fishery is "one of the largest, most valuable fisheries in the world."

Here are the top ten findings of the report:

Scientists have measured significant rates of acidification at several Arctic Ocean locations. In the Nordic Seas, for example, acidification is taking place over a wide range of depths—most rapidly in surface waters and more slowly in deep waters. Decreases in seawater pH of about 0.02 per decade have been observed since the late 1960s in the Iceland and Barents Seas. Notable chemical effects related to acidification have also been encountered in surface waters of the Bering Strait and the Canada Basin of the central Arctic Ocean.

Key finding 2: The primary driver of ocean acidification is uptake of carbon dioxide emitted to the atmosphere by human activities

When carbon-rich materials such as coal or oil are burned (for example, at power stations), carbon dioxide is released to the atmosphere. Some of this gas is absorbed by the oceans, slowing its build up in the atmosphere and thus the pace of human-induced climate warming, but at the same time increasing seawater acidity. As a result of human carbon dioxide emissions, the average acidity of surface ocean waters worldwide is now about 30 percent higher than at the start of the Industrial Revolution.

Owing to the large quantities of fresh water supplied from rivers and melting ice, the Arctic Ocean is less effective at chemically neutralizing carbon dioxide’s acidifying effects and this input is increasing with climate warming. In addition, the Arctic Ocean is cold, which favors the transfer of carbon dioxide from the air into the ocean. As a result of these combined influences, Arctic waters are among the world’s most sensitive in terms of their acidification response to increasing levels of carbon dioxide. The recent and projected dramatic decreases in Arctic summer sea ice cover mean that the amount of open water is increasing every year, allowing for greater transfer of carbon dioxide from the atmosphere into the ocean.

Key finding 4: Acidification is not uniform across the Arctic Ocean

In addition to seawater uptake of carbon dioxide, other processes can be important in determining the pace and extent of ocean acidification. For example, rivers, sea-bottom sediments and coastal erosion all supply organic material that bacteria can convert to carbon dioxide, thus exacerbating ocean acidification, especially on the shallow continental shelves. Sea-ice cover, freshwater inputs and plant growth and decay can also influence local ocean acidification. The contributions of these processes vary not only from place to place, but also season to season and year to year. The result is a complex, unevenly distributed, ever-changing mosaic of Arctic acidification states.

Arctic marine ecosystems are generally characterized by short, simple food webs, with energy channeled in just a few steps from small plants and animals to large predators such as seabirds and seals. The integrity of such a simple structure depends greatly on key species such as the Arctic cod. Pteropods (sea butterflies) and echinoderms (sea stars, urchins) are key food-web organisms that may be sensitive to ocean acidification. Too few data are presently available to assess the precise nature and extent of Arctic ecosystem vulnerability, as most biological studies have been undertaken in other ocean regions. Arctic-specific long-term studies are urgently needed.

Key finding 6: Ocean acidification will have direct and indirect effects on Arctic marine life. It is likely that some marine organisms will respond positively to new conditions associated with ocean acidification, while others will be disadvantaged, possibly to the point of local extinction

Key finding 7: Ocean acidification impacts must be assessed in the context of other changes happening in Arctic waters

Arctic marine organisms are experiencing not only ocean acidification, but also other large, simultaneous changes. Examples include climate change (which fundamentally changes physical, chemical and biological conditions), harvesting, habitat degradation and pollution. Ecological interactions—such as those between predators and prey, or among competitors for space or other limited resources—also play an important role in shaping ocean communities. As different forms of sea life respond to environmental change in different ways, the mix of plants and animals in a community will change, as will their interactions with each other. Understanding the complex, often unpredictable effects of combined environmental changes on Arctic organisms and ecosystems remains a key knowledge gap.

Key finding 8: Ocean acidification is one of several factors that may contribute to alteration of fish species composition in the Arctic Ocean

Ocean acidification is likely to affect the abundance, productivity and distribution of marine species, but the magnitude and direction of change are uncertain. Other processes driving Arctic change include rising temperatures, diminishing sea ice and freshening surface waters.

Marine species harvested by northern coastal communities include species likely to be affected by ocean acidification. Most indigenous groups harvest a range of organisms and may be able to shift to a greater reliance on unaffected species. Changing harvests might affect some seasonal or cultural practices. Recreational fish catches could change in composition. Marine mammals, important to the culture, diets and livelihoods of Arctic indigenous peoples and other Arctic residents could also be indirectly affected through changing food availability.