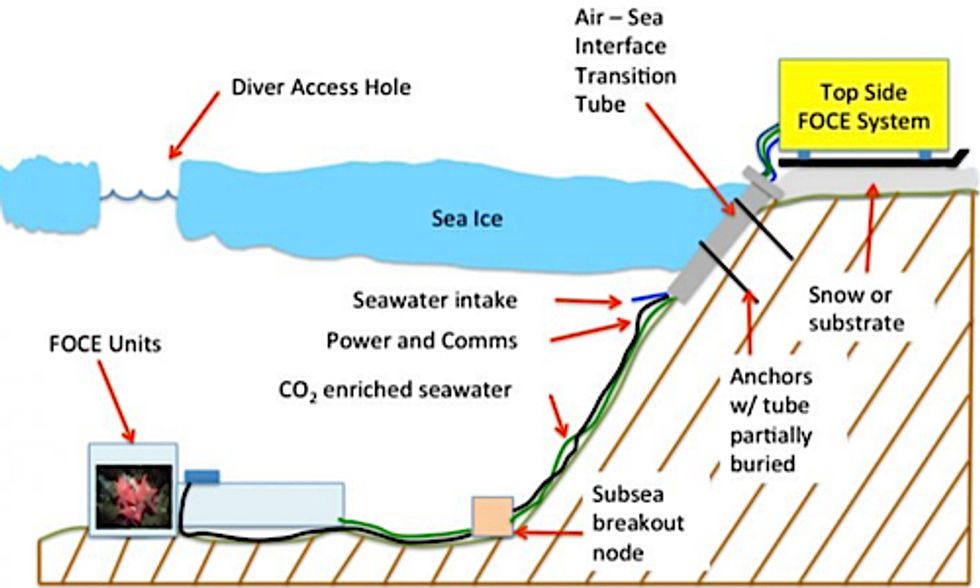 A few weeks from now, in the waters off the Tasmanian coast, marine ecologist Jonny Stark of the Australian Antarctic Division and a team of biologists and technicians will piece together an underwater laboratory. Once they get the technology hooked up and running, they will promptly disassemble the hoses, instruments, pumps and plastic panels and crate it all up. This is merely a dress rehearsal, and in much kinder conditions than those anticipated for the performance later this year in Antarctica.

“We’re going to build a bio-dome on the sea floor with a future ocean inside it,” declares project co-leader Donna Roberts, a marine biologist with Australia’s Antarctic Climate and Ecosystems Cooperative Research Center.

Within the chambers of their laboratory, which will be dropped 20 meters below the frozen crust of a little Antarctic bay just south of the Australian government’s Casey Station, Roberts, Stark and their colleagues will introduce a selection of plants and animals from the local seafloor community to the more acidic seawater conditions anticipated by 2100. In the ensuing four months, the scientists will maintain the artificial conditions in the chambers via an umbilical system fed through a hole bored in three-meter-thick ice. The results of their experiment will help illuminate a key question about future climate change: what will be the impact of dramatically changing seawater chemistry on ocean biology?

The Australian research project is one of a handful being conducted by scientists in Antarctica and the Arctic, where the reality of ocean acidification—the so-called other carbon dioxide (CO2) problem—is expected to be felt first, soon, and hard. That’s because colder ocean waters inhale and retain more carbon dioxide from the atmosphere than warmer waters. This creates higher levels of acidity and threatens a host of creatures—from tiny zooplankton to sea urchins and sea stars—that may have difficulty building shells or reproducing in waters with a lower pH.

Scientists say that frigid polar seas are on the front line of the most dramatic shift in ocean chemistry in millions of years.

“In both the Arctic and the Southern Ocean the change is happening very quickly,” says Richard Bellerby of the Norwegian Institute for Water Research, chairman of the recent Arctic Monitoring and Assessment Program acidification summary and leader of a pending acidification study in the Southern Ocean. According to Bellerby, the Arctic report documents that “we’ve already crossed some important geochemical and biological thresholds in the Arctic” These include areas at the floor of the Arctic shelf that are now inhospitable for some marine organisms due to higher acidity and lower oxygen levels, he said. Together with shifts in ice cover and ocean freshening from ice sheet melting, they have led to changing species diversity in many regions.

“The challenge is to understand the baseline, the natural workings of the ecosystems,” says Bellerby. “Because we are now observing a system undergoing rapid change, it is crucial that we get the knowledge as soon as possible. The earlier we get that, the more robust our understanding for future management to preserve these already sensitive regions.”

About one-third of the CO2 produced by human activity over 200 years of intensive fossil fuel burning has so far been swallowed up by the oceans, resulting in a 0.1 unit drop in the pH of seawater, according to the Intergovernmental Panel on Climate Change. A major summary report published by the International Council for Science last November observed that CO2 absorption by the oceans has thus far translated to a 26 percent increase in ocean acidity in the industrial era. By 2100, the shift is expected to rise to 170 percent if humanity continues on the current emissions path. As atmospheric concentrations of carbon dioxide reach levels not seen in millions of years, the world’s oceans will soon hold fewer carbonate ions, a crucial building block for marine organisms assembling their calcium carbonate shells and skeletons.

Components of the experiment include the Free Ocean CO2 Enrichment (FOCE) units linked to pumping, power and telecommunications services at the surface and protected from ice via an air-sea interface transition tube. Divers will deploy the FOCE units through a hole in the sea ice at the beginning of the season and retrieve them from open water some 4 months later. (Image: Bill Kirkwood, MBARI)

Arctic specialists warn that 10 percent of northern polar surface waters will be corrosive for aragonite, a form of calcium carbonate, by 2018, and that these hostile conditions will spread over the entire Arctic Ocean by the end of the century. The same has been anticipated in winter in parts of the Southern Ocean by the 2030s.

In Nov. 2012, the British Antarctic Survey published the first evidence that change is already affected marine organisms. Samples collected on a research cruise back in 2008 revealed that the shells of tiny marine snails—pteropods—were being dissolved by ocean acidification occurring in pockets of the Southern Ocean where natural upwelling created more corrosive conditions.

“We’re only talking in terms of 10 to 20 years that surface waters at the poles will be undersaturated”—that is, lacking in the carbonate ions used to build aragonite, says Stark. “These are the conditions where aragonite might be vulnerable and might start dissolving. There’s not a lot of research on which organisms will feel it—it’s still early days, but pteropods are one. Polar ecosystems might be the canary for what happens in other parts of the ocean.”

Maybe creatures will survive, but with damaged or weaker shells, says Stark. “For a developed animal growing, trying to extract aragonite from the water, it would take more energy,” he notes, “so it has less energy for reproduction and survival, for growth and development.”

Bellerby reckons that some species, like the pteropods, will be “outcompeted—shunted out of particular ecosystems,” with profound implications for the marine food web. Others may survive and thrive, like the mussels and other bivalves known to do well in lower pH water.

“So we have this interplay, these multi-stressors,” says Bellerby. “How will productivity change? How will warming, circulation, the timing and extent of ice cover influence the food supply? It’s just not as simple as crossing a particular acidification threshold—you have to look at the whole package.”

To date, the constraints of laboratory aquaria have hobbled efforts to grasp the big picture. Artificial conditions can never emulate the intricacies of complex marine ecosystems—the untested tolerance and adaptability of various species; the efficiency of natural buffers, such as seafloor sediment, in absorbing and offsetting change; the lottery of which populations will win and which will lose in the new scenarios.

The experiment under the sea ice at Casey Station is part of a vanguard of initiatives to conquer these obstacles by taking “the lab to the ecosystem, instead of taking the ecosystem to the lab,” says Roberts. “We want to see how the entire community responds. Our hypothesis is that things that need calcium carbonate [to build and maintain shells or skeletons] will do poorly, but plants will be stimulated. The interesting thing is what the sum of responses means to the community at large.”

Scientists in the north have also broken out of the laboratory, launching a series of giant, floating enclosures, called mesocosms, into fjords in Norway, Finland and Sweden within which they examine how more acidic conditions affect the wider marine community. One of their initial findings is that tiny plankton capitalize and thrive in the new conditions, but do so at the expense of larger species, a change that alone could throw marine ecosystems out of kilter.

Donna Roberts’ Antarctic project is the latest in an evolving family of in situ experiments using Free Ocean CO2 Enrichment (FOCE)technology developed by California’s Monterey Bay Aquarium Research Institute. While there are FOCE experiments now running at three other marine sites—off the California coast, in the Mediterranean, and in the coral shallows of Australia’s Great Barrier Reef—the fledgling Antarctic project (“antFOCE”) is the most ambitious effort yet, given the formidable challenges of working in the polar environment.

To build the laboratory, Stark and seven other divers will plunge through the ice to work in near-freezing water—about 1.5 degrees Celsius—in hour-long shifts four times a day, about the limit anyone can safely endure the punishing environment.

They will construct four, coffee table-sized polycarbonate chambers and fix them to the sea floor. Two of the chambers will function as controls, tracking natural conditions, primarily the pH level. Meanwhile the two active chambers are constantly dosed by seawater mixed with CO2 at the levels expected in the atmosphere by the turn of the century—around 900 parts per million, a rate that assumes humanity continues to do little to reduce the current high emissions trajectory.

The 2100 chemical scenario translates as about 7.8 pH—0.4 pH units lower than today’s ambient ocean pH, with the chamber technology constantly calibrating and adjusting to maintain the projected future acidity. As pH 7.8 happens to be the tipping point identified for the viability of shelled organisms in naturally lower-pH waters around volcanic vents on the sea floor, “it is going to be interesting to see what happens,” says Roberts.

In a Swedish fjord, European researchers are conducting an ambitious experiment aimed at better understanding how ocean acidification will affect marine life. Ultimately, these scientists hope to determine which species might win and which might lose in a more acidic ocean.

Filters will stop bigger fish getting in, but the chambers are otherwise porous, washed with a flow of natural light, seawater, nutrients and tiny creatures, and sitting upon undisturbed sediment, which some experts have theorized might provide a buffer against the effects of higher acidity.

Conducting these experiments in an environment that captures the natural physical and biological conditions is critical to gaining meaningful insight into how to manage the future, says Bellerby. But “it makes it much more challenging to weed out results,” he says. “You lose a certain amount of control, but that is part of the rapid learning curve.”

It’s complex, logistically fraught, expensive science. The Casey Station experiment will cost roughly $5.5 million, including transport and logistics to support the team in Antarctica. One passing iceberg and the latest experiment could be wiped out. “We’re very excited,” says Roberts. “Some of the highest reward science has some of the highest risk.”