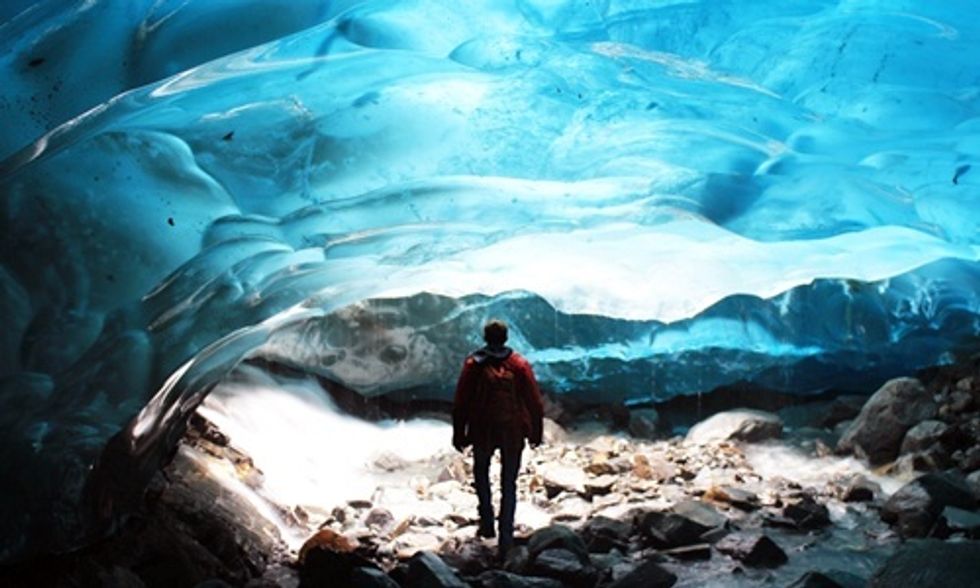 A team of researchers from National Geographic recently carried out an expedition into the ice caves inside one of Mount Rainier's craters in Washington. The expedition served three purposes: collect data to protect climbers, learn about potential alien life on icy planets and study the cave's climatology.

These caves often end up becoming places of refuge for the thousands of people who attempt to climb Mount Rainier every year. But they can be an incredibly hazardous place. Because Mount Rainier is an "episodically active volcano," these caves have pockets of poisonous gases like carbon dioxide, sulfur dioxide and hydrogen sulfide, Lee Florea, geomicrobiologist and expedition member, explained.

"These caves are being visited by recreational climbers who frequently take shelter inside the caves when they are caught on the summit by unexpected storms," Eduardo Cartaya, leader of the expedition, said. His team is collecting data that will help to create a three-dimensional map of the cave system to provide information for climbers, and to aid in search and rescue efforts.

"We want them to know and understand that yes, there are hazards in there and to know where those hazards are so that they're not trapped up there for 24 hours in a storm and find themselves in a pocket of bad air, because there wouldn't be time to rescue them in a situation like that," Cartaya explained.

Mount Rainier is only a two-hour drive from Seattle, and yet, its summit feels very remote. "The crater of Mount Rainier is often referred to as the 'backside of the moon.' It actually used to be considered for a training ground for astronauts," Cartaya explained. "And not only are we at the summit, we're under the summit inside a glacier with active volcanic activity in it. It clearly couldn't be more remote or, I guess, otherworldly or dangerous than that."

The otherworldly nature of the caves drew scientists to join Cartaya on the expedition, as they wanted to study how microbial alien life may exist on icy planets.

"One of the amazing things about these caves is that they simulate what we might find on other planets or moons in the solar system," Florea said. "They are one of the few locations where you have a blend of volcanic gases mixing with a high altitude dark icy cave, which replicates a lot of what they expect to find in Europa, the Martian ice caps or ice bodies somewhere in the solar system."

"The glacier caves on Mount Rainier circulate air from the atmosphere throughout the system and store records of the climate in the layers of ice," Cartaya said. "The work being done in the caves by researchers with Ruhr University is part of a worldwide study on the effects of climate on our ice packs and how caves contribute to the processes. We hope to relate changes in the passage dimensions to either the effects of climate or the effects of the hydrothermal system of the volcano.”

The 75 team members faced brutal conditions in the harsh environment around Mount Rainier's summit, which has an active volcanic crater just beneath, winds that can reach up to 140 miles per hour and hidden crevices that empty into passages of toxic air.

Still, the team plans to go back year after year.

"The real value of scientific studies in places like this is not just one singular snapshot of data in one day, but to record change over a long period of time. That's why we’re going to be going back up year after year," Cartaya said before adding, "All I can say [is] it’s probably one of the most exciting, stressful and rewarding experiences I’ve ever had in my life to do this."

Watch footage from National Geographic of the expedition here: