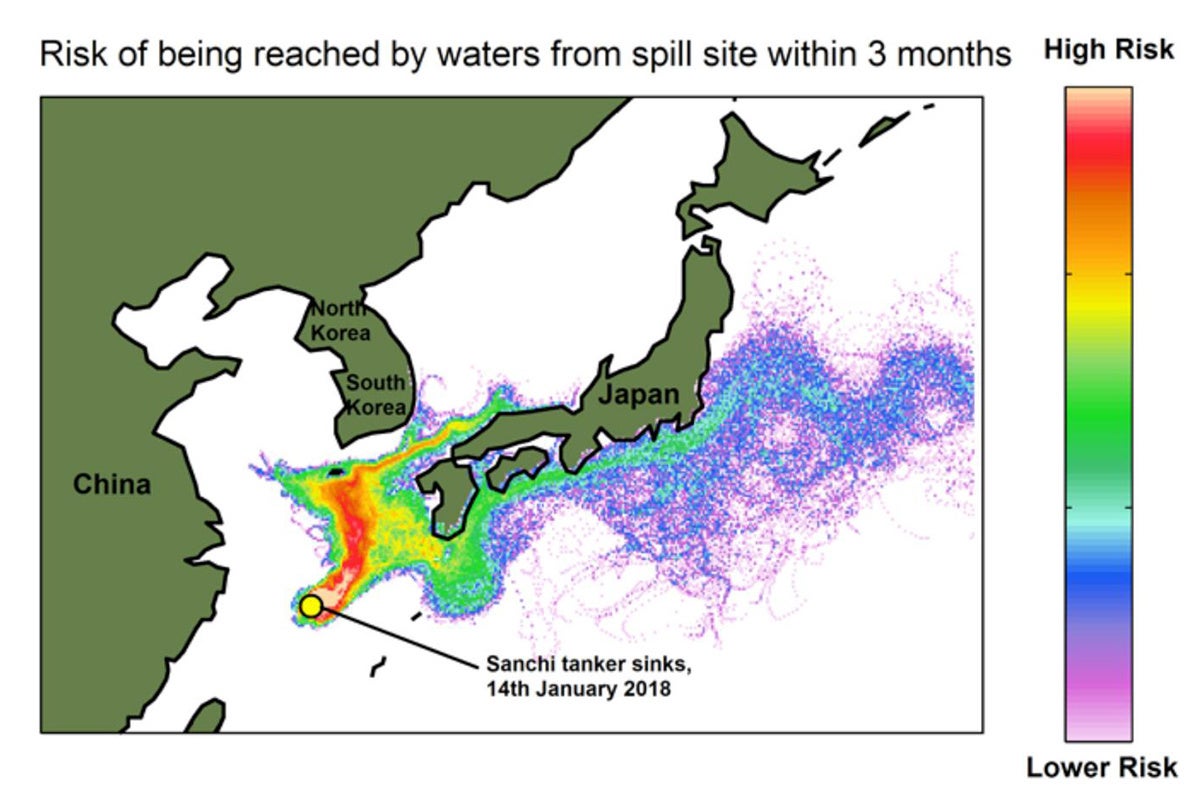 The Sanchi oil spill in the East China Sea could potentially be one of the worst tanker spills in decades, experts are warning, even though the spill has now largely disappeared from news reports.

Work by scientists from the National Oceanography Centre (NOC) and the University of Southampton, who have plotted where the condensate ends up, believe that the spill could even reach Japan within a month. In doing so, it could severely impact locally important reefs, fishing grounds and protected marine areas.

An Iranian tanker, the Sanchi sank on Jan. 14 after colliding with a cargo ship and setting fire. Thirty two members of the crew were lost.

The ship was carrying 136,000 tons of ultra-light condensate when it sank. What is puzzling scientists is where this will end up and how much damage will be caused.

The scientists from Southampton predict that the condensate could enter the regionally important Kuroshio current and then be “transported quickly along the southern coasts of Kyushu, Shikoku and Honshu islands, potentially reaching the Greater Tokyo Area within 2 months. Pollution within the Kuroshio may then be swept into deeper oceanic waters of the North Pacific.”

According to the scientists, “The revised simulations suggest that pollution from the spill may be distributed much further and faster than previously thought, and that larger areas of the coast may be impacted.”

Their recent simulations “also shift the focus of possible impacts from South Korea to the Japanese mainland, where many more people and activities, including fisheries, may be affected.”

Another issue concerning scientists is the toxic nature of condensate and how we are entering the unknown. Simon Boxall, of the University of Southampton’s National Oceanography Centre, told the BBC earlier this month, “It’s not like crude, which does break down under natural microbial action. This stuff actually kills the microbes that break the oil down.”

Indeed, as an article in the scientific journal Nature recently noted about the condensate, “The lighter petroleum that spilled has never before been released in such massive quantities in the ocean.”

Rick Steiner, a former University of Alaska professor in Anchorage and global expert on oil spills, including the Exxon Valdez, told Nature, “This is charting new ground, unfortunately. This is probably one of the most unique spills ever.”

In other news reports, Steiner, who has been outspoken since the disaster, talks of the spill being “a very big deal. There has been serious ecological injury.”

How much injury or what type, we don’t know yet. As usual with oil spills, it will take time for the impact to become truly apparent. Ralph Portier is a marine microbiologist and toxicologist at Louisiana State University in Baton Rouge. He told Nature, “Most oil spills have a chronic toxicological effect due to heavy residuals remaining and sinking over time. This may be one of the first spills where short-term toxicity is of most concern.”