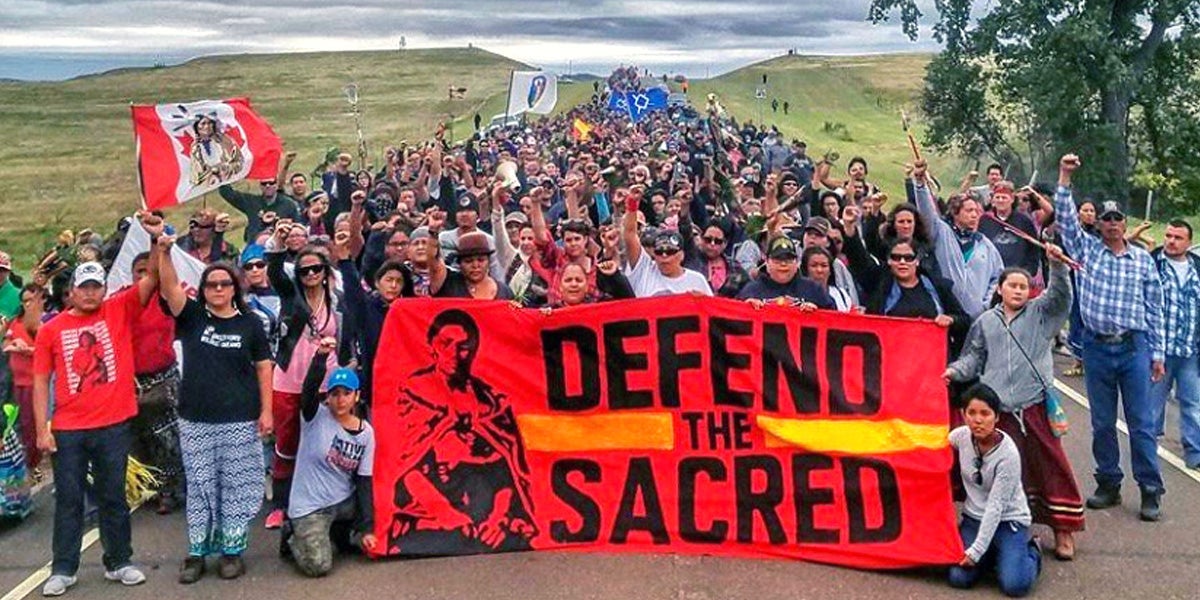 A federal judge in Washington, DC declined Tuesday to order the halt of all construction on a portion of the contentious Dakota Access Pipeline (DAPL) route that the Standing Rock Sioux Tribe had recently identified as sacred tribal burial ground, a site that was bulldozed over the Labor Day weekend by pipeline construction crews. 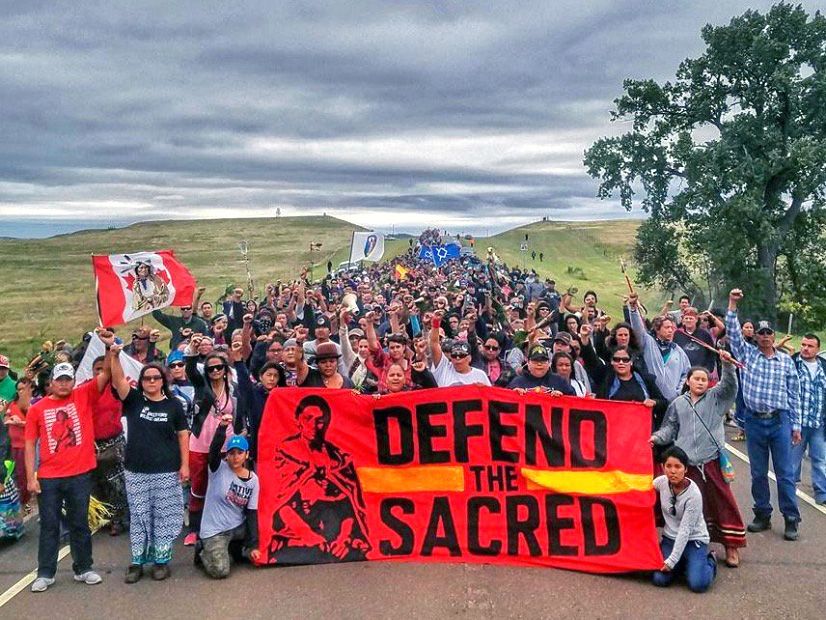 Hundreds of people marched peacefully on Sept. 4 to protest the destruction of sacred sites and burial grounds in the path of the Dakota Access Pipeline in North Dakota.Dallas Goldtooth

The ancient site was discovered only days before its destruction and was awaiting review by the state historic preservation office.

At the judge’s request, Dakota Access LLC agreed to halt construction on only a small area in contention until the judge issues a separate ruling this week on a preliminary injunction motion brought by the tribe over the pipeline.

The tribe has been locked in a legal fight against Dakota Access and the U.S. Army Corps of Engineers over a pipeline that would cross sacred sites and potentially affect water that the tribe depends on. The DAPL pipeline’s full path extends across North and South Dakota, Iowa and Illinois.

Standing Rock Sioux Chairman David Archambault II issued a statement saying the tribe was “disappointed that the U.S. District Court’s decision does not prevent DAPL from destroying our sacred sites as we await a ruling on our original motion to stop construction of the pipeline.”

The tribe had filed an emergency motion on Sunday, Sept. 4 for the temporary restraining order to prevent further destruction of sacred sites.

Tuesday’s order isn’t the end of these legal battles. Federal Judge James Boasberg is expected to rule on Friday on an injunction that would halt all pipeline-related construction near the Standing Rock Sioux Reservation.

On Sept. 3, members of the Standing Rock Sioux Tribe and their swelling numbers of supporters were on their way to a blockade wall near the DAPL construction site to sing and give prayers as the tribe had done every day for months. They would then march back to the site of their protest camp.

On Tuesday morning, however, when they heard the roar of bulldozers from less than a mile away from the construction site, many of them ran to intervene. What they encountered was a scene, many of them say, out of civil rights clashes of the 1960s.

Widely circulated video first aired by Democracy Now shows pipeline security workers using attack dogs and pepper spray on demonstrators who were protesting the bulldozing of recently identified sacred sites. By the time the security team backed down and drove off, several protesters—including a child and a pregnant woman—were bitten by security dogs and 30 suffered from the affects of pepper spray.

Local authorities called it “a riot” and blamed the protesters, not the security detail, for the incident. North Dakota Lt. Gov. Drew Wrigley has called protests by the tribe and supporters “unlawful.” According to NPR, the sheriff’s department said protesters stampeded into the construction area with horses, dogs and vehicles.

Cody Hall, a spokesperson for the Red Warrior Camp, a group allied with the Standing Rock Sioux, was on the front line of Saturday’s demonstration and tells DeSmog that the security company’s claims of injuries are “absolutely false.”

“The company says they were hit with objects which just isn’t true,” Hall said. “We had no weapons, just our voices. The video doesn’t lie. One female security guard laughed and said, ‘I told you so,’ when her dog bit one of us.” 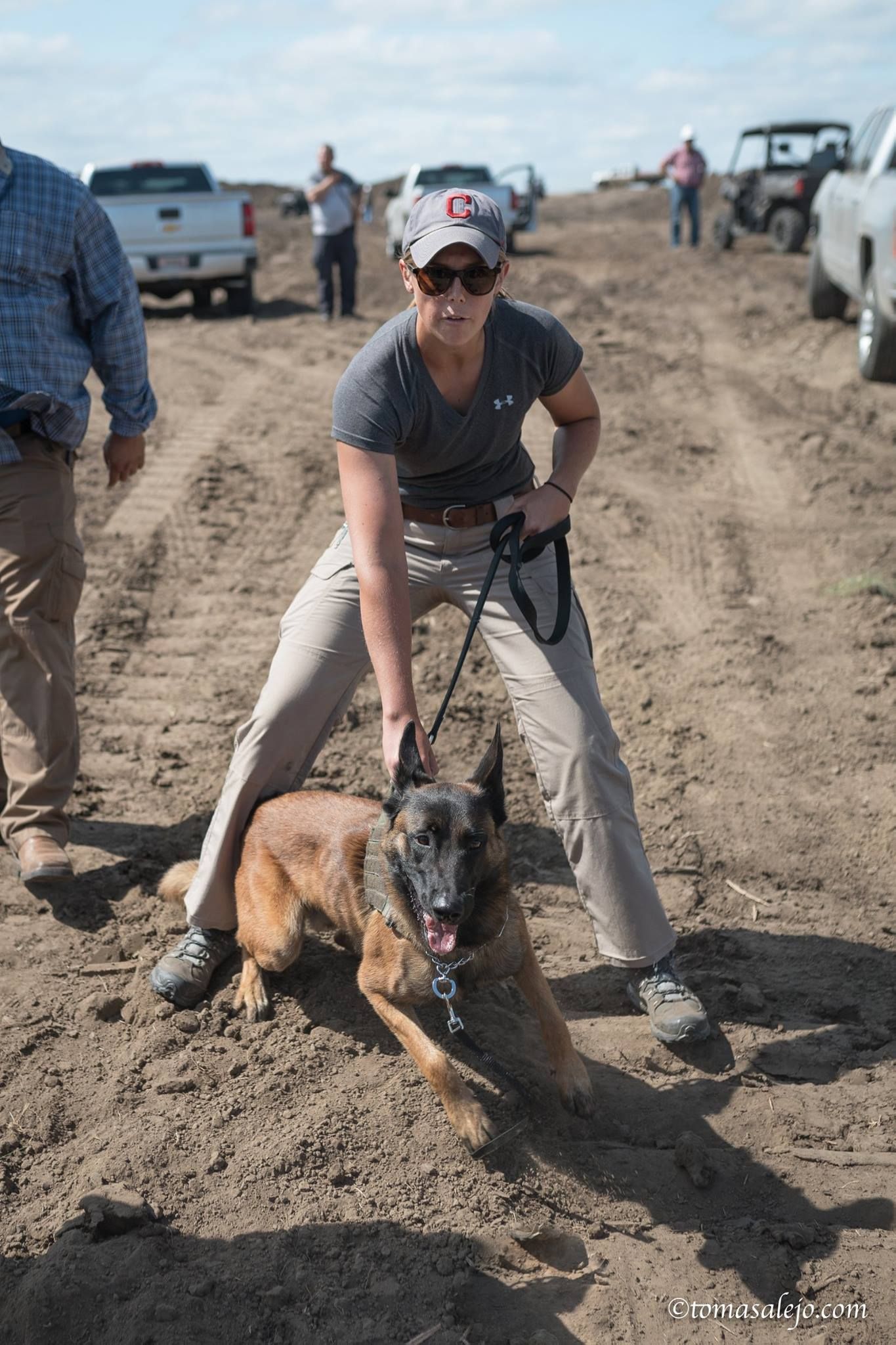 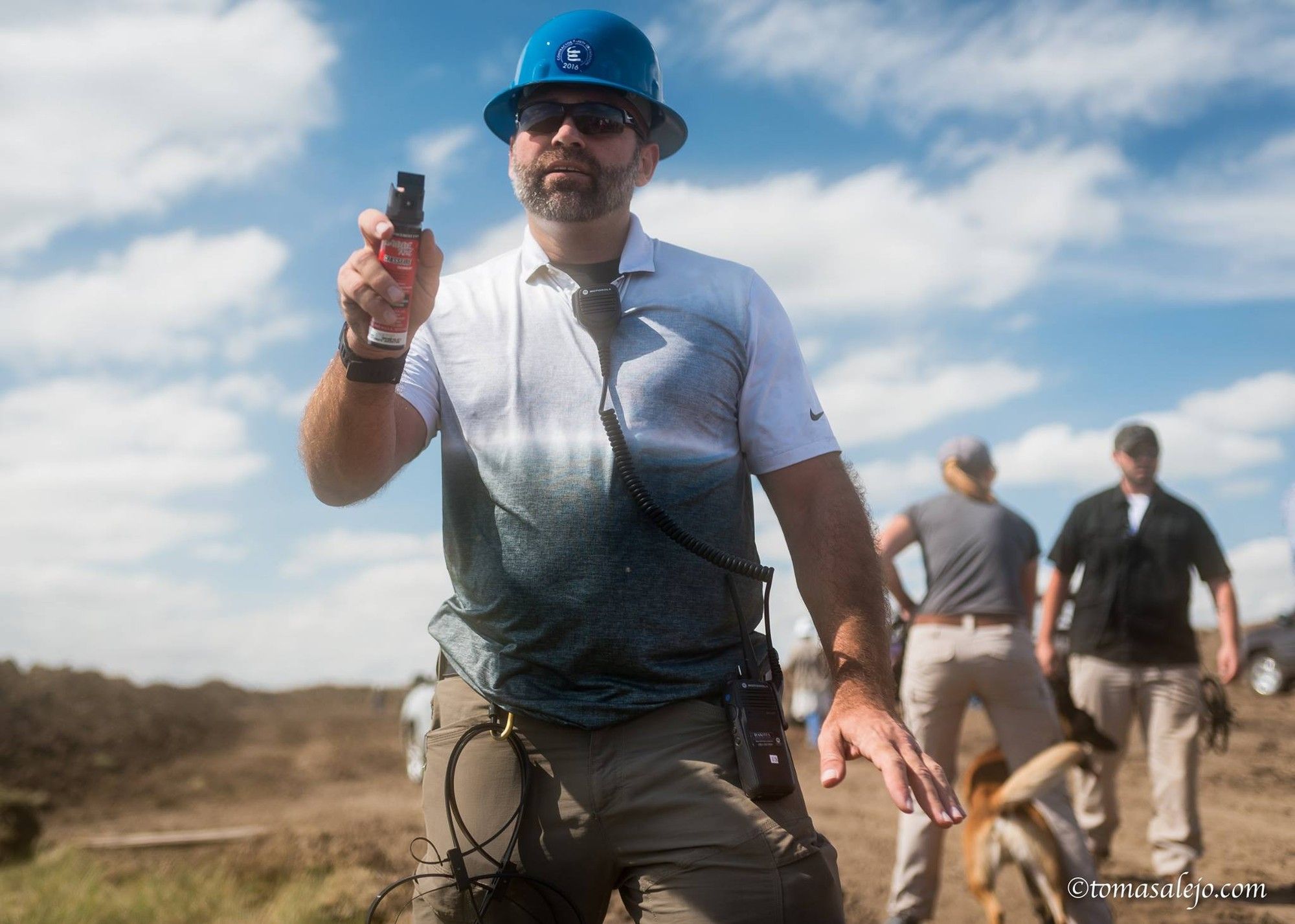 What Hall found just as disturbing was the action of the state police present. “The state police were sitting there watching the whole scene,” he said. “Not once did the police move to intervene.”

All protest actions, ongoing since April, have been peaceful, according to a tribal spokesperson.

A huge question looms. Why would Dakota Access bulldoze lands that it knew—or should have known—were sacred?

For the Standing Rock Sioux and their supporters, the answer is clear: to project power and make the tribe give up.

“They did this on a holiday weekend, one day after we filed court papers identifying these sacred sites. The desecration of these ancient places has already caused the Standing Rock Sioux irreparable harm. We’re asking the court to halt this path of destruction.”

After the initial destruction Saturday, Dakota Access workers returned to the area and dug up additional grounds before dawn on Sunday, Archambault said.

“These grounds are the resting places of our ancestors. The ancient cairns and stone prayer rings there cannot be replaced. In one day, our sacred land has been turned into hollow ground,” Archambault added.

“Dakota Access literally plowed through a burial site and a significant ceremonial site that was JUST identified by the landowner and tribal experts a few days before. This was off-reservation. The tribe filed the discovery with a federal judge that is deciding whether to grant an injunction against Dakota Access. However … in order for construction to be halted, the ND State Historic Preservation Office (SHPO) had to come and officially survey the site, because it was in their jurisdiction. So what did Dakota Access do?? They plowed through the land before the SHPO could come do their surveys.”

Many tribe members and their supporters believe that—because the company knew about the sacred sites—the bulldozers were dispatched on Saturday as an act of psychological warfare against the tribe, a way of exerting power and projecting an air of inevitability.

“(The company) knows they can just bulldoze the site, destroy the evidence and pay a fine,” Ben-Alex Dupris, a member of the Cheyenne River Sioux, whose land abuts the Standing Rock Sioux Reservation, tells DeSmog. “They can do whatever they want, but no amount of money can bring this site back.”

Two Years of “Steamrolling” the Tribe

Tribal members began protesting the pipeline construction as early as April 2016, when a group of young tribal members from Standing Rock ran from North Dakota to Washington, DC, to present a petition in protest of the construction of Energy Transfer Partners’ Dakota Access pipeline.

On Aug. 24, the Standing Rock Sioux Tribe filed suit in federal district court in Washington, DC, against the U.S. Army Corps of Engineers, which is the primary federal agency that granted permits needed for construction of the pipeline.

According to the tribe’s legal counsel, Earthjustice, the Army Corps took an illegally narrow view of its responsibilities to protect and engage the tribe when it granted the fast-track permits. The tribe further purports that pipeline construction was approved by the Army Corps without consulting the Standing Rock Sioux Tribe or conducting a full review of crucial environmental or cultural impacts.

The lawsuit alleges that the Army Corps violated multiple federal statutes, including the Clean Water Act, National Historic Preservation Act, and National Environmental Policy Act, when it issued the permits, and is demanding a halt to all construction near tribal lands until a more thorough assessment of the impacts is made.

Stephanie Tsosie, an associate attorney with Earthjustice, said the consultation process by the Army Corps of Engineers has been “inadequate at best.”

“Since 2014, when the pipeline construction was announced, the tribe has consistently reached out for consultation, but the Corps steamrolled the tribe throughout the process,” Tsosie told DeSmog.

“All the tribe wanted and what we asked the judge for on August 24 was for the tribe to have a seat at the table and for the Corps to fully explore all the risks and burdens associated with the pipeline,” Tsosie added.

In July, Dakota Access filed an unrelated lawsuit in federal court in Bismarck, North Dakota, against the chairman of the Standing Rock Sioux Tribe, one of the tribe’s elected officials and several other individuals. The company claimed that these individuals were interfering unlawfully with pipeline construction.

Allies Stand Against the Pipeline

Support and protesters have been flowing into the Sacred Stone Camp near Cannon Ball, North Dakota, since April, with a huge influx in late August. Right now there are more than five dozen Native tribes represented at the camp, which demonstrators say is starting to resemble a village.

For the Standing Rock Sioux Tribe, the pipeline is not just a spiritual crisis. They say it is a very real threat to the Missouri River watershed, which the tribe depends on. The entire Dakota Access pipeline would carry as much as 570,000 barrels of Bakken crude oil daily through the Dakotas, Iowa and Illinois.

Farmers whose land sits in the way of the pipeline are also concerned about safety and enraged about the cavalier attitude of the company. In Iowa, farmers and allies have risked arrest to take a stand against the pipeline.

Earlier this year, the Iowa Utilities Board (IUB) granted Dakota Access eminent domain across the state’s entire pipeline route, extending through 18 counties. Fifteen Iowa landowners have filed a lawsuit against the IUB, challenging its eminent domain authority and “public utility” claims behind Energy Transfer Partner’s seizure of their land. The same company has used a similar argument to seize land for another pipeline in Pennsylvania.

Last week, the United Nations Permanent Forum on Indigenous Issues called on the U.S. and Energy Transfer Partners to respect the Standing Rock Sioux’s objections to the project and called for a “fair, independent, impartial, open and transparent process to resolve this serious issue and to avoid escalation into violence and further human rights abuses.” 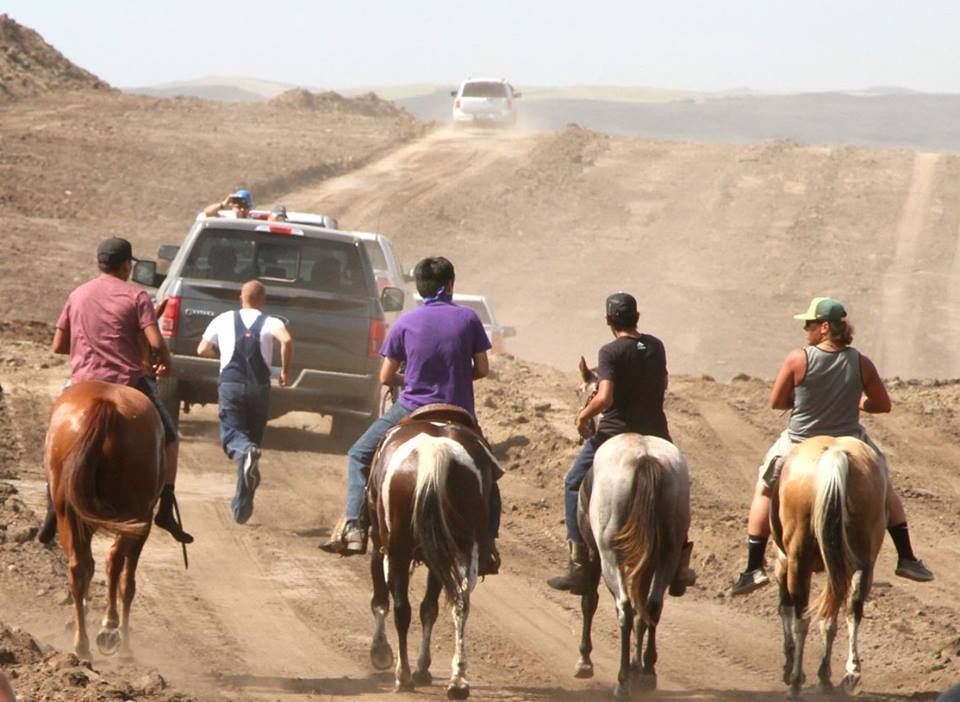 “This is the mentality of the companies,” DuPris said. “Do whatever they want, don’t worry if it’s legal, pay a fine later. This should be a red flag about the safety of the water supply. How would they respond if there is a spill? Pay a fine and keep doing what they’re doing.”