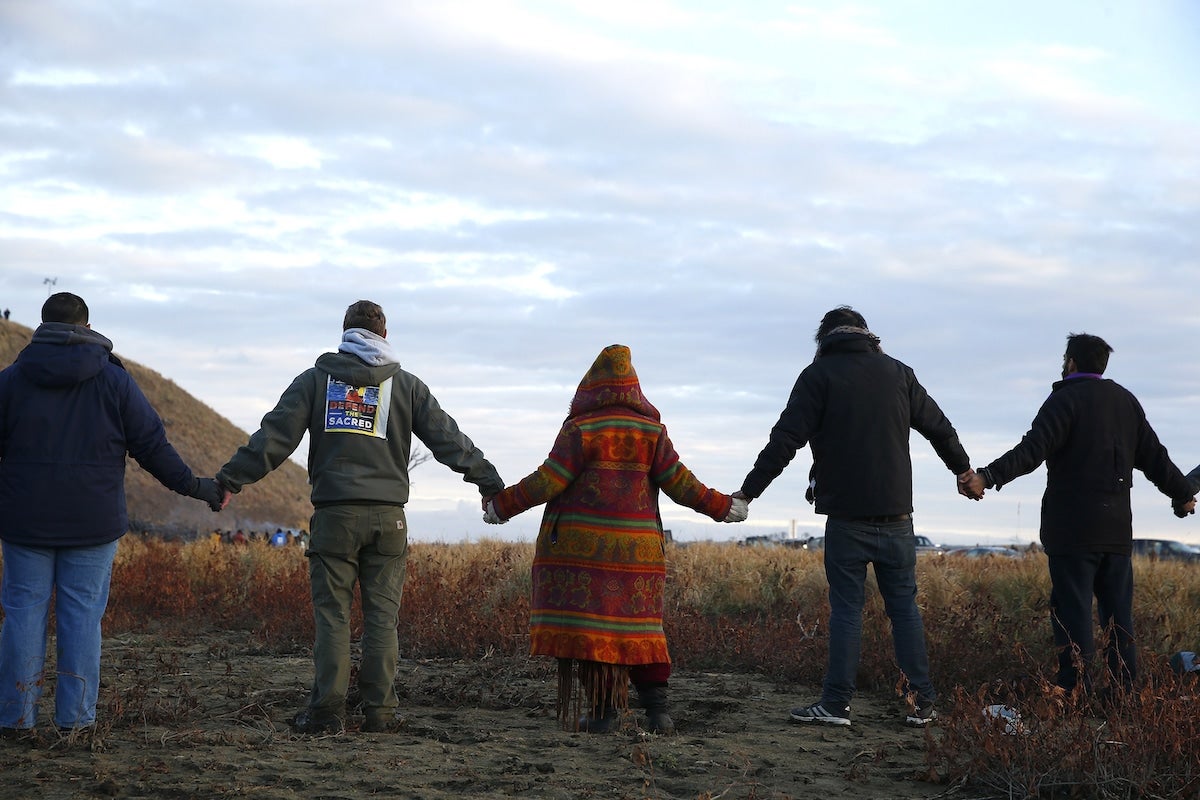 Water protectors join hands in prayer after a day's protest against the Dakota Access Pipeline at Standing Rock in Cannon Ball, North Dakota on Nov. 24, 2016. Jessica Rinaldi / The Boston Globe via Getty Images

The U.S. Supreme Court has refused to consider an appeal by Energy Transfer, the Dallas-based operator of the Dakota Access Pipeline (DAPL), over a 2020 ruling requiring an environmental review of the oil pipeline, The Guardian reported.

The lawsuit was brought by the Standing Rock Sioux Tribe who — along with the Cheyenne River Sioux Tribe, the Oglala Sioux Tribe and the Yankton Sioux Tribe — has opposed the pipeline for years. The decision by the Supreme Court means that the U.S. Army Corps of Engineers must continue to conduct the environmental review and put together an environmental impact statement (EIS) for the pipeline.

The decision is a victory for Tribes and environmentalists seeking to shut the 1,172-mile pipeline down for good.

“The litigation concerning the pipeline is over, but the fight continues,” said EarthJustice attorney Jan Hasselman, who represents the Standing Rock Sioux Tribe, as reported by The Guardian.

The legal fight over the pipeline began in 2016 when permits for it to cross the Missouri River were denied by the Obama administration. An EIS to examine its impact on tribal treaty rights and to explore different routes the pipeline might take was ordered.

When former President Donald Trump came into office he signed an executive order to speed up construction of the pipeline, which was finished in 2017.

The Standing Rock Sioux Tribe sued and a federal judge found that the Army Corps of Engineers had failed to consider the effects an oil spill might have on “fishing rights, hunting rights, or environmental justice, or the degree to which the pipeline’s effects are likely to be highly controversial,” as The Guardian previously reported. A new environmental review was ordered.

Per the decision by the lower court requiring a more in-depth environmental review, the Army Corps of Engineers must look at the area of the pipeline that goes under Lake Oahe, on the border of North and South Dakota, reported The Guardian. The lake is a sacred place for the tribal communities that depend upon it for water and sustenance.

The Tribes have concerns that an oil spill could contaminate its water supply should the pipeline break, as The Associated Press reported.

Energy Transfer and the Army Corps of Engineers say that the pipeline, which runs from North Dakota to Illinois, is safe.

The Dakota Access Pipeline will keep operating as the environmental review is conducted, but in court records Energy Transfer said that the pipeline continued to be “vulnerable to a shutdown,” as reported by Reuters.

According to the U.S. Army Corps of Engineers, the environmental review process should be finished later this year.

“We call on the administration to close the pipeline until a full safety and environmental review is complete. DAPL never should have been authorized in the first place, and this administration is failing to address the persistent illegality of this pipeline,” said Hasselman, as Reuters reported.