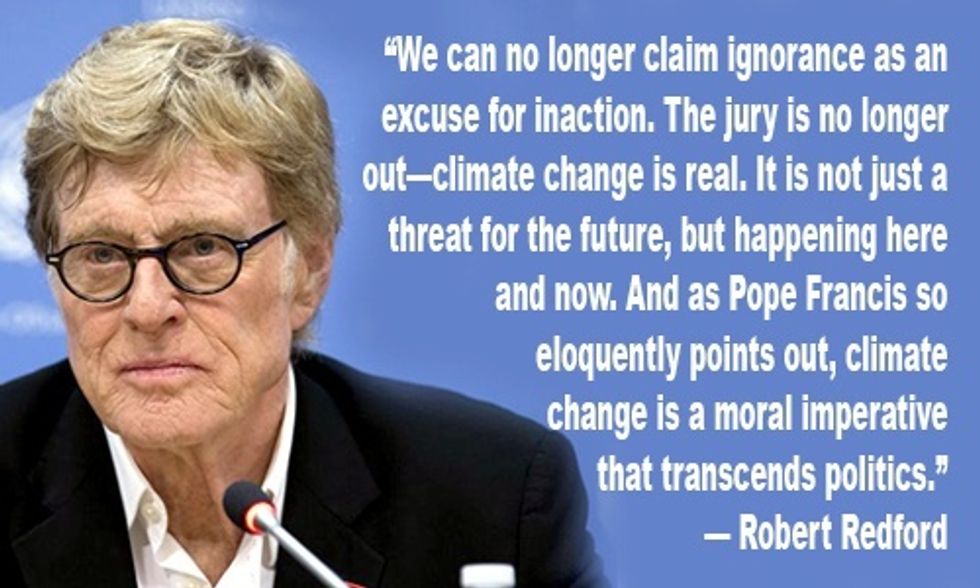 Pope Francis’ address to Congress will go down in history as a day when the needle finally moved on climate change. The pontiff’s timely message of more dialogue and less discord, respect for life in all of its stages, and a call to protect our common home was irrepressible and impossible to ignore. Sometimes you need a friend to tell you the truth. It took someone from outside the U.S. to come and remind us who we are—nd who we are supposed to be.

The choice has never been clearer. If we carry on polluting our planet with dirty energy, our children will pay the greatest price. Filthy air is already killing hundreds of thousands every year. Flooding, drought, wildfires and hurricanes—all you have to do is open your eyes to see the damage being done, and it’s going to get worse.

We can no longer claim ignorance as an excuse for inaction. The jury is no longer out—climate change is real. It is not just a threat for the future, but happening here and now. And as Pope Francis so eloquently points out, climate change is a moral imperative that transcends politics.

My sense of urgency is growing, but so is hope for the future. The clean energy revolution is taking off, creating a healthier future for all our families. California is on the front line of drought and wildfires, but it’s also taking the lead in the race toward 100 percent renewable energy. The mayors of San Francisco, San Diego and San Jose are well on the way to this goal, and Los Angeles could soon join them. Some of the world’s largest companies—Google, Apple and Facebook among them—are all committed to going 100 percent clean, investing billions every year to make this future a reality.

Fifty-five countries around the world already get most of their power from renewables. Villages across India and Africa are being lit up by clean energy. The business case is as strong as the moral argument, with the pope himself saying that fossil fuels need to be replaced “without delay.” But while the dirty establishment still sings its siren song, bold leadership is needed to seize these opportunities.

This is the call of our generation. The Global Goals—signed at the United Nations last week – are a new universal declaration of rights for a world freed from the ravages of poverty, inequality and climate change. For the first time ever, they commit to the goal of “affordable, reliable, sustainable and modern energy for all.”

Next in December, world leaders will meet in Paris to hash out a global treaty to prevent runaway climate change. More than fifty countries that are together responsible for the majority of global emissions have already submitted plans, and consensus is building around a goal to mark the beginning of the end of the fossil fuel era.

Citizens must make our voices heard—without public pressure, politicians can fall short. The Global Goals campaign is working to tell everyone about this vision of a new development path, and to help the world’s seven billion people to hold our leaders accountable.

Decades ago, I made a commitment to myself to raise whatever small voice I had to make a change. Today we can join our voices around the world like never before and set the agenda for presidents and prime ministers.

But the most important action starts close to home. Most of us today live in cities, which account for more than 70 percent of global CO2 emissions, and are found mostly in vulnerable and coastal areas. Cities like Los Angeles, Paris and London can lead the way on climate change, and cities like Sydney, Stockholm and Bogota are already on the road to 100 percent clean energy.

Groups such as the Compact of Mayors are doing impressive work on everything from electric buses to eco-roofs and LED streetlights, reaping savings for their budgets and their inhabitants.

So here’s my ask of you. Please join me by using your own voice. Search out the Global Goals and share them with your friends and leaders. Support the transition to clean energy in your own community. Help move the needle and hold your leaders—from mayors to ministers—accountable. This is our only planet, our only source of life. If we join together, we can become who we are truly supposed to be.

Robert Redford is an actor, director and trustee of the Natural Resources Defense Council (NRDC). This article originally appeared on MSNBC.