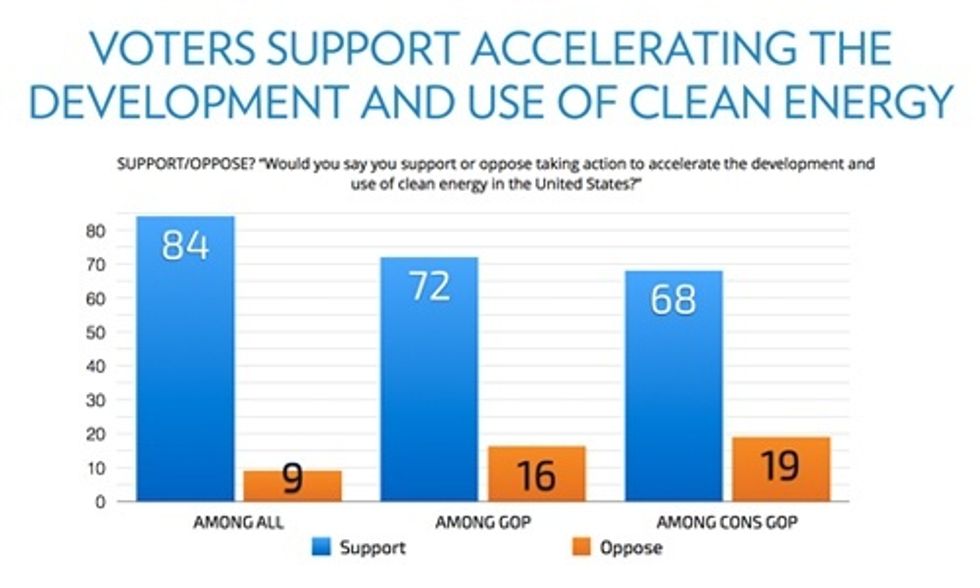 A recent survey conducted by three Republican pollsters—Echelon Insights, North Star Opinion Research and Public Opinion Strategies—found that only 54 percent of Republicans believe climate change is real and that mankind plays a role in it.

A study from July conducted by the Pew Research Center put those numbers much lower: only 27 percent of Republicans believe climate change is real and manmade, compared to 71 percent of Democrats and 87 percent of scientists who are members of the American Association for the Advancement of Science.

Congressman Luis V. Gutierrez (D-Ill.) believes these numbers are a reflection of the Republican party and its propensity to remain stagnant on important issues that call for legislative action.

“There’s plenty of information, scientific information, that human beings are causing climate change, that’s it’s an issue we must address, that Mother Earth needs our attention," Gutierrez said in a phone interview. "The Pope knows it when he came to see us. He said, ‘The planet belongs to all of us and we should be good caretakers.’ What do the Republicans say? ‘It’s a hoax, we’re not going to do anything.’"

Some GOP leaders have begun to speak up in favor of taking action on climate change. North Carolina businessman Jay Faison, a self-proclaimed conservative Republican, has spent $165 million on ClearPath, a non-profit foundation aimed at promoting climate change initiatives that would appeal to Republicans. He has plans to donate another $10 million to lobby for these policies.

Former governor of New York George Pataki and senators Kelly Ayotte (R-N.H.) and Lindsey Graham (R-S.C.) are among a few notable GOP leaders who have broken from the status quo of Republican climate denial.

Though the scientific evidence for climate change and the link with human uses of fossil fuels is widely accepted by the scientific community, the political parties remain starkly polarized on the issue.

“I think that in the House setting itself, the contrast of how our Democratic caucus approaches these issues compared to the Republican majority caucus, is our approach is about an all-of-the-above strategy, diversity in the fuel mix, accepting not only the reality of climate change, but working to impact human-inspired climate change outcomes,” Rep. Paul Tonko (D-N.Y.), who serves on the Energy and Commerce and the Science, Space and Technology committees, said in a phone interview. “We contrast that with a 'drill baby drill' mentality of the Republican majority caucus. Drill more, wherever you can offer the opportunity and a heavy reliance on fossil based fuels, on oil and the continuation of coal.”

The agreement made at the Paris climate conference, which took place from Nov. 30 to Dec. 11, provides a great opportunity for the U.S. to affirm its status as a climate leader. Making climate change a more bipartisan issue at this historic time could serve as a catalyst to help move the international community to a climate solution, but a lot of ground needs to be covered in order to depoliticize the issue.

Tonko emphasizes the need for dialogue between parties. “I think we need to hear about ways we can transition or transform energy outcomes and equating that to a smarter, perhaps more cost saving outcome," he said. "We can do this by relating to one another that sound stewardship of the environment and creating jobs aren’t diametrically opposed, but that they are often addressed in tandem."

The Trans-Pacific Partnership also provides an opportunity for the U.S. to assert its leadership in global action on climate change. Negotiations between the U.S. and 11 other Pacific Rim nations recently came to a conclusion after eight years , but President Obama faces a tough fight to secure ratification from Congress due to the shortfalls of the pact asserted by both parties. Environmental organizations such as the Sierra Club, Natural Resources Defense Council, Greenpeace and Friends of Earth have criticized the agreement for its potential threats to the environment.

“I’m concerned that without across-the-board equal standards for environmental outcomes, it can set back the international effort,” Tonko said. “We need to make environmental stewardship and environmental standards part of the overall agreements so that we’re working on a level playing field and actually using trade opportunities to grow the carbon emission reduction agenda as significantly as we can.”

Watch Tonko offer his support for the international Paris climate change agreement in an address to the House of Representatives: