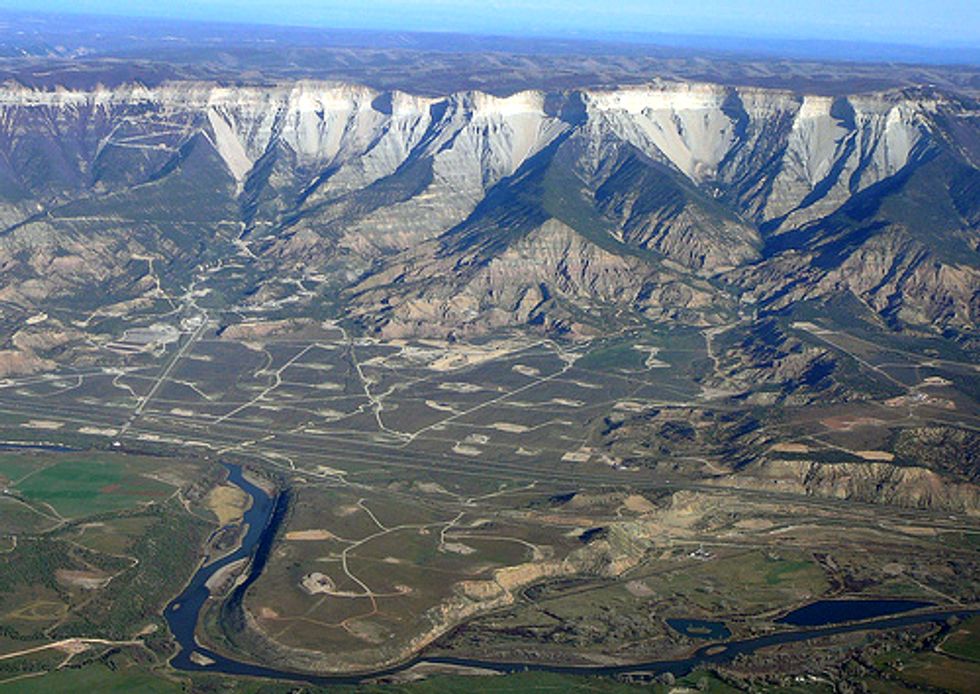 Aerial view of the Roan Plateau in western Colorado, taken on April 17, 2007. Natural gas and oil wells in the Rulison Field (part of the larger Piceance Basin energy development) cover the foreground at the base of the Plateau. Photo courtesy of EcoFlight / SkyTruth

The Republican Governors Association (RGA) along with the Republican Attorneys General Association (RAGA) sent a sent a letter to President Obama today, telling him that the federal government should abandon a Bureau of Land Management (BLM) proposal to create more transparency for natural gas fracking operations.

But even such lax standards are too much for the dirty energy industry’s friends, and they believe that the federal government is overstepping its bounds on the matter. From their letter:

The strong and efficient track record of states to regulate oil and natural gas production—as well as the rule’s significant and destructive impacts on our states—should not be ignored, and needs to be taken into serious consideration …

The BLM’s proposed rule only will discourage exploration and production on federal and Indian lands, potentially costing the federal government—and states that share in federal royalties—billions of dollars in revenue. The BLM rule places sweeping new regulations on hydraulic fracturing and related operations without any demonstrated problems that might need to be addressed.

In sum—the RGA and RAGA believe that any regulations and standards should be left in the hands of the state, not the federal government. But they couldn’t be more wrong. According to the Sierra Club’s Fracking Regulatory Action Center, very few states have even proposed rules for the fracking industry, and even fewer have put rules into effect.

The argument that RGA and RAGA are trying to make is that the federal government should leave the issue to the states to decided, which is a very common theme among Republican politicians. They firmly believe that states should be in charge of what happens within their boundaries, which is completely understandable. And while the letter to the president may give the appearance of adhering to the Party platform of “limited federal government,” if you look beneath the surface the real motivation becomes clearly visible.

The letter to Obama is signed by two people—Republican Louisiana Governor Bobby Jindal and Oklahoma Attorney General E. Scott Pruitt. Jindal has taken in more than $300,000 from the oil and gas industry, and Pruitt (mostly from his tenure in the OK State Senate) has taken in a little more than $7,000. And those two are just the current mouthpieces.

The letter that was sent this week is actually just a follow up to one sent several months ago by the RGA, sent and signed by Virginia’s Republican governor Bob McDonnell. McDonnell’s donations from the oil and gas industries put the others to shame, as he has taken in more than $3 million from the dirty energy sector during his tenure in politics.

And, according to the Sierra Club’s Fracking Regulatory Action Center, none of these states currently have rules proposed or pending or on the books to reign in the fracking industry.

The bottom line is that if rules do not come from the federal level, they will not come at all.  History doesn’t lie, and the signatories of this letter have had more than enough time to craft rules for the industry, but they have failed.