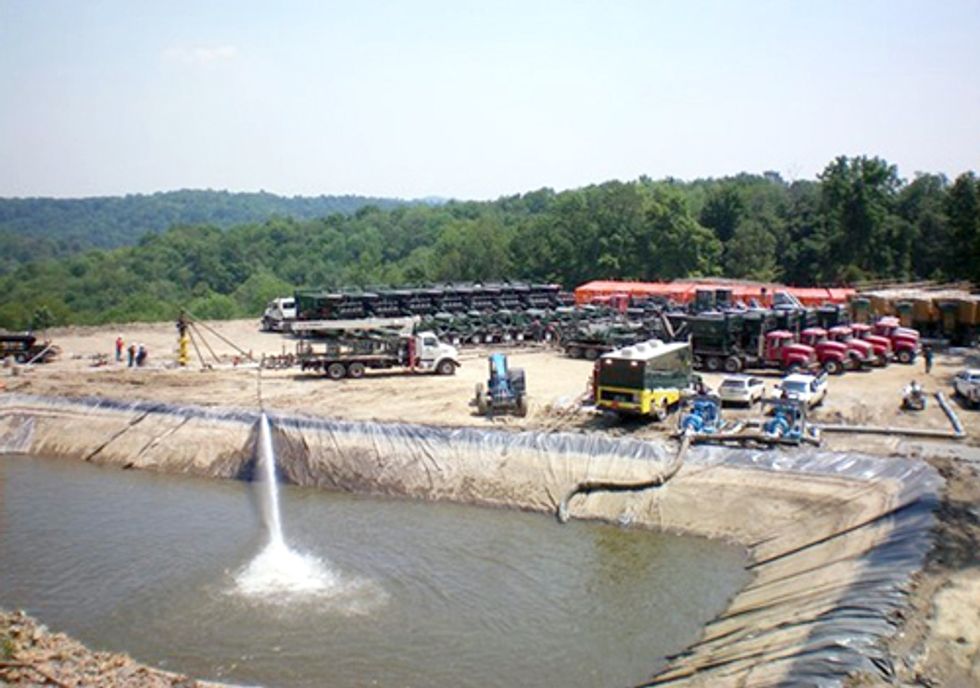 All currently available options for dealing with contaminated wastewater from fracking are inadequate to protect human health and the environment, but stronger federal and state protections can better safeguard against the threats posed by this byproduct, according to a new report from the Natural Resources Defense Council (NRDC). The report reveals how gas companies in Pennsylvania disposed of more than 30 million gallons of wastewater last year and details the dangers presented by the disposal methods used.

“Contaminated wastewater has long been one of our biggest concerns about fracking, and this report confirms that current practices put both the environment and public health at risk,” said NRDC attorney Rebecca Hammer. “Americans shouldn’t have to trade their safe drinking water for fuel. We need strong safeguards on the books to ensure oil and gas companies aren’t polluting our rivers, contaminating our drinking water or even risking man-made earthquakes when they come to frack in our communities.”

The report, In Fracking’s Wake: New Rules Are Needed to Protect Our Health and Environment from Contaminated Wastewater, represents one of the most comprehensive reviews to date of the available options for disposing high-volume wastewater from fracking. It analyzes wastewater disposal practices in Pennsylvania last year, and provides recommendations for better protecting public health and the environment nationwide. It was co-authored by NRDC and an independent scientist.

The five most common disposal options for fracking wastewater currently in use are: recycling for additional fracking, treatment and discharge to surface waters, underground injection, storage in open air pits, and spreading on roads for ice or dust control. All of these options present significant risks of harm to public health or the environment. And there are not sufficient rules in place to ensure any of them will not harm people or ecosystems.

Some of these methods present such great threats that they should be banned immediately. These methods include treatment at municipal sewage treatment plants and subsequent discharge into surface waters, storage in open air pits and road spreading. Meanwhile recycling for reuse in fracking operations and underground injection into properly designed and sited disposal wells (that better protect against groundwater contamination and seismic activity) hold the most potential for improvement if strong safety standards are instituted for these methods.

Treatment at industrial facilities faces significant hurdles that may also be addressed with improved safeguards. But it would still remain a less preferable disposal method for a number of reasons, perhaps the most significant of which is the risks it would still pose to people’s health in the event of a misstep, as the treated wastewater is dumped into waterways that provide drinking water.

In Pennsylvania, a majority of the state’s wastewater last year was released into bodies of water—including drinking water supplies—as a result of poor treatment practices. More than half of all fracking wastewater was sent to treatment plants—either industrial facilities or municipal sewage plants. Of this, about 10 percent—or more than 2 million gallons—was sent to facilities that that the state has exempted from its most current water pollution limits, meaning it could be discharged with higher levels of contaminants than waste processed at updated plants.

When this wastewater is sent to municipal sewage facilities, harmful chemicals and other pollutants are merely diluted, rather than removed, and then released into surface waters, posing serious threats to the state’s rivers, lakes and streams, as well as drinking water supplies. Industrial facilities, too, are often not designed to treat the contents of the wastewater, and can also release it into waterways or send it for reuse, after it is processed. Complete information about where industrial facilities sent processed wastewater in Pennsylvania last year was not made available by the state.

Additionally, about one-third of Pennsylvania’s fracking wastewater in 2011 was recycled for reuse in fracking, and about 10 percent was disposed of by underground injection (the majority of which took place in Ohio). The remaining less than 1 percent was reported to be in storage pending treatment or disposal, though information was not available on whether it was in open air pits or enclosed tanks. An unknown amount was applied (typically after only partial treatment) to roadways for ice or dust control, where it is often carried into nearby waterways when it rains or snow melts.

The problem of what to do with this byproduct is growing as the volume of wastewater continues to increase rapidly with the expansion of fracking in the Marcellus Shale formation and nationwide. In Pennsylvania alone, total reported wastewater volumes more than doubled from the first half of 2011 to the second half.

The wastewater disposal methods most commonly used in Pennsylvania differ largely from other parts of the country. On average nationally, 90 percent of wastewater is disposed of in injection wells. The Marcellus Shale region, however, poses particular problems because the geology cannot accommodate large volumes of injected wastewater. Therefore, gas companies there have to ship large quantities of it elsewhere.

“Pennsylvania and the entire Marcellus Shale region have geological limitations that make wastewater disposal a particularly vexing problem for the area,” said Kate Sinding, senior attorney at NRDC. “But the lessons learned there are applicable nationwide. It is critical states in this region that are already fracking clean up their act fast. And states like New York, where gas companies are still knocking on the door, must not let them in until they get this right.”

The threats posed by these disposal methods underscore the need for stronger state and federal safeguards against pollution from contaminated fracking wastewater. These improvements include (a) closing the loophole in federal law that exempts hazardous oil and gas waste from treatment, storage, and disposal requirements applicable to other hazardous waste, and (b) improving standards for wastewater treatment facilities and the level of treatment required before the processed water is discharged into bodies of water.

In states like New York where fracking is not yet active, this means the activity should not move forward there until these issues, and other environmental and public health concerns, are properly addressed. Where fracking is already taking place, it underscores the need for new environmental and public health standards, as well as enforcement, to overhaul the way industry is disposing of this waste and otherwise operating in our backyards.

Wastewater contains a variety of potentially harmful pollutants that can be toxic to humans and aquatic life, radioactive, or corrosive if they are released into the environment or if people are exposed to them. They can damage ecosystem health by depleting oxygen or causing algae blooms, or interact with disinfectants at drinking water plants to form cancer-causing chemicals. These pollutants include salts, oil, grease, metals, naturally occurring radioactive material and a cocktail of chemicals used in fracking.

Fracking involves using blasting high volumes of water and sand, mixed with undisclosed chemicals, into the ground to break apart rock and release previously inaccessible pockets of natural gas. Wastewater is created when that water mixture returns to the surface immediately after fracking, and continues to emerge from the well after production begins along with polluted water contained naturally within the underground rock formation.

The full report is available online by clicking here.