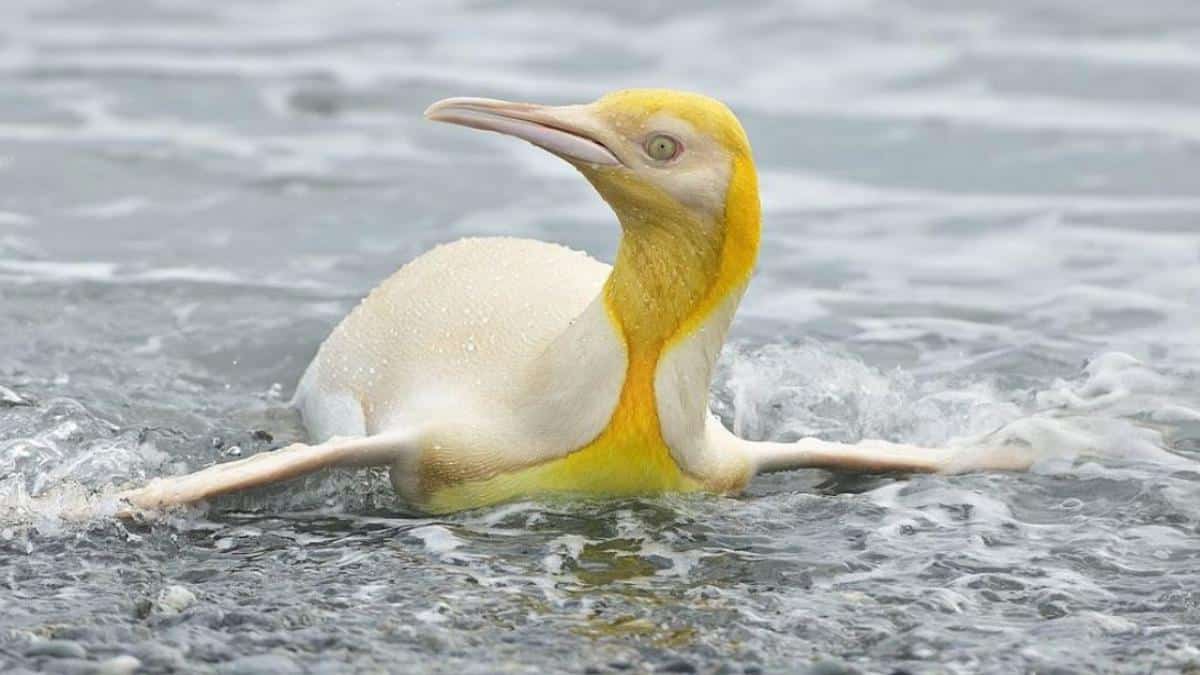 Belgian wildlife photographer Yves Adams snapped the shot in December 2019 on an island in South Georgia during a two-month expedition, The Independent reported. However, he first posted the photograph on Instagram this month.

“While unpacking our rubberboats merely after landing on a remote beach on the island of South-Georgia, this leucistic King penguin walked up straight to our direction in the middle of a chaos full of Sea elephants and Antarctic fur seals, and thousands of other King penguins,” Adams wrote in his post. “How lucky could I be!”

Leucism is a genetic mutation that causes some but not all of an animal’s melanin to disappear, Live Science explained. King penguins typically have black and white feathers with a yellow bow-tie-like stripe on the collar. Melanin, or dark pigment, is responsible for the darker feathers. While pigment anomalies in penguins are rare, they can be either melanistic (all black), albanistic (all white) or leucistic (a mix of both).

Dee Boersma, a University of Washington conservation biologist who was not a part of Adams’s expedition, told Live Science that she agreed with his diagnosis.

However, Kevin McGraw, an integrative behavioral ecologist at Arizona State University who also was not a part of the expedition, was less sure, as he told Live Science:

“It does look albino from the perspective that it lacks all melanin” in its plumage, feet and eyes, McGraw said. Still, “we’d need feather samples for biochemical testing if we aimed to unequivocally document,” whether melanin is present, he said.

Animals can be albino but still have non-melanin pigment, he added.

McGraw added that the mutation might put the unique penguin at a disadvantage, since penguins use their coloring for choosing mates and protecting themselves from both predators and the sun.

“It’s conceivable that such color aberrations could impact both survival and reproduction,” McGraw said.

For whatever the reason, the white-and-yellow coloring is rare enough that it has never been seen before, as far as experts are aware. A white chinstrap penguin was spotted in Antarctica in 2012, The Independent reported.

The rarity made Adams feel especially lucky to get a chance to photograph this individual. He said that it was one of at least 120,000 penguins in the colony.

“It was heaven that he landed by us. If it had been 50 metres away, we wouldn’t have been able to get this show of a lifetime,” Adams told The Independent.