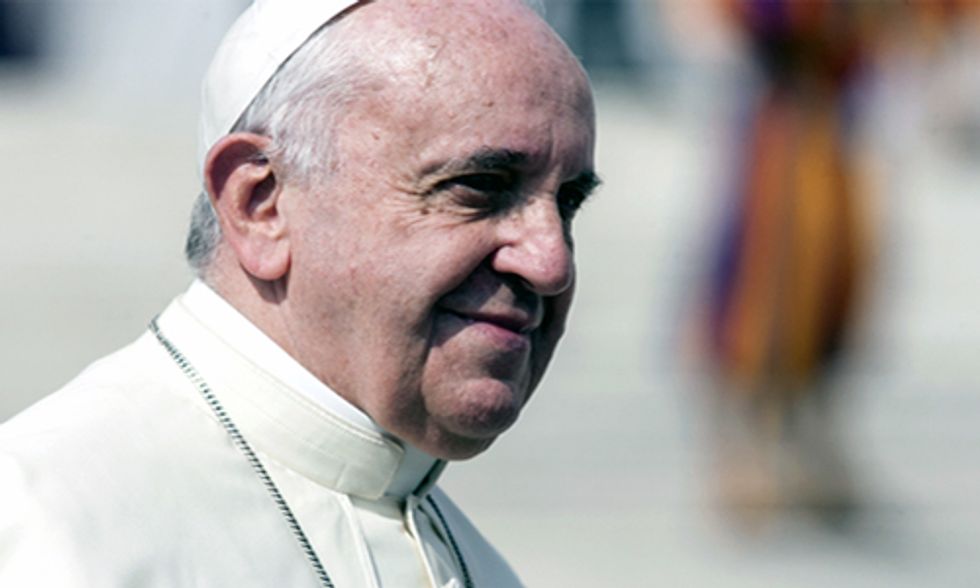 In what has become an annual tradition, Pope Francis wrote a letter to Tony Abbott, the Prime Minister of Australia and this year's leader of the G20 Summit, which will take place Nov. 15-16 in Brisbane, Australia. On the heels of a report by the Overseas Development Institute and Oil Change International, which is the first detailed breakdown of fossil fuel exploration subsidies by all G20 countries, the Pope has voiced his concerns about the state of world affairs:

"There are constant assaults on the natural environment, the result of unbridled consumerism, and this will have serious consequences for the world economy."
Photo credit: Shutterstock

To the Honourable Tony Abbott

On 15 and 16 November next in Brisbane you will chair the Summit of Heads of State and Government of the world’s twenty largest economies, thus bringing to a close Australia’s presidency of the Group over the past year.  This presidency has proved to be an excellent opportunity for everyone to appreciate Oceania’s significant contributions to the management of world affairs and its efforts to promote the constructive integration of all countries.

The G20 agenda in Brisbane is highly focused on efforts to relaunch a sustained and sustainable growth of the world economy, thereby banishing the spectre of global recession. One crucial point that has emerged from the preparatory work is the fundamental imperative of creating dignified and stable employment for all. This will call for improvement in the quality of public spending and investment, the promotion of private investment, a fair and adequate system of taxation, concerted efforts to combat tax evasion and a regulation of the financial sector which ensures honesty, security and transparency.

I would ask the G20 Heads of State and Government not to forget that many lives are at stake behind these political and technical discussions, and it would indeed be regrettable if such discussions were to remain purely on the level of declarations of principle. Throughout the world, the G20 countries included, there are far too many women and men suffering from severe malnutrition, a rise in the number of the unemployed, an extremely high percentage of young people without work and an increase in social exclusion which can lead to criminal activity and even the recruitment of terrorists. In addition, there are constant assaults on the natural environment, the result of unbridled consumerism, and this will have serious consequences for the world economy.

It is my hope that a substantial and productive consensus can be achieved regarding the agenda items. I likewise hope that the assessment of the results of this consensus will not be restricted to global indices but will take into account as well real improvements in the living conditions of poorer families and the reduction of all forms of unacceptable inequality. I express these hopes in light of the post-2015 Development Agenda to be approved by the current session of the United Nations Assembly, which ought to include the vital issues of decent work for all and climate change.

The G20 Summits, which began with the financial crisis of 2008, have taken place against the terrible backdrop of military conflicts, and this has resulted in disagreements between the Group’s members.  It is a reason for gratitude that those disagreements have not prevented genuine dialogue within the G20, with regard both to the specific agenda items and to global security and peace. But more is required. The whole world expects from the G20 an ever broader agreement which can lead, through the United Nations legal system, to a definitive halt to the unjust aggression directed at different religious and ethnic groups, including minorities, in the Middle East. It should also lead to eliminating the root causes of terrorism, which has reached proportions hitherto unimaginable; these include poverty, underdevelopment and exclusion. It has become more and more evident that the solution to this grave problem cannot be a purely military one, but must also focus on those who in one way or another encourage terrorist groups through political support, the illegal oil trade or the provision of arms and technology. There is also a need for education and a heightened awareness that religion may not be exploited as a means of justifying violence.

These conflicts leave deep scars and result in unbearable humanitarian situations around the world. I take this opportunity to ask the G20 Member States to be examples of generosity and solidarity in meeting the many needs of the victims of these conflicts, and especially of refugees.

The situation in the Middle East has revived debate about the responsibility of the international community to protect individuals and peoples from extreme attacks on human rights and a total disregard for humanitarian law. The international community, and in particular the G20 Member States, should also give thought to the need to protect citizens of all countries from forms of aggression that are less evident but equally real and serious. I am referring specifically to abuses in the financial system such as those transactions that led to the 2008 crisis, and more generally, to speculation lacking political or juridical constraints and the mentality that maximization of profits is the final criterion of all economic activity. A mindset in which individuals are ultimately discarded will never achieve peace or justice.  Responsibility for the poor and the marginalized must therefore be an essential element of any political decision, whether on the national or the international level.

With this Letter I express my appreciation for your work, Prime Minister, and I offer my prayerful encouragement for the deliberations and outcome of the Summit. I invoke divine blessings on all taking part and on all the citizens of the G20 countries. In a particular way, I offer you my prayerful best wishes for the successful conclusion of Australia’s presidency and I willingly assure you of my highest consideration.