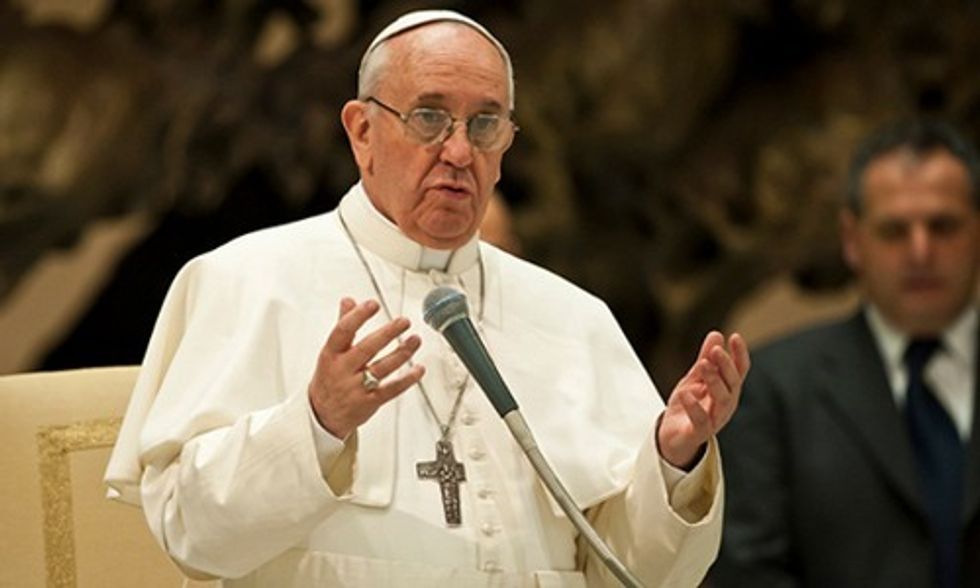 Excitement and speculation have been building for months around Pope Francis' encyclical on climate change, which is due to be released on Thursday following a noon press conference. Now a leaked draft of the document, published Monday in Italian Magazine L'Espresso, has given Vatican watchers and environmentalists something to sink their teeth into, although the Vatican cautioned that this was not the final version, which could be similar or substantially different, and had asked that details of the draft not be published.

The contents of the leaked document, said to be called "Laudato Si (Be Praised), On the Care of Our Common Home," won't surprise anyone who has been following the stream of statements the Pope has been making on the environment. But by putting it in the form of an encyclical, the Pope gives official weight to the opinions he's been expressing in many contexts.

The document addresses the role of fossil fuels on climate change and its outsized impact on poor nations, chastising wealthy countries for their disposable lifestyle. He calls for reducing carbon emissions by developing policies that hasten the switch to clean, renewable sources of energy to stave off the "unprecedented destruction of the ecosystem."

"Humanity is called to take note of the need for changes in lifestyle and changes in methods of production and consumption to combat this warming, or at least the human causes that produce and accentuate it,” he wrote, according to a report by The Guardian. “Numerous scientific studies indicate that the greater part of the global warming in recent decades is due to the great concentration of greenhouse gases … given off above all because of human activity.”

The Pope does not enumerate or analyze the scientific basis of the climate crisis in detail but rather reflects on the moral aspects of humanity's care for the Earth.

The Earth, he says, "is protesting for the wrong that we are doing to her, because of the irresponsible use and abuse of the goods that God has placed on her. We have grown up thinking that we were her owners and dominators, authorized to loot her. The violence that exists in the human heart, wounded by sin, is also manifest in the symptoms of illness that we see in the Earth, the water, the air and in living things.”

The Pope's encyclical should further enrage climate deniers, if the leaked draft is any indication. In it he appears to be calling them out directly, saying "The attitudes that stand in the way of a solution, even among believers, range from negation of the problem, to indifference, to convenient resignation or blind faith in technical solutions." He praises the environmental movement saying it has "already travelled a long, rich road and has given rise to numerous groups of ordinary people that have inspired reflection.”

His continuing strong stance on climate change has already aggravated conservatives who were delighted when the previous Popes engaged in the political battles over abortion and gay marriage but are now saying the Pope should stay out of the debate over climate change. Their criticism has been growing in the weeks leading up to the encyclical, with presidential candidate Rick Santorum and Oklahoma Senator James Inhofe both recently saying they felt the Pope should stay silent on the matter.

"The Pope ought to stay with his job, and we’ll stay with ours," said Inhofe at a climate denier conference in Washington D.C. last week.

The Pope also calls for a new global organization to tackle the reduction of greenhouse gas emissions and the development of the planet's poorer regions, another item that should raise the hackles of conservatives who promote a suspicion of international organizations like the UN.

Pope Francis has made no secret of the fact that he hopes to exert some moral authority on the UN Climate Summit in Paris in December, adding his strong voice to the discussion and helping to steer it to take strong action as the leader of 1.2 billion Catholics worldwide. Scientists recently speculated that his encyclical "is probably going to have a bigger impact than the Paris negotiations.” He hosted a one-day summit at the Vatican in April, which brought together leading climate scientists and featured an opening address by UN Secretary General Ban Ki-moon.

Pope Francis: 'If We Destroy Creation, Creation Will Destroy Us'