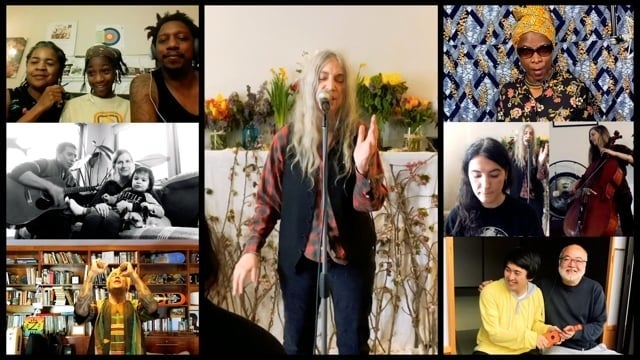 Climate-action nonprofit Pathway to Paris first launched in 2014 with an “intimate evening” of music and conversation after the People’s Climate March in New York City.

Six years later, and intimate musical evenings feel like relics from another era. But the group is still bringing artists and activists together to achieve its goal of making the Paris climate agreement a reality. To that end, the group dropped a new music video Tuesday to remind people the world over that they have the power to act on the climate crisis.

The eight-minute video features musicians and activists from 24 countries, 38 cities and six continents singing “People Have the Power” by Pathway to Paris supporter Patti Smith and the late Fred Sonic Smith. It was released in conjunction with Climate Week NYC and in celebration of Pathway to Paris’ sixth anniversary. While the group cut its teeth on live concerts, such as a two-night affair in Paris that coincided with the signing of the groundbreaking 2015 agreement, the organization’s founders say its work is more urgent than ever now that large public gatherings are not safe.

“The current pandemic surrounding Covid-19 has shown moments and threads of hope and optimism, but it also has shown just how fractured the communication of our planet remains,” Pathway to Paris co-founder Jesse Paris Smith said in a press release for the new video. “This same frustration has been experienced for decades with the climate crisis and just about any unifying global issue of great urgency. We struggle to adapt and survive based on the information we are given and the immense lack of alignment in our decision making. There couldn’t be a more urgent time for the country and the planet to unify as one collective force, and yet we see more examples of the failure of this concept to take hold. Our current reality is one of immense suffering and a promise of continued disaster if we do not get together on our agreements, set more ambitious goals, and make drastic plans for change today.”

To further this goal, Smith and fellow co-founder Rebecca Foon launched the video with the hope of encouraging people to make change by voting. They encourage U.S. viewers to vote in the upcoming November election and viewers the world over to vote wherever and whenever local elections occur. They also suggest people use their voice by signing petitions, contacting representatives, writing letters and having conversations about climate change with friends and family.

Joining Foon and Smith in the video to endorse this message are a wide range of celebrities, activists and ordinary people including Patti Smith, Joan Baez, Tony Hawk, Cyndi Lauper, Dr. Vandana Shiva and Bill McKibben.

“We are in a time where our interconnectedness has never been more pronounced. This time presents an opportunity for us as a planet to truly see how our epic challenges are deeply connected, and our collective solutions need to address these challenges holistically. Due to the state of emergency we find ourselves in globally (current science highlights that we might hit 1.5 degrees as soon as 2024), we need to put our resources and attention as quickly as possibly in designing and creating a world that is no longer dependent on the use of fossil fuels while building a green economy that is rooted in equity, justice, human rights and ethics if we want a future for ourselves and our children,” Foon said in the press release.

Foon and Smith, both musicians themselves, noted that the pandemic has taken a toll on an industry that relies on live performances. The group has already organized two virtual festivals since quarantine measures began, one for Earth Day in April and one for World Environment Day in June.

“It is a bit terrifying to imagine the impact that the disappearance of culture and community will have on the upcoming election, though we must continue to find ways to connect and collaborate in the virtual plane, while following quarantine and social distancing guidelines,” Smith said in the press release.