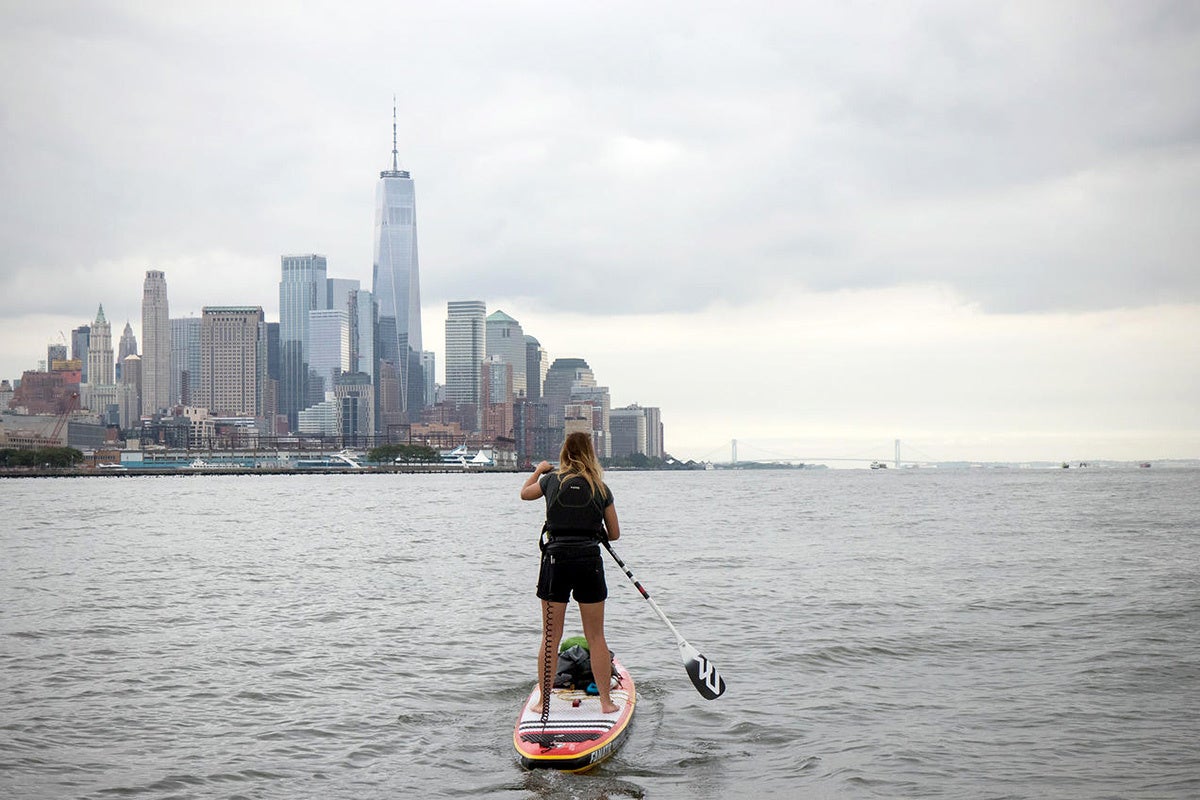 Lizzie Carr traveling down the Hudson River on her stand-up paddleboard. Max Guliani / The Hudson Project

Lizzie Carr was navigating a stretch of the Hudson River north of Yonkers, New York, recently when she spotted it—a hunk of plastic so large and out of place that she was momentarily at a loss to describe it.

The sloping side helped her put her finger on it: It was an outdoor playset, with a big slide attached. “Pink and yellow and blue, and just caught up on a rocky shoreline,” she recalls. “Trapped, basically.”

As to how a piece of backyard debris may have ended up on the bank of one of the nation’s busiest and most scenic waterways, Carr could only wonder. “You’re thinking, how on earth did this get here? It came from somewhere, but I have absolutely no idea where.”

In fact, few people probably have more firsthand knowledge of the plastic pollution that clogs our waterways than Carr does. Days earlier, the Surrey, England–born athlete and activist had begun the latest in a series of long-distance endurance challenges undertaken on a stand-up paddleboard to bring attention to the contamination of rivers and streams. In 2016, she traveled the length of England on inland rivers and canals—a distance of 400 miles that she covered in 22 days. In May 2017, she made history by becoming the first woman to paddleboard solo across the English Channel.

For her most recent eco-adventure, Carr ventured to Albany, New York, where she set off at dawn on September 6 to travel 170 miles of the Hudson River in the company of her trusty 13-foot inflatable paddleboard. From the state capital—a lingering hot spot for toxic PCB contamination—she paddled south to the foot of the Statue of Liberty, where the tidal flow of the river meets the Atlantic Ocean in New York Harbor. Her goal: to highlight the fact that 80 percent of debris that ends up in the oceans originates on land, finding its way to our seas through inland waterways such as the streams and tributaries that feed into the Hudson.

Though our plastic addiction fueling this environmental crisis is becoming increasingly well known, Carr notes that coming to terms with the scope of the pollution can feel overwhelming. And rather than bombarding people with stats and figures around the issue, which are “almost incomprehensible,” she says, “we need to break that down and make it accessible to people in a way that makes them feel they can contribute by cleaning up their local waterways and reducing consumption of single-use plastics.”

With that mission in mind, Carr organizes trash cleanups and paddleboarding demonstrations once or twice a month during the summer, as she did for dozens of volunteers during her Hudson challenge. Throughout these endeavors, she leads by example. Out on the water, she carries a handheld garbage picker, and she has plucked thousands of pieces of plastic from the surface—beverage bottles, Styrofoam food containers, balloons, balls, and countless disposable shopping bags.

On shore, she instructs volunteers who attend her cleanup events on how these consumer goods break down over time into microplastics that kill marine animals and birds when they are ingested in place of food. Larger pieces of plastic ensnare sea turtles and strangle seabirds.

Despite the serious nature of the work, Carr thrives on being out on her board and inspiring others to join her—both in sport and in mission. “Lizzie has created an accessible way for people to get involved in protecting waterways,” says Jen Benson, outreach director of Riverkeeper, a Hudson River advocacy group that worked with Carr to set up a pair of cleanup events in Poughkeepsie and Croton-on-Hudson. “She comes at it from a fun, alternative angle by saying, ‘Come out and try paddleboarding’ and at the same time, as Lizzie puts it, ‘You have to pay your nature tax.'” 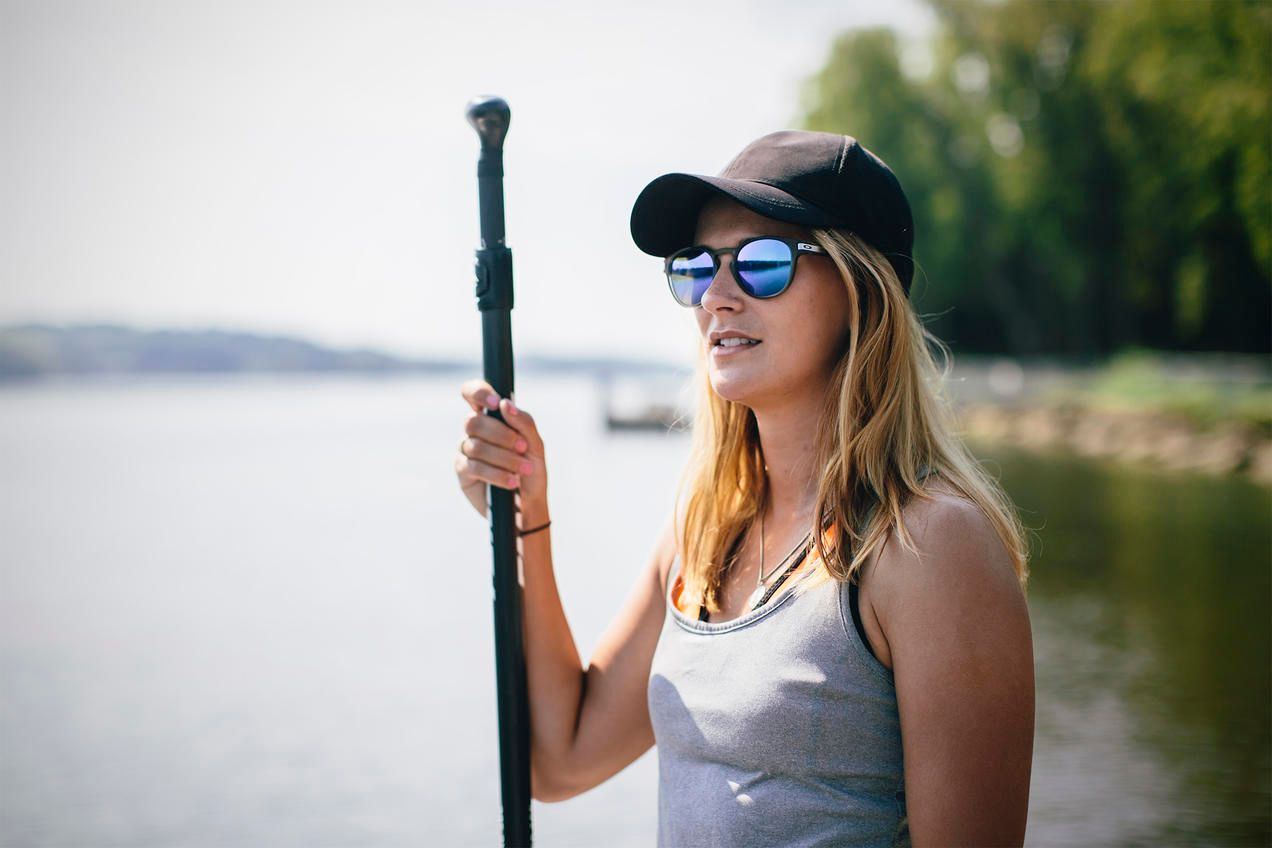 Carr on her Hudson River voyage.Joel Caldwell / The Hudson Project

A lifelong athlete, Carr more or less stumbled upon the sport of paddleboarding four years ago at a very different time in her life. In 2014, she was diagnosed with thyroid cancer and underwent treatment involving surgery and radiation therapy. Fortunately, the treatment worked, and with her cancer in remission, Carr left London and her corporate job as a project manager at a creative agency to recuperate at her father’s house in the Isles of Scilly off England’s southwest coast.

There, she saw people paddleboarding and decided to give it a try. “It was a great low-impact way for me to recover my fitness, and almost like meditation—very calming, which I really needed at the time.” She was smitten.

Back in London, however, Carr’s new sporting passion brought her face-to-face with another ugly reality. “It was only when I started paddleboarding on the canals where I live that I started to understand the scale of the problem with plastic pollution,” she says. Everywhere she looked there were bags, bottles, and wrappers of one kind or another—goods used once by consumers, then discarded without a thought.

“I guess I was in a bit of an environmental stupor, but that was a wake-up call,” Carr says. Compelled to draw attention to the issue, Carr soon gave up her job and in 2016 launched the #PlasticPatrol initiative, which encourages people to pick up plastics from waterways, photograph them, and plot the geotagged examples on the organization’s interactive map. 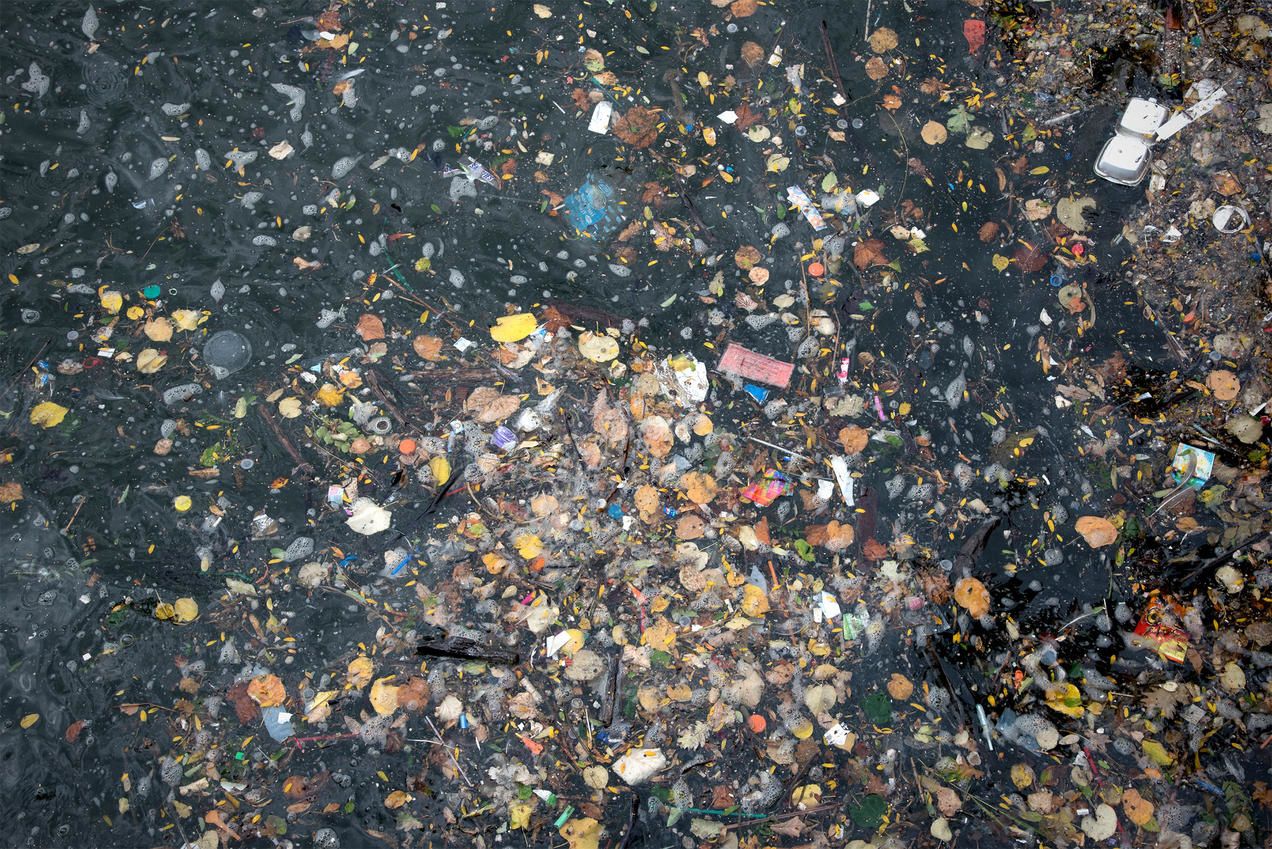 To date, people have registered more than 50,000 verified instances of plastic pollution in waterways via the #PlasticPatrol app, thanks to the publicity generated by Carr’s paddleboarding challenges and her other activism. The result is a devastating global portrait of the extent of marine plastic pollution, with pictures of floating debris, abandoned fishing nets, and entangled wildlife in Northern Ireland, the Canary Islands, Cambodia, and 15 other countries.

“It affects marine life in so many different ways,” says Carr. “I often hear people during our beach-cleans say, ‘I can’t tell whether this is a bit of plastic or a shell’—to which I say, ‘If you can’t tell, imagine how a marine animal feels.'” (One study found microplastics in the guts of 36 percent of 10 species of fish pulled from the English Channel.) “Because of the fish eating plastics, and because we’re eating the fish,” Carr adds, “it’s also starting to become part of the human food chain. It’s scary when you think about it, and it all just starts from what we’re buying from the shops every day, from what our manufacturers are producing every day.”

As Carr campaigns for new laws to curb the production of plastics and urges people to make simple behavior changes, like using canvas shopping bags and giving up disposable plastic straws, she has witnessed a gradual shift in consumer culture in the United Kingdom, she says. “We’ve had legislation that has banned microbeads in our products and put a five-pence tax on plastic bags, and we’re looking at other ways to reduce plastics. There’s been a tipping point.” She’s cautiously optimistic that if more consumers become involved in the effort, then corporations will feel the need to get on board, for example by making changes to their packaging and shipping practices, which could have wide-reaching effects.

In the meantime, Carr is focused on delivering her message as far and wide as she can—which is one reason she decided to bring #PlasticPatrol to New York this past summer. Along her Hudson River voyage, the challenges she encountered weren’t strictly garbage-related. Beyond the playground equipment in the water, she also steered clear of huge cargo vessels and dodged smaller pleasure craft and fish that leaped out of the water as if to greet her. Strong winds and currents slowed her progress, and thunderstorms arrived seemingly out of nowhere, sending her hurrying to the shore for safety.

Tracking her progress via GPS map was volunteer Jana Johnston, from Vienna, Virginia. Johnston had read about Carr in an in-flight magazine on her way home from California last year and reached out to offer her support. In September she traveled to New York City to enlist the help of local environmental groups, scout accommodations for Carr and her support crew, help publicize her journey, and cheer her on along the final stretch.

As Carr quickly fell behind schedule because of bad weather, Johnston began to fear that all the hard work they had put into the Hudson challenge might have been in vain. “Two days into this, I was thinking, I don’t think she’s going to be able to do it. Why were we thinking she could? But then, all of a sudden, Lizzie did 19 miles the next day. I knew she had it licked.”

When the two finally met in person at Manhattan’s Pier 26 on September 14, closing Carr’s eight-day journey, the paddleboarder-activist cried tears of joy and relief, recalls Johnston. And then she pondered where her next challenge might take her.