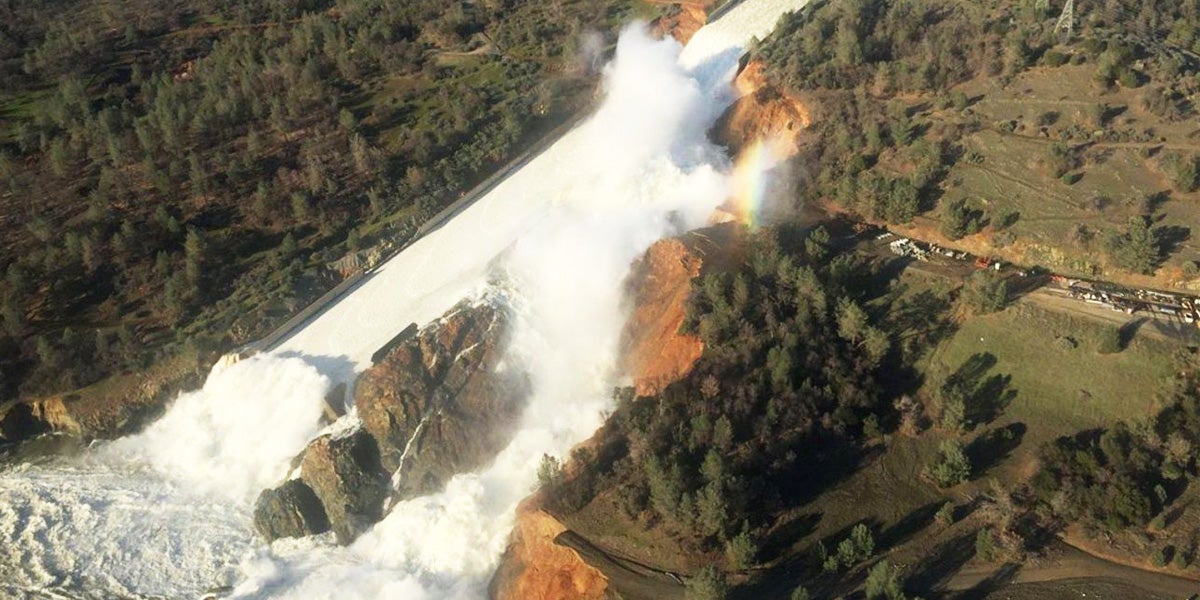 The utterly avoidable, terrifying and still potentially catastrophic failures of the spillways of North America’s highest dam—California’s 170 foot, earth-filled Oroville—could, with the right national leadership, awaken America to the urgency of investing in our physical safety and future—our infrastructure.

Sixty years old, Oroville single handedly provides one-third of the water for all of Southern California. It is on the verge of failure, because an under designed emergency spillway began to erode away the face of the dam when used for the first time. Three counties and 220,00 people have been evacuated; much of California’s agriculture faces parched fields after one of the heaviest rainfall years on record. The state’s water establishment refused to armor the emergency channel with concrete because “it was too expensive”—perhaps $10-20 million. They justified their recklessness by assuming that if the emergency spillway was needed, the emergency in question would be mild, timid and well-behaved. The main function of the dirt spillway was to provide a false sense of security to the public. No one knew if it would really work or much cared. Experts blithely asserted it would never be needed. Now we know. It was and it doesn’t.

America’s bridges, dams, highways, mass transit systems, drinking water supplies, sewers, levees, ports and other vital public support systems face similar challenges and pose similar risks. Of 84,000 major dams in the U.S., 14,000 are rated as being “high-hazard” if they fail. The foundations of our economy and our communities are eroding beneath us just like the muddy face of the Oroville Dam.

The agencies and regulators charged with ensuring that our physical infrastructure works often shill for shoddiness and short-cuts. Often maligned environmental “obstructionists” are the frequently outshouted defenders of doing it right.

Oroville Dam was only approved by the voters of California after a devastating Feather River flood swept through Oroville in 1955; it was sold as a public safety measure. The real driver was the desire of development interests in arid Southern California to tap the rivers of the wetter north. Even presented as flood protection, the dam barely received voter approval. To keep costs down, the emergency spillway, designed to handle overflow waters from the severe rainfall events, wasn’t clad in concrete, except at the very lip. It was known and accepted, that surging waters over-topping the spillway would rapidly erode the earthen dam below that lip. In bureaucratese, the safety rules conceded that the spillway would fail if used: “The guidelines specify that during a rare flood event, it is acceptable for the emergency spillway to sustain significant damage.”

In 2005, Oroville came up for safety review by the Federal government. The Sierra Club, which I then headed, joined Friends of the River in urging that the emergency spillway be clad in concrete. The groups argued, using common sense, that “in the event of extreme rain and flooding, fast-rising water would overwhelm the main concrete spillway, then flow down the emergency spillway and that could cause heavy erosion that would create flooding for communities downstream, but also could cause a failure, known as ‘loss of crest control.'”

The very water agencies whose constituents—farmers, businesses and families—depended on reliable delivery of water from Oroville, lobbied strongly against having to provide the “tens of millions” of dollars that strengthening the spillway would have required. They pinched pennies even though they knew that the dam was highly vulnerable. (On Christmas, 1964, while the dam was under construction, it had been almost over-topped by a series of heavy rainfalls—the Feather River had given fair warning of its capriciousness and power).

Regulators, imbued with the George W. Bush administration’s hostility to a federal role in public safety, were not impressed. (Remember Katrina. The fuse on Oroville was just longer). They rejected the environmental petition. The “emergency” spillway remained unsheathed, a soft-underbelly at the Earth-filled core of the heart of the nation’s tallest dam.

Now the Feather has shown its strength again. The scariest thing is that once the main spillway failed the emergency spillway began eating out the dam while it was carrying less than 5 percent of its 350,000 cubic feet per second design rating. This strongly suggests that many, perhaps most, of America’s dams, are reliant on engineering assumptions which will not withstand the test of extreme weather unleashed by climate change.

What’s next? Water managers will continue dumping as much water—only a few months ago, as precious as gold, still likely to be needed next summer—as they can, through the damaged but partially functional main spillway. Their goal is to drain Oroville sufficiently that the heavy rains expected in a few days and later in the season will not again reach the emergency spillway and risk spillway failure and a virtually instantaneous release of 10 billion gallons, the top 30 feet of stored water behind the dam.

Now that water levels are down, authorities have allowed normal life to resume in ghost towns like Oroville, Yuba City and Marysville, the very communities whose security was the public justification for building the dam in the first place. Water managers will still need to keep the dam far below its normal storage level until the water season ends, because they cannot use the main spillway at its full design capacity, until it is repaired. This means that next summer farmers and cities will fall far short of the water Oroville could have delivered if operated normally. A loss of a full third of the region’s water supply is a frightening possibility if repairs of Oroville require shutting it down this summer.

18 Reasons Why We Must Invest in America's Infrastructure https://t.co/nObNJWYaDP @Greenpeace @greenpeaceusa

Will the lessons of this 60-year folly be learned? California might realize that it needs to invest in water delivery and flood control systems better prepared for the extreme weather and diminished snow pack to come. Or this disaster could be used to argue for ever more elaborate, fragile and vulnerable water diversion projects like the proposed tunnels in the Delta, larded up with fatter public subsidies to the very water users who refused to properly repair Oroville’s spillways in 2005.

President Trump‘s campaign promises suggest that he should use Oroville to light a fire under Mitch McConnell and Paul Ryan, who breezily dismiss every warning from the nation’s civil engineers as a call for “a trillion dollar stimulus project.” The White House did cite the emergency as evidence of the need for a major investment in infrastructure, saying, “The situation is a textbook example of why we need to pursue a major infrastructure package in Congress.”

But Trump’s recent behavior suggests that he’s not willing to do the heavy lifting of moving the Tea Party wing of the Republican party out of his way. It’s going to take the rest of us—businesses and mayors, governors and community leaders, to fire up the Democrats in—and the president—to commit that by the end of the next eight years, America’s dams—and the rest of its infrastructure—are fit for service in the 21st century.