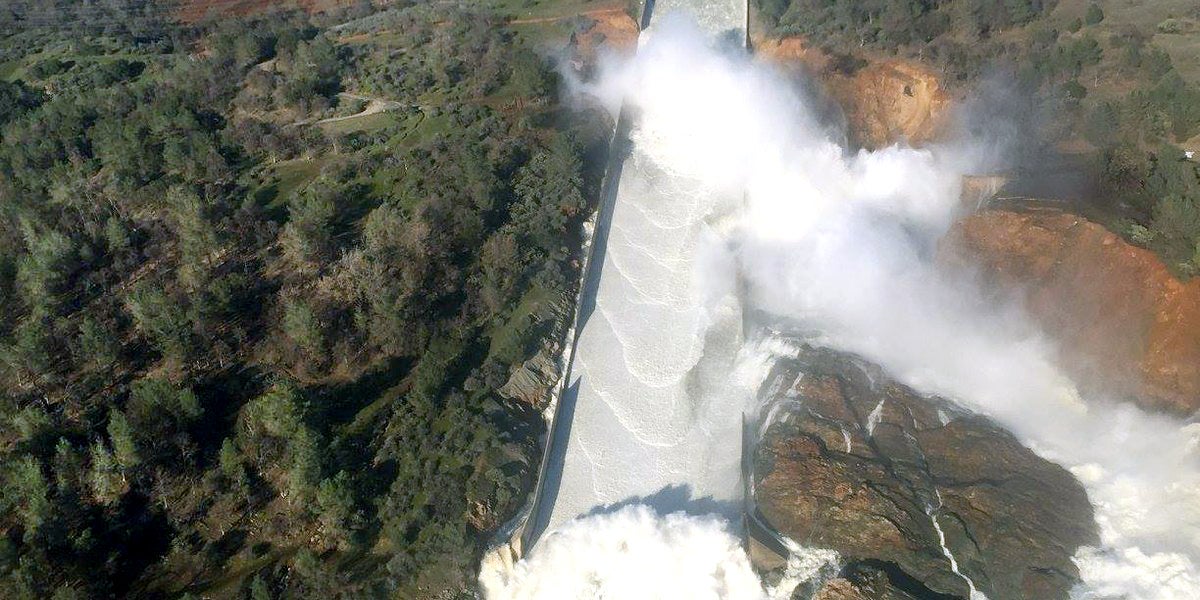 As nearly 200,000 Northern California residents flee to higher ground over the threat of the Oroville
Dam emergency spillway’s failure Sunday night, a report has emerged that state and federal officials were warned 12 years ago that the earthen structure was already at risk of erosion.

The Mercury News reported that back in Oct. 2005, Friends of the River, the Sierra Club and the South Yuba Citizens League filed a motion with the Federal Energy Regulatory Commission (FERC) during the Oroville Dam’s relicensing process.

The environmental groups said that the dam, which California built and completed in 1968, did not meet modern safety standards and urged FERC to secure the dam’s emergency spillway with concrete rather than have it remain as an earthen hillside.

Should extreme rain and flooding occur, the groups warned that the excess water could overwhelm the main concrete spillway and flow into the auxiliary spillway. Too much water could cause heavy erosion and potentially unleash flooding and threaten nearby communities.

“A loss of crest control could not only cause additional damage to project lands and facilities but also cause damages and threaten lives in the protected floodplain downstream,” the groups wrote.

However, FERC rejected the groups’ request. Furthermore, California’s Department of Water Resources and other water agencies that would have paid for the upgrades said the fix was unnecessary.

“It is important to recognize that during a rare event with the emergency spillway flowing at its design capacity, spillway operations would not affect reservoir control or endanger the dam,” wrote John Onderdonk, a FERC senior civil engineer in a July 27, 2006 memo to his managers.

KQED describes the emergency spillway as “essentially an ungated 1,700-foot-wide notch in the rim of the reservoir … Below an initial concrete lip, water courses over bare earth all the way to the Feather River below, scouring the incline of earth, rocks and trees.”

The secondary spillway has not been needed for use in its 48-year history—until this weekend.

Although the recent rainfall has brought much-needed relief to California’s six years of epic drought, the nation’s tallest dam is now nearly full. Water levels at the 770-foot-tall structure were less than seven feet from the top on Friday.

While the Oroville Dam is not currently compromised, both its primary spillway and the emergency spillway have problems due to severe erosion, authorities warned.

The primary spillway has a growing hole that is 250 feet long, 170 feet wide and about 40 to 50 feet deep, according to Bill Croyle, acting director of the Department of Water Resources. Because of the main spillway’s damage, water has been pouring into the emergency spillway.

Fortunately, water has stopped pouring over the dam’s emergency spillway since Sunday night.

“Oroville lake levels have receded to the point that auxiliary spillway flows have stopped. DWR hopes to push over a million acre feet of water over the main spillway in the next week, clearing the way for much needed flood storage in the lake,” California’s Department of Water Resources said.

Still, officials are planning for the worst as the situation could yet become dangerous.

A collapse of the secondary spillway could cause a “30-foot wall of water” coming out of Lake Oroville, Cal-Fire incident commander Kevin Lawson said at a Sunday night press conference.

Evacuation orders are unchanged as of Monday morning.

“Once you have damage to a structure like that it’s catastrophic,” Croyle said. However, he stressed that “the integrity of the dam is not impacted” by the damaged spillway.

California Gov. Jerry Brown has issued an emergency order in response to the situation.