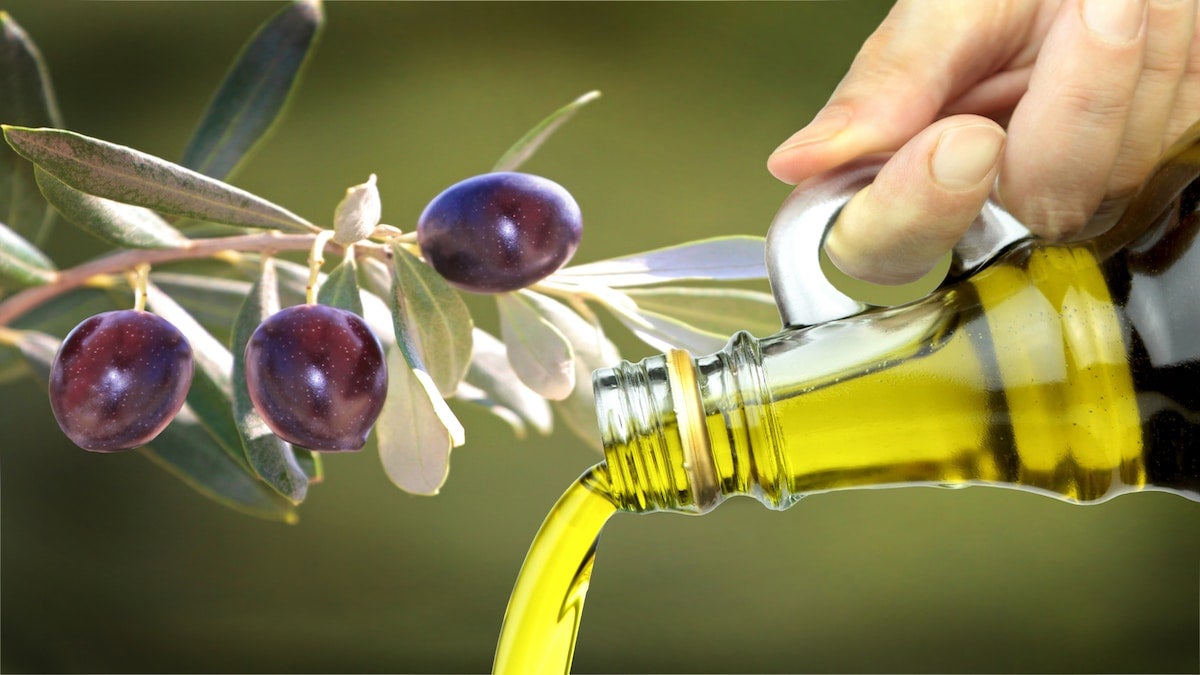 Cold pressed olive oil is one of the best types of olive oil that you can cook with or add directly to food. hayatikayhan / iStock / Getty Images Plus

Olive oil has been used for centuries as both a food and medicine, originating from the Mediterranean region. Many types of olive oil differ in quality depending on how the oil is extracted, and this influences the quality of the final product. Cold pressed olive oil is one of the best types of olive oil that you can cook with or add directly to food.

The United States Department of Agriculture (USDA) recommends that adults limit their calories from fat to 30%, with a focus on unsaturated fat.

The oleic acid inside olive oil is a healthy, unsaturated fat that has a beneficial modulatory effect on autoimmune diseases, inflammatory diseases and cancer, as well as facilitating wound healing. These were the results uncovered from a 2013 review published in Mini-Reviews in Medicinal Chemistry.

Supplementing with olive oil may lower LDL cholesterol due to its healthy fat content, according to an older study published in Medical Science Monitor.

2. Olive Oil Is High in Antioxidants

Since cold pressed olive oil isn’t treated with heat, it’s more likely to retain a higher portion of its antioxidant content. Antioxidants prevent oxidative stress by fighting free radicals, and oxidative stress is one of the major causes of inflammatory diseases like cardiovascular disease.

Hydroxytyrosol, tyrosol, oleuropein and oleocanthal are the phenolic compounds that are mainly responsible for antioxidant activity inside olive oil, according to peer-reviewed research published in IntechOpen’s Functional Foods in 2018.

The research published by IntechOpen also states that olive oil contains anti-inflammatory properties. Olive oil contains a compound called oleocanthal, which is a natural anti-inflammatory agent. In conjunction with its antioxidant properties and healthy fats, dietary supplementation with olive oil is a natural way to help reduce inflammation. It could reduce the risk of certain chronic conditions linked with inflammation like cardiovascular disease, diabetes, cancer and arthritis.

As demonstrated, previous studies have shown that olive oil contains important compounds that help fight inflammation and reduce LDL cholesterol. Another 2015 study in 84,000 women discovered a 15% risk reduction of heart disease just by substituting 5% of saturated fats for foods high in monounsaturated fats, including olive oil. The study was published in the Journal of the American College of Cardiology.

Many people rely on the Mediterranean diet, which relies on olive oil as a healthy fat source, to mitigate heart health risk factors.

Supplementing with cold pressed olive oil could support brain health. A specific diet that focuses on the use of olive oil and is backed by scientific research is called the MIND (Mediterranean-DASH Intervention for Neurodegenerative Delay) diet. Imagine a fusion of the traditional Mediterranean diet with the Dietary Approaches to Stop Hypertension (DASH) diet, recommended by the National Heart, Lung, and Blood Institute.

Participants following the MIND diet have shown reduced rates of declines in mental sharpness and memory with age in population studies. The finding has also extended to declines following a stroke. For example, a 4.5-year study in 923 participants revealed a 53% rate reduction of Alzheimer’s disease in individuals who stuck to the diet. The results of the 2015 study were published in Alzheimer’s & Dementia.

Including Cold Pressed Olive Oil in Your Diet

Cold pressed olive oil can be used as cooking oil for baking, roasting and sautéing. Its versatility also makes it an ideal ingredient for marinades, sauces and salad dressings.

The most direct way to include cold pressed olive oil in your diet is by substituting it for saturated fats. Try these food swaps:

Keep in mind that olive oil is dense in calories. Watch your caloric intake closely, so you don’t exceed the 30% limit recommended by the USDA.