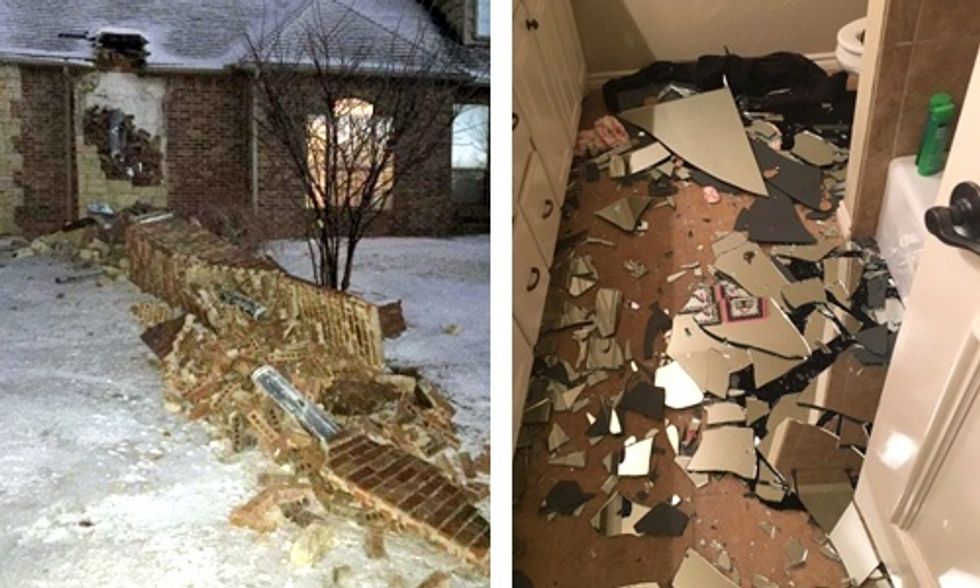 Oklahoma has seen a dramatic uptick in earthquakes in recent years, and some residents refuse to sit idly by. On Monday, 14 residents of Edmond, Oklahoma filed a lawsuit against 12 energy companies, claiming their fracking operations contributed to a string of earthquakes that hit central Oklahoma in recent weeks.

In the lawsuit, the residents focus on two earthquakes of magnitude 4.3 and 4.2, which struck Edmond on Dec. 29, 2015 and Jan. 1, respectively. Citing "reckless disregard for the consequences to others," the plaintiffs argue in the lawsuit that the companies "injected large volumes of drilling waste in disposal wells located near the cities of Edmond and Oklahoma City, in the vicinity of the plaintiffs' properties, under conditions that defendants knew or should have known would result in an increased likelihood that earthquakes or other adverse environmental impacts would occur, thereby unreasonably endangering the health, safety and welfare of persons and property, including plaintiffs and others.

"The use of disposal wells by defendants created conditions which, among other things, are the proximate cause of unnatural and unprecedented earthquakes that continue unabated, increasing in both frequency and magnitude within Oklahoma County and elsewhere in the state of Oklahoma, which have damaged plaintiffs and others and threaten to do so in the future."

The residents have suffered and will continue to suffer "severe and permanent damage to their persons and property,” according to the lawsuit. This damage includes “cracked and broken interior and exterior walls” and “movement of the foundations beneath their dwellings.” The residents also cited “mental and emotional anguish, fear and worry” as a result of the earthquakes.

The plaintiffs are seeking a permanent injunction to stop the use of 16 disposal wells operated by the energy companies. "Mother Earth has spoken, and Oklahoma is in a dangerous, dangerous position," attorney Garvin Isaacs, who represents the Edmond-area homeowners along with David Poarch, told The Oklahoman. "We must address this."

Oklahoma went from two earthquakes a year before 2009 to two a day. The state now has more earthquakes than anywhere else in the world. Just in the past two weeks, Oklahoma experienced at least 82 earthquakes.

The Oklahoma Geological Survey concluded in April 2015 that the injection of wastewater byproducts into deep underground disposal wells from fracking operations has triggered the seismic activity in the state.

Even pro-business Oklahoma Gov. Mary Fallin has admitted that there's a “direct correlation between the increase of earthquakes that we’ve seen in Oklahoma [and] disposal wells.” However, Fallin has maintained a nuanced stance on fracking, as Oklahoma is one of the top natural gas-producing states in the country, and the industry provides a significant number of jobs in the state.

“We want to do it wisely without harming the economic activity we certainly enjoy and the revenue, quite frankly, we certainly enjoy,” Fallin said at a water and energy event in September 2015. “The council has worked very hard to ensure the energy sector, state agencies, environmentalists and academia are all talking and sharing that data and we have a scientific-based approach to reducing seismicity in our state.”

And, to its credit, the Oklahoma Corporation Commission, which regulates the state's oil and gas industry, has taken action to grapple with the near-constant earthquakes that have been plaguing the state. It has forced changes to more than 500 disposal wells around the state, including the shutdown of wells around the city of Cushing, which holds one of the largest crude oil storage facilities in the world. But with 3,500 disposal wells in operation, these regulations only apply to a fraction of existing wells.

The milquetoast response from state regulators has led Oklahoma residents, including the plaintiffs who filed suit on Monday, to take action into their own hands. At least two lawsuits were filed, according to the Oklahoman, after the state was hit with its largest earthquake to date, a 5.6-magnitude that hit the Prague area in 2011.

One of those suits, Ladra v. New Dominion, LLC, was initially dismissed by a lower court judge, who said such disputes should be handled by the Oklahoma Corporation Commission. The plaintiff, Prague resident Sandra Ladra, appealed the decision to the Oklahoma Supreme Court, which ruled in July 2015 that the lawsuit could proceed in district court. The ruling helped clear the way for citizens to sue the oil and gas companies responsible for the wells. Ladra's case is still pending.

In October 2015, the Oklahoma Sierra Club and Washington-based Public Justice Foundation sent letters to four Oklahoma energy companies warning them of a lawsuit. Public Justice launched a petition, which has gathered more than 11,000 signatures that demands Oklahoma's oil and gas companies take "immediate steps to curb their impact on the state’s people and environment." The group told The Oklahoman on Monday that it still plans to file suit.