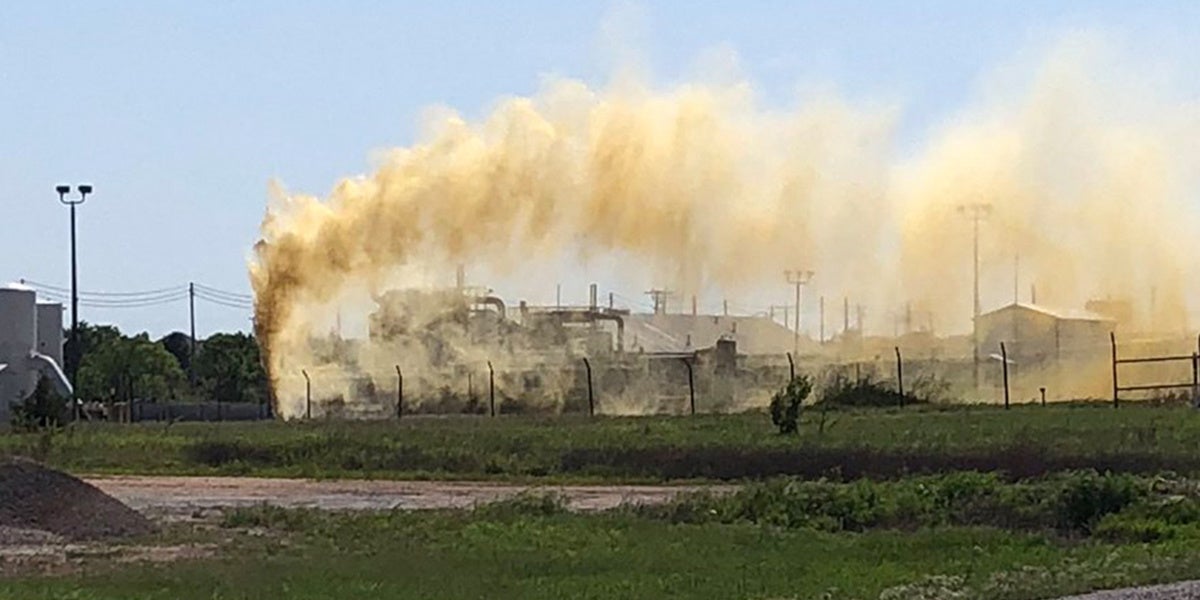 Raw crude oil spewed from a ruptured Sunoco pipeline in Oklahoma on Thursday.

The Oklahoma City Fire Department and hazmat crews responded to the situation after receiving reports of a “yellow liquid” shooting into the air near an oil and gas well site in Edmond, a suburb outside of Oklahoma City.

Officials briefly closed off a section of road on Pennsylvania Avenue and denied access to some homes in the neighborhood north of the release. The neighborhood was not evacuated.

“This is all taken care of now,” the fire department tweeted later that afternoon. Cleanup efforts are underway.

News 4 reported that the leak from Sunoco’s pipeline occurred in the area of a natural gas booster plant operated by Colorado-based DCP Midstream.

The release occurred in a well-populated area, with many houses surrounding the facility. Some residents expressed dismay after their property was coated in oil. One tweeted to DCP Midstream, “a massive leak at your facility in Edmond, OK, just coated my entire house and my neighborhood with crude. What are you going to do to clean it up?!?”

A DCP spokesperson told News 4 it has no control over the Sunoco pipeline but is assisting with cleanup.

Hey @DCPMidstreamLP, a massive leak at your facility in Edmond, OK, just coated my entire house and my neighborhood with crude. What are you going to do to clean it up?!? pic.twitter.com/MrYzT7QCYC

An Oklahoma Corporation Commission spokesman told News 4 about 5-10 barrels of crude oil was released from the pipeline. The commission has also launched an investigation into the incident.

Sunoco confirmed to the news station that it did have a release of crude.

Sunoco is a subsidiary of Energy Transfer Partners, which owns about 71,000 miles of natural gas, natural gas liquids, refined products and crude oil pipelines across the country, including the contentious Dakota Access pipeline.

“The section of the line has been isolated and the area contained,” ‎Energy Transfer spokesperson Vicki Granado told News 4. “We are in the process of bringing the appropriate resources onsite to fully remediate the area and make repairs. Once that is complete the line will be returned to service.”

In recent years, the city of Edmond and much of central Oklahoma has been rattled by a swarm of earthquakes that experts say are related to wastewater deposits from oil and gas production. In 2016, more than a dozen Edmond and Oklahoma City residents filed a lawsuit against energy companies, claiming their operations contributed to a string of earthquakes.

How will we know when/how our neighborhood (SikverHawk) will be cleaned up? We are covered, photo of my window covered in oil. pic.twitter.com/1xSyS5mDYA