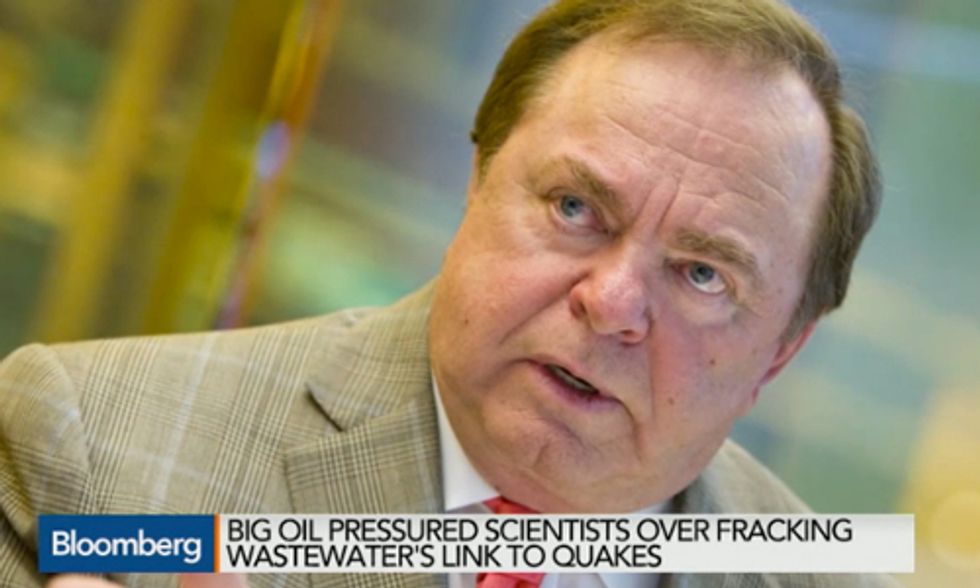 Hillary Clinton's emails aren't the only ones making news, at least not in Oklahoma. A trove of emails were released by the Oklahoma Geological Survey (OGS), which regulates the state's oil and gas industries, in response to public records requests from news outlets such as Bloomberg and EnergyWire. They appear to reveal that oil and gas billionaire Harold Hamm, known as the founding father of the U.S. fracking boom, inserted himself into the conversation about whether fracking was causing a dramatic upsurge in earthquakes in the state.

Billionaire Harold Hamm is known as the pioneer of fracking. Image credit: Bloomberg

Bloomberg reports that in November 2013, state seismologist Austin Holland, who works for the OGS, got a request from University of Oklahoma president David Boren to meet with him and Hamm in Boren's office. Boren is on the board of Hamm's company, Continental Resources.

Hamm isn't known as a guy shy about slinging around his money and his influence. He's given millions to the University of Oklahoma including $20 million for a diabetes center. He contributed almost a million dollars to Mitt Romney's 2012 presidential campaign and was named his energy advisor. And according to Holland, at that meeting with Boren, he wanted to express his "concern" about the growing evidence that the wave of earthquakes was an outcome of the fracking process.

As fracking has exploded in Oklahoma in the last five years, so have earthquakes, going from an average of two a year over 3.0 magnitude from 1975-2008 to 538 in 2014. Last year, Oklahoma surged past California as the most seismically active state in the lower 48. And scientific studies have been piling up showing a connection between earthquakes and fracking, not just in Oklahoma but also in Texas, Colorado and Ohio.

"Large areas of the U.S. that used to experience few or no earthquakes have, in recent years, experienced a remarkable increase in earthquake activity that has caused considerable public concern as well as damage to structures," says the U.S. Geological Survey (USGS). "This rise in seismic activity, especially in the central U.S., is not the result of natural processes. Deep injection of wastewater is the primary cause of the dramatic rise in detected earthquakes and the corresponding increase in seismic hazard in the central U.S."

"Holland had been studying possible links between a rise in seismic activity in Oklahoma and the rapid increase in oil and gas production, the state’s largest industry," wrote Bloomberg reporters Benjamin Elgin and Matthew Phillips. "Hamm requested that Holland be careful when publicly discussing the possible connection between oil and gas operations and a big jump in the number of earthquakes, which geological researchers were increasingly tying to the underground disposal of oil and gas wastewater, a byproduct of the fracking boom that Continental has helped pioneer."

"It was just a little bit intimidating," said Holland. When he emailed a colleague that he had been summoned to have "coffee" with Boren and Hamm, she replied, "Gosh, I guess that's better than having Kool-Aid with them. I guess."

The previous month, Holland had a meeting in the office of Patrice Douglas, then one of the three elected members of the OGS, that was attended by Jack Stark, then senior vice president for exploration at Continental and now its president. Holland updated his superiors following the meeting, saying, “The basic jist [sic] of the meeting is that Continental does not feel induced seismicity is an issue and they are nervous about any dialogue about the subject."

It appears their nervousness was making Holland and the OGS nervous as well, and that they bowed to Hamm's suggestion that they "be careful" about linking earthquakes and fracking operations. When the journal Geology published a paper attributing a 2011 5.6 magnitude Oklahoma quake in 2011 to the injection of fracking wastewater, OGS put out its own statement attributing it to “natural causes.”

And when a new disposal well was turned on in southern Oklahoma's Love County and the area began to experience multiple quakes a day, which disappeared when the well was de-activated, Holland wrote, “We cannot rule out that this observation could be simply a coincidence." After Holland stonewalled residents at a public meeting, ExxonMobil geologist Michael Sweatt emailed him, saying, “I would like to congratulate you on a job well done at the Town Hall meeting in Love County. I believe you delivered an unbiased report on the recent earthquake activity and answered the residents’ questions the best you could.”

Both Boren and Continental dismissed concerns that there was anything improper in the November 2013 meeting in Boren's office or other contacts that Continental had with the OSG.

“The insinuation that there was something untoward that occurred in those meetings is both offensive and inaccurate,” Continental Resources spokeswoman Kristin Thomas told Bloomberg. “The Oklahoma Geological Survey had a solid reputation of an agency that was accessible and of service to the community and industry in Oklahoma. We hope that the agency can continue the legacy to provide this service.”

Boren called the meeting in his office "purely informational," and said, “Mr. Hamm is a very reputable producer and wanted to know if Mr. Holland had found any information which might be helpful to producers in adopting best practices that would help prevent any possible connection between drilling and seismic events. In addition, he wanted to make sure that the OGS had the benefit of research by Continental geologists.”

Holland has denied that pressure from the oil and gas executives influenced his thinking, telling EnergyWire "None of these conversations affect the science that we are working on producing."

And today for Holland, the evidence seems to have overwhelmed Hamm's push for discretion. While saying that Oklahoma has seen spikes in earthquakes in the past when no drilling was going on, he told Bloomberg that he believes most of the new seismic activity is due to the injection of oil and gas wastewater.

“We don’t work in a vacuum, although a lot of people think science does occur in an ivory tower or vacuum," Holland told the Tulsa World earlier this year. "So clearly we feel pressures on both sides, and really we are trying to serve Oklahomans and understand things as best we can.”