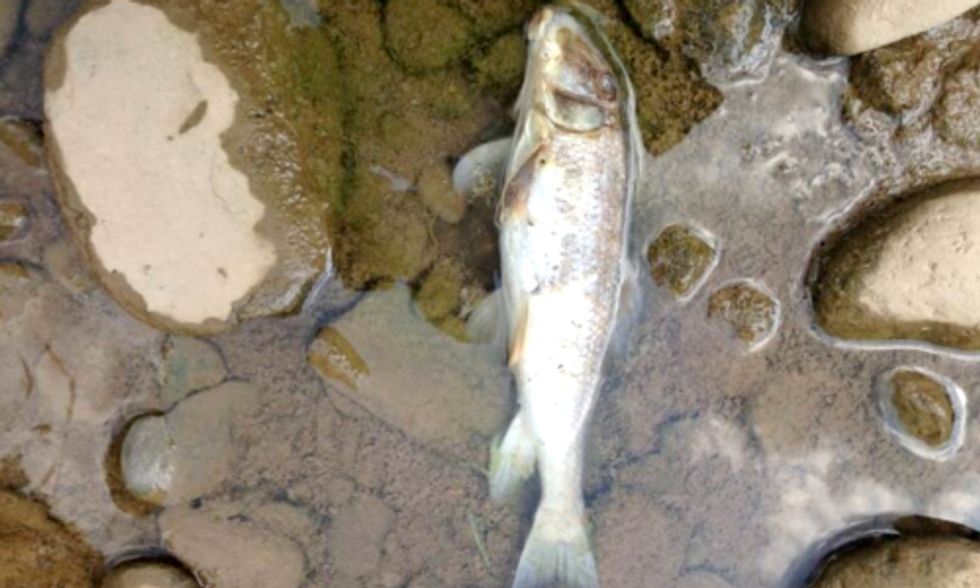 Ohio Department of Natural Resources and state Environmental Protection Agency officials have launched an investigation to find out what killed a large, but unspecified, amount of fish in a creek that feeds into the Ohio River.

While Ohio officials are willing to concede that a fire at a nearby shale gas fracking site "likely" contaminated Monroe County's Opossum Creek, according to the Columbus Dispatch, one environmental group appears more certain that those dots have a connection. An ODNR official confirmed the fish kill Sunday—just a day after the fire temporarily displaced about 25 area families.

Ohio officials initially said they did not know if a nearby fracking fire caused a fish kill, but that soon changed. Photo credit: Nathan Johnson / Ohio Environmental Council

“The fracking fire appears to have left a miles-long trail of death and destruction in its wake with thousands of dead fish and wildlife floating belly up in this once pristine stream,” Nathan Johnson, staff attorney for the Ohio Environmental Council. “This may be unprecedented, perhaps the biggest Ohio fish kill in memory related to the oil and gas industry."

The fire occurred on the Eisenbarth well pad, near the West Virginia border, after fracking fluid tubes malfunctioned. The fire spread from the tubes to about 20 trucks that were lined on the pad. It could have killed the crayfish, minnows and smallmouth bass that died as far as 5 miles away from the site.

Fish were reportedly killed up to five miles away from the fracking site. Photo credit: Nathan Johnson/Ohio Environmental Council

ODNR spokeswoman Bethany McCorkle told the paper she did not know whether the fracking contaminants had reached the Ohio River, and  the EPA said it doesn’t know yet if drinking water in the area has been impacted. Additionally, John Shreve, Monroe County environmental health director, said the contaminants that killed the fish might not be enough to contaminate groundwater.

Shreve said his department is monitoring water quality, administering requested well testing, though no well owners have asked for testing yet.

However, Ohio Environmental Council representatives say the incident is particularly troubling since the creek was once proclaimed by the EPA as one of the state's cleanest waterways.

Monroe County, Ohio's Opossum Creek was once deemed one of the cleanest waterways in the state. Photo credit: Nathan Johnson/Ohio Environmental Council

“Who is to say that more fracking-related environmental tragedies like the one we appear to be seeing in Opossum Creek won’t occur in the future,” Johnson asked. “We just saw a major well blow-out in Morgan County this past May that threatened a nearby creek.”

“The Ohio legislature needs to step up and overhaul Ohio's pitifully toothless existing law to mandate a much larger separation buffer between oil and gas well sites and nearby streams. Extending the legal stream buffer is an urgent no-brainer for Ohio’s environment.”

No injuries were reported in the fire.