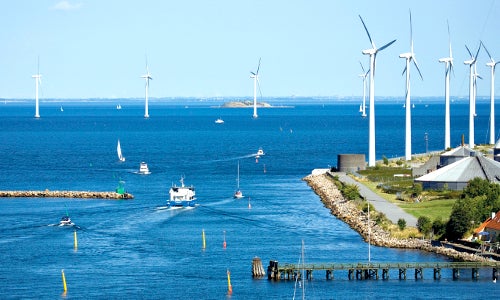 Offshore wind farms are coming to the U.S., the Department of Energy (DOE) announced this month, but nobody is sure just when.

Eleven offshore wind projects have reached “an advanced stage of development,” according to the 2013 U.S. Offshore Wind Market and Economic Analysis, published earlier this month by Navigant Consulting. The farms would collectively generate 3,824 megawatts (MW) of energy. Parties involved in the projects have all signed a power purchase agreement, received approval for an interim or commercial lease in state or federal waters, or conducted baseline or geophysical studies at a proposed site. 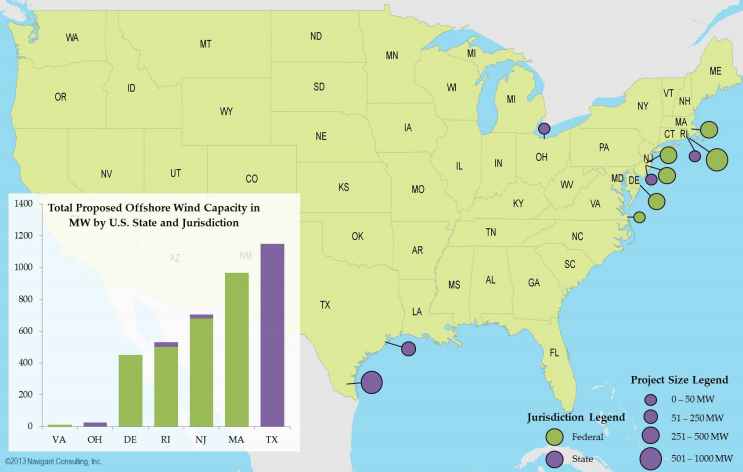 The report shows that cost-competitiveness, regulatory processes and a lack of infrastructure—including offshore transmission and purpose-built ports and vessels—as the main deterrents to offshore development. Still, the Atlantic Wind Connection and New Jersey Energy Link  are two transmission infrastructure projects that made progress in the past year, according to the report.

Though no offshore wind farms currently exist in the country, the DOE has committed more than $300 million to the development of 72 offshore wind projects. Most of the funding was approved in fiscal years 2011 and 2012, though the DOE in 2006 began issuing $2.5 million to Bowling Green State University to research and remove impediments for deploying wind turbines on Lake Erie.

The average size of the turbines in the advanced projects is just over 4 MW, which is larger than most that are on shore.

“This trend toward larger turbines will likely continue, driven by advancements in materials, design, processes and logistics, which allow larger components to be built with lower system costs,” the report reads. “The United States is largely planning to utilize larger offshore turbines rather than smaller turbines that have previously been installed in European waters.”

The DOE also released information about various wind-farm studies that agencies and universities are collaborating on, ranging from interconnection to environmental surveys and electromagnetic interference mitigation. For example, the DOE, National Oceanic & Atmospheric Administration, National Weather Service and a host of private companies have been working on the Wind Forecast Improvement Project, which seeks to upgrade short-term weather forecast models for predicting foundational weather parameters that impact wind energy generation. A final report is expected by December.