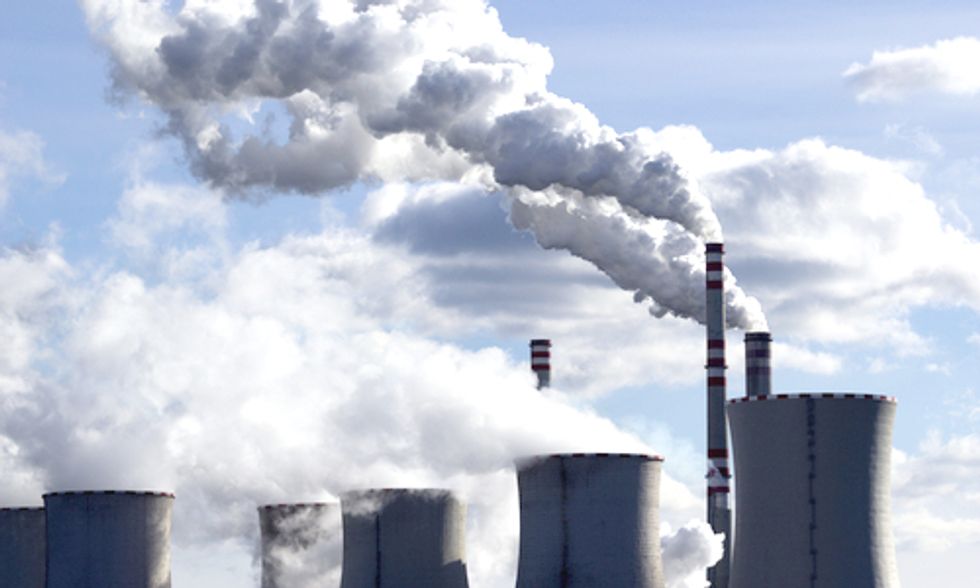 For the first time in U.S. history, an administration has proposed rules to cut carbon-dioxide emissions from existing power plants.

The U.S. Environmental Protection Agency (EPA) has proposed that existing plants reduce carbon emissions by 30 percent—compared to 2005 levels—by 2030. Coal-fired power plants are responsible for about 40 percent of the country's emissions and collectively constitute the nation's single-largest source of greenhouse gas pollution.

If reached, that goal would represent "net climate and health benefits" of $48 billion to $82 billion, according to the EPA's 645-page document. Despite that reduction, coal and natural gas would still remain the country's top two sources of energy, combining for more than 60 percent of the grid, the EPA projects.

Existing power plants are the target of the EPA's carbon regulation proposal.
Photo courtesy of Shutterstock

Though the carbon rule represents a monumental moment many environmentalists have been awaiting, it remains a proposal until June 2015, when the open period for revisions and public comment ends. Still, optimism arose Monday for the centerpiece of President Barack Obama's climate action plan.

"The President promised he would act to tackle the climate crisis and protect the health of our children and grandchildren—and he is keeping his word," Michael Brune, executive director of the 2.4 million-member Sierra Club said prior to the rules' unveiling. "These aren’t just the first-ever protections to clean up carbon pollution from power plants, they represent the largest single step any President has ever taken to fight climate disruption."

Emissions dropped by about 10 percent from 2005 to 2012, which is a "good start" when coupled with advances in renewable energy and efficiency programs, Obama said. Still, the rules are needed for the country to do its part in curbing climate change, scientists have warned about for years.

The EPA believes researchers and developers, as well as individual cities and states, have shown that the 30-percent target is achievable because current innovations in electricity and sustainability. Just last week the solar energy sector celebrated dominating the first quarter of 2014 with 74 percent of all new energy capacity.

“This is a critical first step toward the U.S. meeting its obligations as a good global citizen to reducing its greenhouse gas emissions,” said Dr. Michael E. Mann, an author and director of Penn State University's Earth System Science Center.

Rhone Resch, president and CEO of the Solar Energy Industries Association, said the proposal an opportunity for the nation to continue its increased deployment of renewable energy.

“When it comes to environmental protection, today is a defining moment in American history," Resch said. "As a nation, we're poised to finally turn the page from sooty smokestacks to sunnier skies—and America’s solar energy industry is uniquely positioned to play a key role in the fight against climate change.

“At their very heart, the proposed new EPA regulations provide a common sense and flexible approach to reducing harmful greenhouse gas emissions across the U.S.  They also can serve as a roadmap for future renewable energy policy in America."

The House of Representatives and coal industry are largely expected to push back on the rule, particularly as the November elections approach. While clean energy advocates and legislators who support their cause will argue about the positive impact the rule will have on the air we breathe, opposers will focus on the potential for job losses. Governors in coal-heavy states like West Virginia, Kentucky and Kansas have already directing their state environmental agencies to craft their own carbon emission plans that focus on compliance costs for individual power plants, the Associated Press reported.

Greenpeace USA Climate and Energy Campaign Director Gabe Wisniewski says pushback regarding the rule's potential economic impact from the industry, legislators and lobbyists like the American Legislative Exchange Council is to be expected, though, it will likely make little sense.

"The most successful and innovative businesses in the country are sprinting to adopt efficient, renewable energy," he said in a statement. "Leading technology companies like Apple, Facebook and Google have all committed to power with 100-percent renewable energy, and dozens of other Fortune 500 companies are joining them."

The Hip Hop Caucus, which played a crucial role in inspiring the youth vote in recent elections, also expressed approval of the rule proposal.

"For the civil right generation and the post-civil right generation—named the Hip Hop generation by many—solving climate change is a 21st century civil rights struggle," said Rev. Lennox Yearwood Jr., the group's president and CEO. "The creation of carbon pollution standards is best for all of America. We must protect all of our citizens—rich and poor, women and men, the elderly and children, those of all races—from health- and life-threatening pollution.

"Carbon pollution standards for existing power plants are about making our country the best it can be."

Some groups were supportive of the proposal, but said it was a little too late and could have done more.

“Waterkeeper Alliance is supportive of President Obama’s actions today to cut carbon emissions and protect the environment,” said Donna Lisenby, the organization's global coal campaign coordinator. “The rulemaking comes late in the Obama Presidency and doesn’t go as far as we’d like, but it's welcome news for our nation’s rivers and environment.

"We would have preferred a stronger rulemaking that took effect immediately and required deeper carbon cuts, but this action is welcome news for everyone who respects and appreciates the value of our nation’s threatened waterways and the health of our planet.”