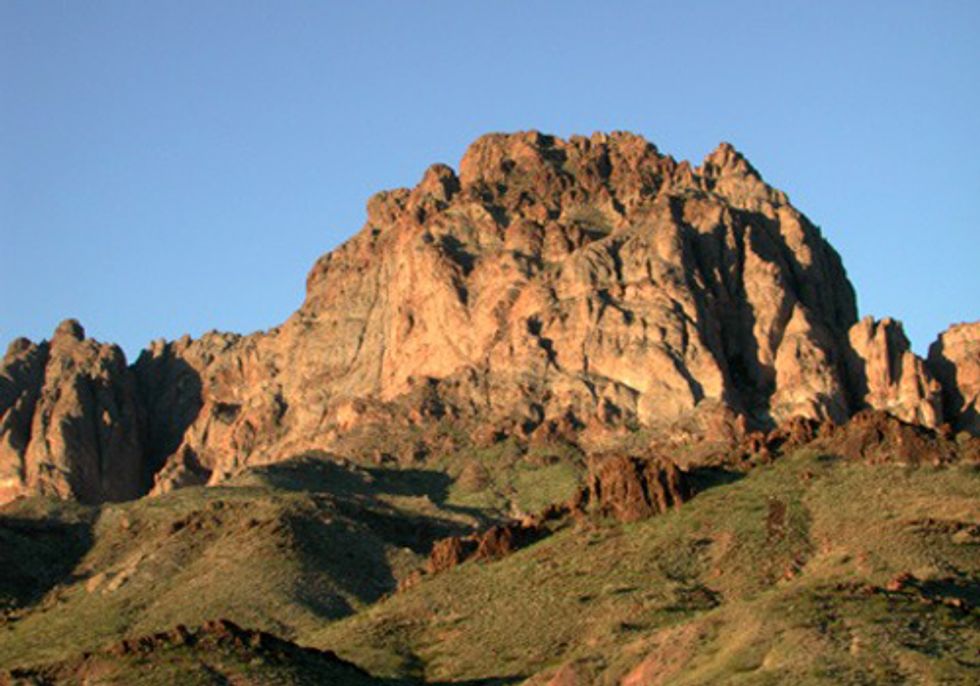 Turtle Mountain Wilderness, which is adjacent to the now eliminated, but proposed Iron Mountain solar energy zone. Thanks to a deliberative study process embraced by the Interior Department that made substantive changes in the design of the final solar program, critical areas like this have been spared from additional pressures poised by energy development.

Today Interior Secretary Ken Salazar signed a record of decision establishing a brand new program for the Bureau of Land Management (BLM) that will provide a comprehensive framework for managing the solar resources found on public lands in six southwestern states. This is a remarkable accomplishment as few Interior Secretaries have established original initiatives without a prior congressional order. No overriding regulation mandated the establishment of this program—although it was dictated by the biggest threat the public lands have ever faced—climate change.

Maybe few new programs, such as this solar program, are established because it's not an easy task—especially if you want the program to endure. There are no specific statutory requirements that must be met: only experience with existing programs to rely on. Because of the lack of direction, the "decider" really has to be open to input from stakeholders and be prepared to change his mind about what the program should entail based on that input. If it's a big program with a high risk of serious and extensive environmental impacts like the solar program, the Secretary has to be committed to the National Environmental Policy Act (NEPA) process and willing to alter draft components of the new program based on what is revealed in that progression. If the stakes are high, as they are with the solar program, the Secretary needs to also devote the time and energy needed to develop a sound program and to ensure that adequate staff resources are also available. On numerous occasions in the past, we have seen secretaries develop other programs and policies and fail to meet most, if not all, of these "tests."

Compared to other BLM mandates such as managing oil and gas drilling, or hardrock mining, or livestock grazing, this solar zone program is particularly unique in its construction. In the past, BLM inherited its challenges. Industries like oil and gas drilling on the federal lands predated the formation of the BLM, forcing the BLM to enter into a never-ending game of catch-up—never quite able to implement management protocols that were truly proactive. In a lot of ways, BLM has been forced into a scenario akin to trying to rebuild a car engine while also whizzing down the freeway at breakneck speeds. In contrast to the traditional BLM way of construction, the new solar zone program allows the BLM the opportunity to assemble a program from scratch.

It is also key to understand the BLM’s evolution over the last seven years in grappling with the challenges presented by utility scale solar development. In 2005, Congress passed the Energy Policy Act of 2005, with the goal of generating 10,000 MW of renewable energy on public lands by 2015. In addition, an ambitious California renewable portfolio standard spurred further interest in solar development on BLM lands. By 2008, the BLM had more than 500 solar applications, but there was nothing orderly about how the agency was processing and managing these applications. More than 80 million acres of public land were made available for solar development with practically few considerations made for environmental suitability, and there were no financial diligence requirements for applicants either. Consequently, proposed projects were literally all over the place: some applications were located in wilderness areas, while others were nominated in regions that had no electrical transmission necessary for development, or in spots that did not even have adequate solar radiation or insolation needed for production. The situation was a mess, and BLM staff were more vested in their traditional role of overseeing oil and gas development than addressing the emerging need for developing cleaner sources of energy.

Zones and landscape planning receive their due

The situation started to change in 2009, when Secretary Salazar committed to develop a new solar program to address these numerous inadequacies. However, the first attempt to establish a solar program left much room for improvement. Rather than embracing an approach that would minimize the footprint and impacts of these utility scale sized projects by screening for suitability, BLM proposed to allow development on a whopping 22.5 million acres. But that first proposal also included a kernel that would provide a better path forward—the creation of 24 solar energy zones on 687,000 acres. The addition of zones in that first draft was critical. The zone approach was a revolutionary way to look at energy development. Instead of a process that allowed applicants to pick areas based solely on the quality of the solar energy resource, a zone approach would attempt to analyze development from a landscape perspective, in an effort to funnel development to pre-identified areas based upon a series of environmental and infrastructural screens. Well-designed solar zones will ideally include lands that are previously disturbed, close to transmission and other infrastructure, and do not have acute conflicts with wildlife and other critical ecological resources.

Reducing the footprint by millions of acres

Unfortunately, that first tranche of 24 solar zones did not meet this standard. Some zones were not adequate for the technological needs of solar development, and other zones were simply ecologically inappropriate for development (such as the Iron Mountain zone, a zone that contained and was adjacent to numerous wilderness quality lands). Nevertheless, the Interior Department did another remarkable thing: they listened to the input of stakeholders, and by the summer of 2012, the BLM proposed to focus development to just the solar energy zones, while also eliminating the opportunity to develop essentially without constraints on the 22.5 million acres as originally proposed. BLM also dropped seven poorly designed solar energy zones, including the aforementioned controversial Iron Mountain zone, and reduced the aggregate acreage by 400,000 acres. That left 17 solar zones on 280,000 acres.

As of this summer, BLM proposed an additional nomination process that would allow for the creation of new zones when necessary. The BLM also introduced a “variance” system for approximately 17.5 million acres. This system would allow developers to apply for a variance in order to develop projects outside of a solar zone if they could meet a series of strict environmental and performance criteria. And while the Natural Resources Defense Council (NRDC) supports the flexibility that the variance protocol provides, by affording a process for developers to identify potentially additional suitable areas for development, the variance system should be considered as the exception rather than the norm given that the current zones are more than adequate for the foreseeable future.

Turning qualitative choices into a quantifiable program that protects resources

NRDC’s advocacy is often driven by a qualitative conviction that sensitive lands must be preserved for future generations, but we also emphasize the importance of clear and consistent criteria and data. In the case of the new solar program, NRDC has worked with colleagues and other environmental and conservation organizations to define the importance of the lands in question through a series of ecological, wildlife, cultural and economic data points and screens—and we have urged the BLM to do the same. By adopting a consistent standard, we can begin to approach siting decisions in a pro-active and more comprehensive manner. In an ideal world, we would not have to contemplate any utility scale development in the desert, but the challenge of climate change is going to require new approaches to energy development. The threat that climate change poses for these desert landscapes is not going away, nor is the need for corresponding solar development.

Given that the BLM originally proposed solar development on 80 million acres, we are encouraged by today’s decision, which reserves development mainly to 280,000 acres—and it marks a huge improvement over the traditional BLM way of managing energy resources that allowed energy companies to dictate the terms before key management protocols were even established.

The following maps depict how the solar program has evolved over the last three years in the Southwest:

GIS Notes:  The maps depict an inset of the greater solar study area, in focusing on the predominant region of the Southwest slated for likely energy development.  In addition, the variance map does not represent the final variance area, but what was proposed in the Final EIS—the total variance area is likely to be somewhat smaller in the Record of Decision.