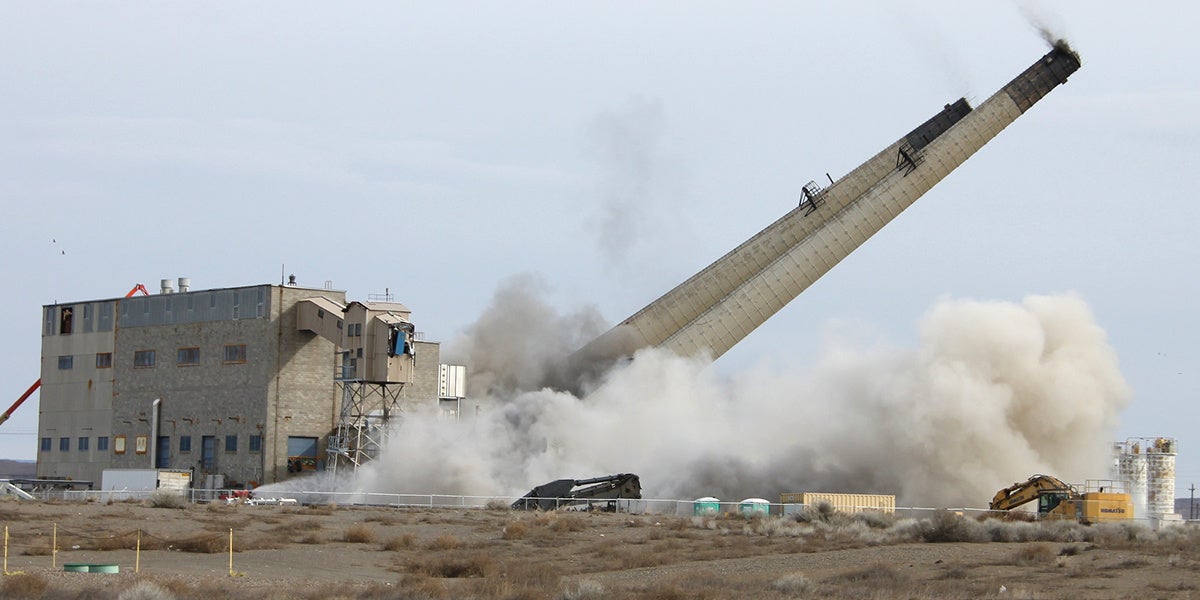 Seventy-five years ago, in March 1943, a mysterious construction project began at a remote location in eastern Washington state. Over the next two years some 50,000 workers built an industrial site occupying half the area of Rhode Island, costing more than $230 million—equivalent to $3.1 billion today. Few of those workers, and virtually no one in the surrounding community, knew the facility’s purpose.

The site was called Hanford, named for a small town whose residents were displaced to make way for the project. Its mission became clear at the end of World War II. Hanford had produced plutonium for the first
nuclear test in the New Mexico desert in July 1945, and for the bomb that incinerated Nagasaki on Aug. 9.

As a researcher in environmental and energy communication, I’ve studied the legacies of nuclear weapons production. From 2000 to 2005, I served with a citizen advisory board that provides input to state and federal officials on a massive environmental cleanup program at Hanford, now one of the most contaminated sites in the world.

As U.S. leaders
consider producing new nuclear weapons, I believe they should study lessons from Hanford carefully. Hanford provides one of the more dramatic examples of problems that unfolded—and persist today—at nuclear sites where production and secrecy took priority over safety and environmental protection. 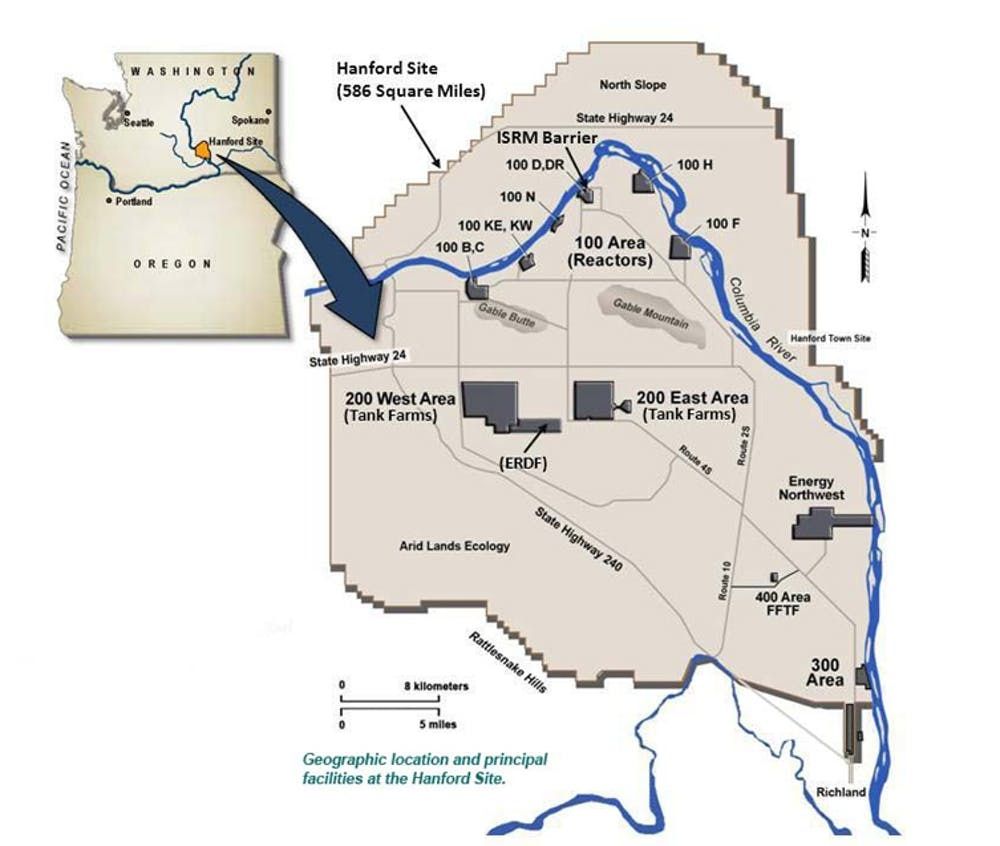 Hanford was one of three large facilities anchoring the
Manhattan Project – the crash program to build an atomic bomb. It was part of a larger complex linking facilities across the nation. A plant at Oak Ridge, Tennessee, enriched uranium and operated a prototype nuclear reactor. Los Alamos Laboratory in New Mexico assembled a cadre of world-class scientists to design and build the weapons, using materials produced at the other sites. Smaller facilities across the nation made other contributions.

As World War II phased into the Cold War and the U.S.-Soviet arms race escalated, new sites were added in Ohio, South Carolina, Florida, Texas, Colorado and elsewhere. Secrecy masked much of the work at these sites until well into the 1980s, with serious consequences for public health, worker safety and the environment. Nuclear and chemical wastes caused severe contamination at Hanford and the other sites, and dealing with them has proved to be difficult and costly. 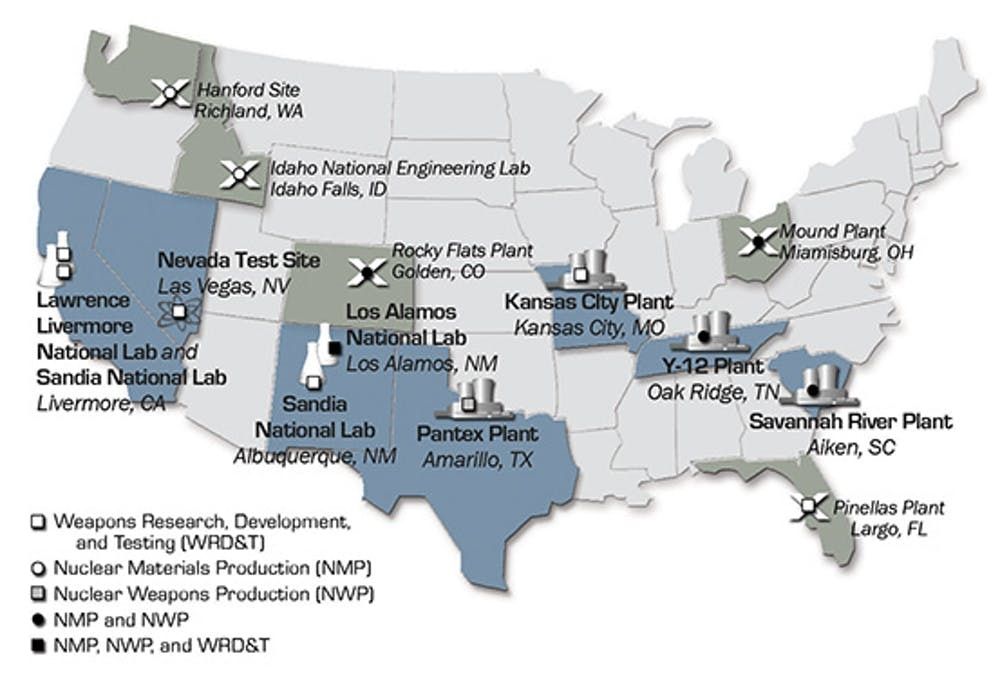 When the Soviet Union disintegrated in 1991, the U.S. had mass-produced some 70,000
nuclear bombs and warheads. Hanford made most of the plutonium used in those weapons. Workers irradiated uranium fuel in reactors, and then dissolved it in acid to extract the plutonium produced. This method, called reprocessing, generated 56 million gallons of liquid wastes laced with radioactive and chemical poisons.

Hanford’s nine reactors were
located along the Columbia River to provide a source of cooling water, and discharged radiation into the river throughout their lifetimes.

Fuel was sometimes reprocessed before its most highly radioactive isotopes had time to decay. Managers knowingly released toxic gases into the air, contaminating farmlands and grazing areas downwind. Some releases supported an
effort to monitor Soviet nuclear progress. By tracking intentional emissions from Hanford, scientists learned better how to spot Soviet nuclear tests.

Liquid wastes from reprocessing were stored in
underground tanks designed to last 25 years, assuming that a permanent disposal solution would be developed later. The U.S. Department of Energy, which now operates the weapons complex and its cleanup program, is still working on that solution. 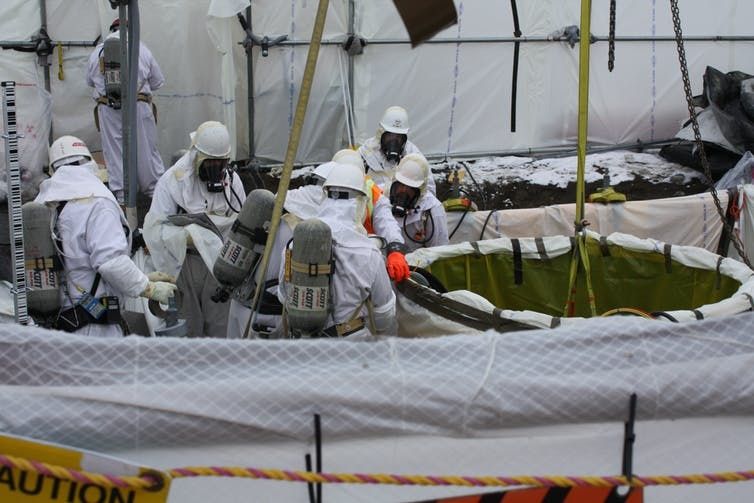 Workers prepare to remove the core from a waste tank at Hanford in 2010. Hanford Site

Meanwhile, at least a million gallons of tank wastes have
leaked into the ground. This material, and the prospect of more to follow, threatens the Columbia River, a backbone of the Pacific Northwest’s economy and ecology. Some groundwater is already contaminated. Estimates of when that plume will reach the river are uncertain.

Radioactive trash still litters parts of Hanford. Irradiated bodies of laboratory animals were
buried there. The site houses radioactive debris ranging from medical wastes to propulsion reactors from decommissioned submarines and parts of the reactor that melted down at Three Mile Island. Some nuclear decision makers have called Hanford a “national sacrifice zone.”

A Struggle for Accountability

In the mid-1980s, local residents grew suspicious about an apparent excess of illnesses and deaths in their community. Initially, strict secrecy—reinforced by the region’s economic dependence on the Hanford site—made it hard for concerned citizens to get information. 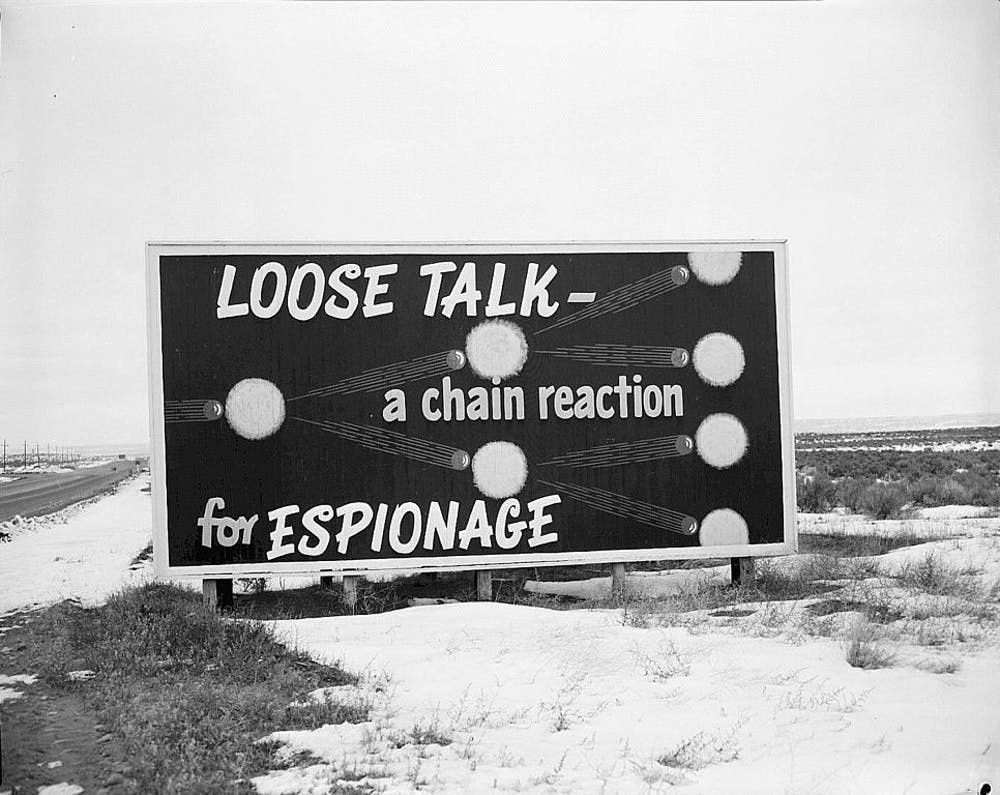 Once the curtain of secrecy was partially lifted under pressure from area residents and journalists, public outrage prompted two major health effects studies that engendered fierce controversy. By the close of the decade, more than 3,500 “downwinders” had filed lawsuits related to illnesses they attributed to Hanford. A judge finally dismissed the case in 2016 after limited compensation to a handful of plaintiffs, leaving a bitter legacy of legal disputes and personal anguish.

Cleanup operations at Hanford began in 1989, but have been hamstrung by
daunting technical challenges and management errors. The current estimate assumes work will continue through 2060 and cost more than $100 billion, beyond the approximately $50 billion already spent.

A key challenge is building a facility to extract the most toxic materials from the tank wastes and enclose them in glass logs to be sent elsewhere for permanent burial.
Projected costs have ballooned to more than $17 billion, and the estimated completion date is now 2036. And with the proposed Yucca Mountain nuclear waste repository in Nevada mired in controversy, there is still no final resting place for these materials, which will be dangerous for tens of thousands of years.

Cleanup has progressed in other areas. The reactors have been shut down and enclosed in
concrete and steel “cocoons” until their radioactivity decays further. Hanford’s “B Reactor,” the world’s first large-scale nuclear reactor, is now part of the Manhattan Project National Historic Park.

Buffer lands around the outer parts of the site, presumably clean enough for the purpose, have been converted to
wildlife refuge areas. And in 2015, the Laser Interferometer Gravitational Observatory (LIGO), with a station located at Hanford, detected the first gravitational waves predicted by Albert Einstein. LIGO scientists chose Hanford for its remote location and minimal interference from human activity.

The Department of Energy now considers
many of its former nuclear weapons production sites to be fully cleaned up. Some remaining sites are involved in maintaining the current nuclear arsenal and could play roles producing new weapons. Others, like Hanford, are “legacy” sites where cleanup is the sole mission.

There is more oversight of the nuclear weapons complex today, but serious concerns remain. Notably, inspectors have found problems at
Los Alamos National Laboratory dating back to 2011 related to handling of beryllium, a toxic material that can cause cancer and lung disease.

These issues at Hanford and other nuclear sites are reminders that nuclear weapons production is a risky process—and that in Washington state and elsewhere, legacies of the Cold War are still very much with us.