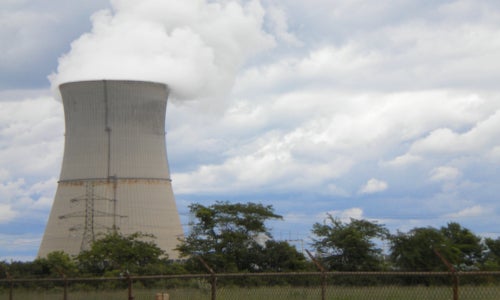 At the same time that FirstEnergy is pursuing a 20-year operating license extension for its Davis-Besse nuclear plant in Ohio, the utility also wants more time to demonstrate that it complies with fire safety standards. 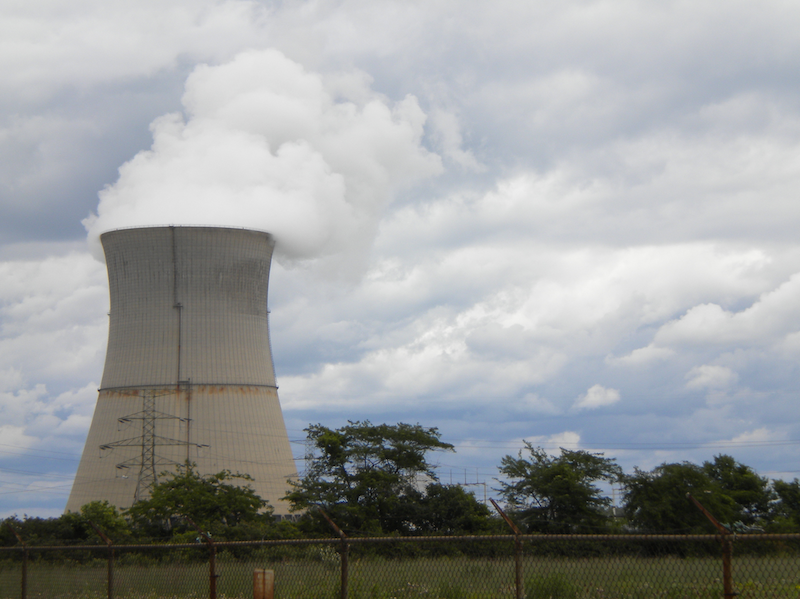 Cooling tower at the Davis-Besse Nuclear Power Station in Oak Harbor, OH, is one of the dozens of plants that have been out of compliance with federal fire laws for 10 years. Photo credit: Kathiann M. Kowalski /Midwest Energy News

FirstEnergy wants the Nuclear Regulatory Commission to give it until Dec. 31, 2015 to show how the plant will meet risk-based standards for preventing and responding to fire. The company’s submittal would otherwise have been due on June 30.

Davis-Besse is among dozens of nuclear power plants that, from a technical standpoint, have been out of compliance with federal fire regulations for at least a decade.

The Nuclear Regulatory Commission (NRC) adopted comprehensive fire protection rules in 1980. The rules spell out steps to prevent a catastrophic fire like one that raged through Alabama’s Browns Ferry power plant in 1975.

By the late 1990s, however, the NRC discovered that approximately half of the country’s 104 nuclear reactors did not meet the standards. For some plants, coming into compliance could become extremely expensive but offer little added safety.

Accordingly, in 2004, the agency adopted rules giving power plant owners an option. Owners could choose to stay with the 1980 fire safety rules, or meet the National Fire Protection Association’s performance-based standard for nuclear power plants. That standard is known as NFPA 805.

“Licensees have a choice,” says Alex Klein at the NRC in Rockville, MD. “It gives them flexibility.” Klein heads the Fire Protection Branch in the Division of Risk Assessment in the NRC’s Office of Nuclear Reactor Regulation.

The 1980 rules basically spell out what plants need to do and how to do them, explains Klein. NFPA 805 works differently.

“Under NFPA 805, or the risk-informed performance-based approach, it tells you what the end point should be, but it doesn’t define how to get there,” Klein says.

“Performance-based” means that owners must assess fire safety risks throughout their plants. They must then address those risks with procedural changes, physical plant changes, or both.

“In our view, the two sets of regulations are different,” notes nuclear safety engineer David Lochbaum at the Union of Concerned Scientists. “But if you comply with them, you achieve the same end state, which is you reduce the risk of fire to an acceptably low level.”

In 2005, FirstEnergy advised the NRC that its three nuclear power plants planned to move to NPFA 805. Those plants are the Davis-Besse and Perry stations in Ohio, and Beaver Valley Nuclear Power Station in Pennsylvania. About four dozen other power plants provided similar notifications to the NRC.

“That was an implicit concession that they didn’t meet the 1980 regulations,” says Lochbaum.

Lochbaum explained that if plants were already complying with the law, they wouldn’t have had to switch to the different standard.

“I call them nuclear outlaws, because they’re operating outside of the law,” Lochbaum adds.

“Approximately one-half of the core damage risk at operating reactors results from accident sequences that initiate with fire events,” the NRC’s Jack Grobe reported at a 2008 briefing.

In other words, says Lochbaum, “One-half of the risk of meltdown is due to fire hazard.”

FirstEnergy has done a lot of work on fire protection in the decade since the NRC adopted the NFPA 805 option, says Paul Harden, Senior Vice President for Fleet Engineering at FirstEnergy.

For starters, the company decided its Perry power plant does not need the NFPA 805 option after all. It will stick with the 1980 rules. The Perry plant began operating in 1987. Thus, requirements of the 1980 rules should have been taken into account as it was built.

“Perry is a much newer plant” than Davis-Besse, notes Harden. “Perry complies with all the current fire protection regulations.”

Dealing with the Davis-Besse plant is more complicated.

“Our Davis-Besse plant is in the process of completing our internal development of our application for the transition to NFPA 805,” says Harden.

In November, FirstEnergy plant engineers met with NRC staff to review progress at Davis-Besse. On the one hand, using NFPA’s risk-based approach could save plants from having to make changes that might have little real benefit.

On the other hand, the NFPA 805 approach requires costly and extensive studies.

“All of the licensees that we’ve seen so far are doing very detailed fire probabilistic risk assessments in addition to fire modeling,” says Klein.

All the documentation can easily run to tens of thousands of pages.

“We’ve drafted most of the work for our Davis-Besse plant,” says Harden. However, the company wants to wait until its pending application for Beaver Valley gets through the NRC’s review process.

That way, says Harden, “We can factor in any feedback or questions they have.”

“It’s much less time-consuming and much less costly to make any changes we need to make before we submit it,” explains Harden.

Toward that end, the company wants until late 2015 to submit its license amendment application for NFPA 805.

“FirstEnergy’s decision to defer its Davis-Besse submittal until after hearing from NRC regarding its Beaver Valley submittal makes sense,” notes Lochbaum.

As it is, doing all the engineering studies and going through the license amendment process costs millions of dollars, Harden says.

The Fukushima power plant did not fall down after a massive earthquake and tsunami struck Japan in March 2011. However, power failures prevented pumps and related machinery from cooling reactor cores and shutting them down safely.

In the wake of the disaster, the NRC conducted detailed studies and rulemaking review for nuclear power plants in the U.S. The agency and power plants nationwide are now implementing lessons learned from Fukushima. Some of those actions reduce fire risks too. “There is overlap,” notes Klein.

Examples include “installing or storing near the plants diverse ways to get emergency electric power,” Harden says. Each of FirstEnergy’s nuclear power plants will also have “diverse ways to move water.”

“Lessons learned” measures won’t be limited to earthquake or flood risks, either. A planned condensate storage tank at Davis-Besse will be “missile-protected,” notes Klein. “It would address any tornado-type issue.”

Until the NRC formally approves a license amendment, however, Davis-Besse and other plants moving to NFPA 805 still do not meet the letter of the law.

The NRC is not taking enforcement action against Davis-Besse or other plants as they make the transition to the performance-based standard. That exercise of discretion doesn’t mean there’s no risk, however.

And while Davis-Besse has some risk-reducing projects in the works, others will likely wait until the NRC approves its NFPA 805 application. That might now be in 2016 or later.

In the meantime, compensatory measures include hourly fire watch checks for a couple of areas at the Davis-Besse plant. The NRC also conducts triennial fire safety inspections at Davis-Besse, Perry and other nuclear plants around the country.

“I don’t fault companies for waiting for the NRC’s thumbs-up,” Lochbaum says. “If it were me, I’d do the same thing.”

Nonetheless, he notes, the rules aim to prepare plants to deal with a catastrophic fire automatically. Then plants shouldn’t have to rely on heroic human efforts. And proposed physical or procedural changes won’t reduce risk at Davis-Besse or other nuclear power plants until they’re implemented.

“The protection is not there until all that work is done,” notes Lochbaum.