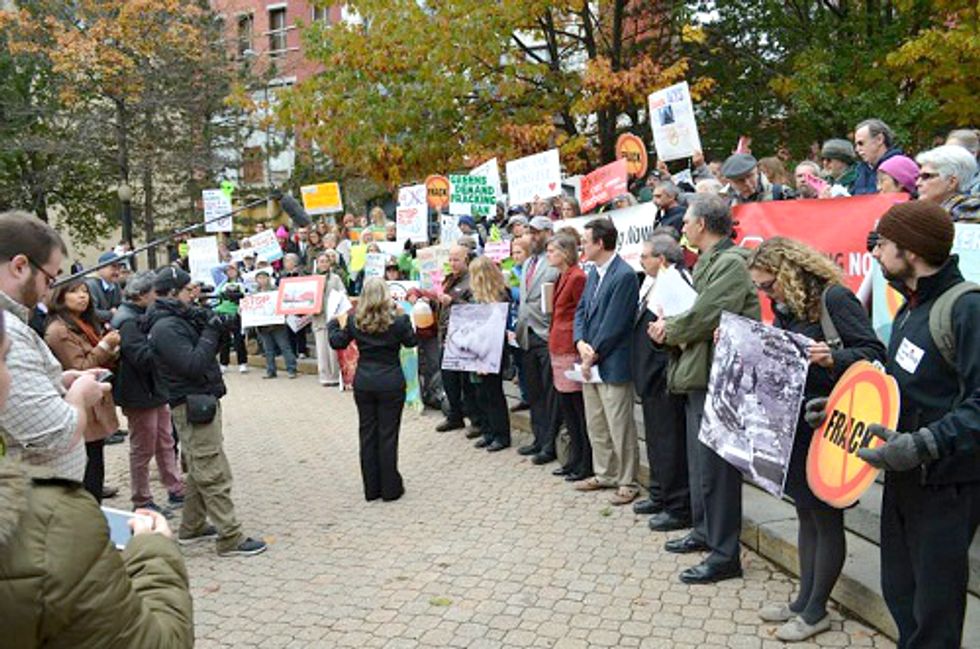 On Wednesday, Oct. 30, hundreds of New Yorkers from across the state came to Albany to expose Gov. Cuomo (D-NY) and the Department of Environmental Conservation’s (DEC) proposed Liquefied Natural Gas (LNG) regulations for what they are: fatally flawed, a danger to public health and our wellbeing and supportive of a massive fracking infrastructure build out.

For some background, New York has had a ban on LNG facilities since 1973, when a horrific explosion in Staten Island killed 40 workers. Now the natural gas industry is lobbying to lift the ban, and the DEC has come out with a new eight-page regulatory framework based on an antiquated 1976 law.  Publicly, the DEC and the gas industry claim that the regulations are just to allow for small-scale truck fueling stations and have nothing to do with fracking, but the new regulations go well beyond DEC’s stated goals. The truth is that they would give a green light for the oil and gas industry to potentially build out a massive infrastructure for fracking, including enormous import/export facilities.

Noting this contradiction, the gross inadequacies in the regulations and that expanded natural gas infrastructure is not in New York’s best interests, the New Yorkers Against Fracking coalition has called on Gov. Cuomo and the DEC to withdraw the regulations.

The room meant for 125 people was filled beyond capacity, with many left waiting outside on the street, unable to enter. Photo credit: Frack Action

Oct. 30 marked the one and only public hearing on the proposed regulations. The hearing took place at DEC’s headquarters in Albany at 2:00 p.m. Preceding it, at 12 noon, hundreds of New Yorkers rallied outside, demanding that the regulations be withdrawn and that New Yorkers want a renewable energy future, not fracking or its dirty infrastructure.

At 1:00 p.m., we lined up outside of the DEC’s office to enter the hearing and testify against the proposed regulations. As the media reported, within minutes the room meant for 125 people was filled beyond capacity, with many left waiting outside on the street, unable to enter.

Dozens delivered crippling testimony, demonstrating that the regulations are not based in science, do not protect public health and the environment, and that the only basis for them comes from a “study” done by a LNG company that directly stands to significant benefit—a stark conflict of interest.