Natural Gas Prices Will Skyrocket if Frack Gas is Exported 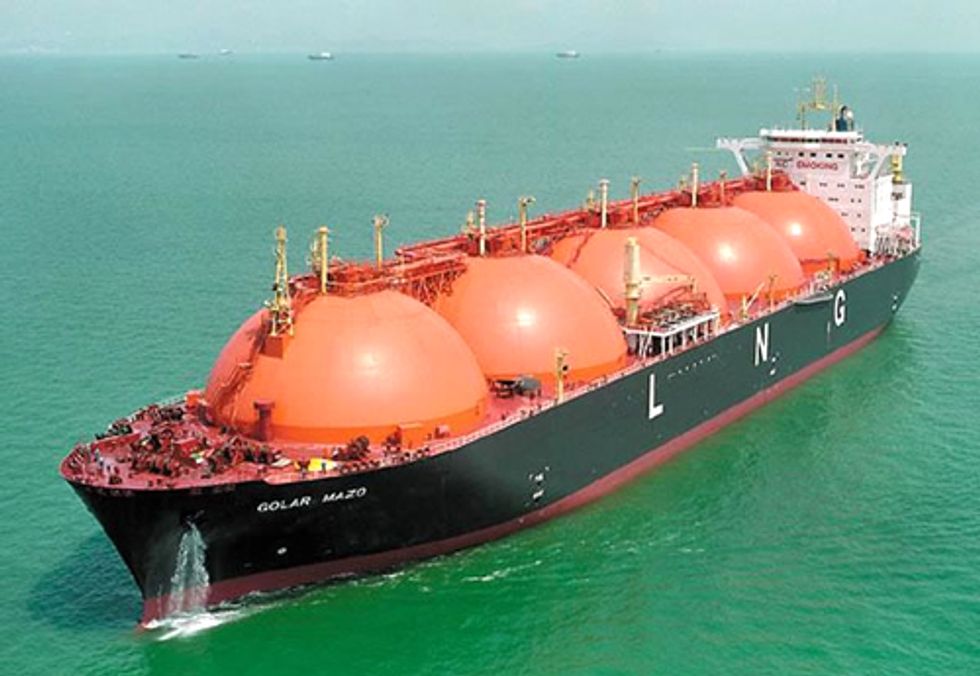 Exporting LNG to Europe and the thirsty markets of Asia could be a sign of things to come.

The oil and gas industry has long argued that the fracking boom sweeping America will lead to an age of plenty where gas prices remain low indefinitely, energy is cheap and jobs are created.

But the oil and gas industry does not work in geographical isolation; it is an international industry. And increasingly the U.S. is looking to export frack gas as liquified natural gas (LNG).

Yesterday came the first of what could potentially be many deals. The British company Centrica announced that it had signed a $15 billion, 20-year, “landmark” agreement with Cheniere Energy Partners, which would allow it to export enough from the U.S. to supply just under 2 million British homes each year.

Exporting LNG to Europe and the thirsty markets of Asia could be a sign of things to come. Indeed, in the Financial Times, Ed Crooks argues that more than 40 percent of the entire U.S. marketed gas production could be exported, if all the LNG applications go ahead.

He writes: “The U.S. Department of Energy has been sent applications from 21 proposed LNG projects for permits to export a total of 28.3bn cubic feet of gas per day: 41 percent of the entire marketed gas production of the U.S. last year.”

The rush to export has provoked a backlash, and Crooks argues that: “An increasingly vocal campaign is arguing for a go-slow in allowing U.S. shale production to be exported as liquefied natural gas.”

The reason for this is simple old economics of supply and demand. At the moment, there is a glut of U.S. gas, driving down prices, but if 20 or 30 percent is exported, this will reduce supply in the U.S. and raise prices. And if prices rise, investment will fall, further curtailing supply and further increasing prices.

One businessman, Peter Huntsman, chief executive of Huntsman chemicals who is advocating a slowdown in exports, cautions that “the U.S. price of gas would skyrocket,” if LNG exports are allowed to continue.

Indeed, there is now an industry-backed campaign called America’s Energy Advantage that is warning that billions of dollars of potential investment in U.S. industry could be at risk if the large scale LNG exports do indeed happen.

The group—which includes the heavy energy users such as Dow Chemical, Huntsman and Alcoa—is essentially calling for exports to be curtailed soon.

On the other side of the fence more than 100 members of Congress have signed a letter asking for the Obama administration to “advance without delay … toward approval of export permits.”

The oil industry has also attacked opponents of exporting natural gas. Earlier this month, Exxon Mobil Senior Vice President Michael Dolan told an energy conference in Houston that “It’s absolutely embarrassing for people in our industry at very high levels to make a case that’s blatantly to put money in their pocket.”

Writing on the Oilprice.com website yesterday, Kurt Cobb author of the peak-oil thriller, Prelude, argued that the pro-export drive of the oil industry “is to get higher prices for its product than customers in the United States can provide.”

But all may not be what they seem in the U.S. right now he argues. Cobb argues that, even without a massive export boom, that “U.S. natural gas production could actually start declining soon and send prices soaring … the present and the past suggest that the so-called shale gas revolution is about to be laid to rest.”

If Cobb is proved right, and that is a big if, Centrica may have just bet $15 billion on the wrong horse.