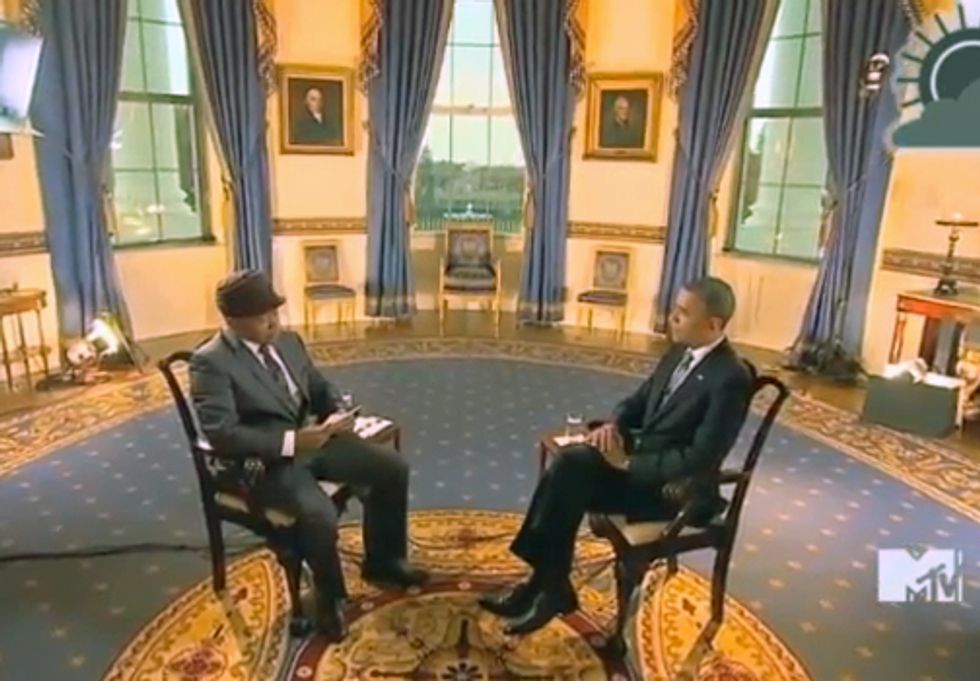 Williams asks in the interview:

Until this year global climate change has been discussed in every presidential debate since 1988. It was a big part of your previous campaign but pushed back on the back burner. Given the urgency of the threat, do you feel that we're moving quickly enough on this issue, number one, and Samantha from New Jersey wants to know what will you do to make it a priority?

The answer is number one, we're not moving as fast as we need to. And this is an issue that future generations, MTV viewers, are going to have to be dealing with even more than the older generation. So this is a critical issue. And there is a huge contrast in this campaign between myself and Governor Romney.

I am surprised it didn't come up in one of the debates. Gov. Romney says he believes in climate change. That's different than a lot of members of his own party that deny it completely. But he's not sure that man-made causes are the reason. I believe scientists who say we are putting too much carbon emissions into the atmosphere and it's heating the planet and it's going to have a severe effect.

There are a lot of things we have done a lot of things in the last four years. We have already doubled the fuel efficiency standards on cars and trucks. That's the first increase in 30 years in the fuel mileage standards. As a consequence we will be taking huge amounts of carbon out of the atmosphere, even as we're also saving folks money at the pump and reducing our dependence on foreign oil. We have doubled clean energy production—wind, solar, biofuels—and that means that increasingly people are getting electricity, companies are generating power, without the use of carbon-producing fuels. And that's helping as well.

The next step is to deal with buildings and really ramp up our efficiency in buildings. If we had the same energy efficiency as Japan, we would cut our energy use by about 20 percent, and that means we'd be taking a whole lot of carbon out of our atmosphere. And if we do those things, we can meet the targets that I negotiated with other countries in Copenhagen, to bring our carbon emissions down by about 17 percent, even as we're creating good jobs in these industries.

In order for us to solve the whole problem though, we're gonna have to have some technological breakthroughs. Because countries like China and India, they're building coal-power plants and they feel that they have to prioritize getting people out of poverty ahead of climate change. So what we have to do is help them and help ourselves by continuing to put money into research and technology about how do we really get the new sources of power that are going to make a difference.

Thank you MTV for doing your part in bringing the issue of climate change to the forefront in this year's presidential election.

It's clear that PBS' Jim Lehrer, CNN’s Candy Crowley and CBS’ Bob Schieffer, refuse to heed the words of climate scientist and director of NASA’s Goddard Institute for Space Studies James E. Hansen, renowned chief economist from the International Energy Agency Fatih Birol speaking about the pressing need to transition away from fossil fuels and millions of Americans that continue to protest extreme fossil fuel extraction, money in politics and corporations putting profits before human health and the environment.