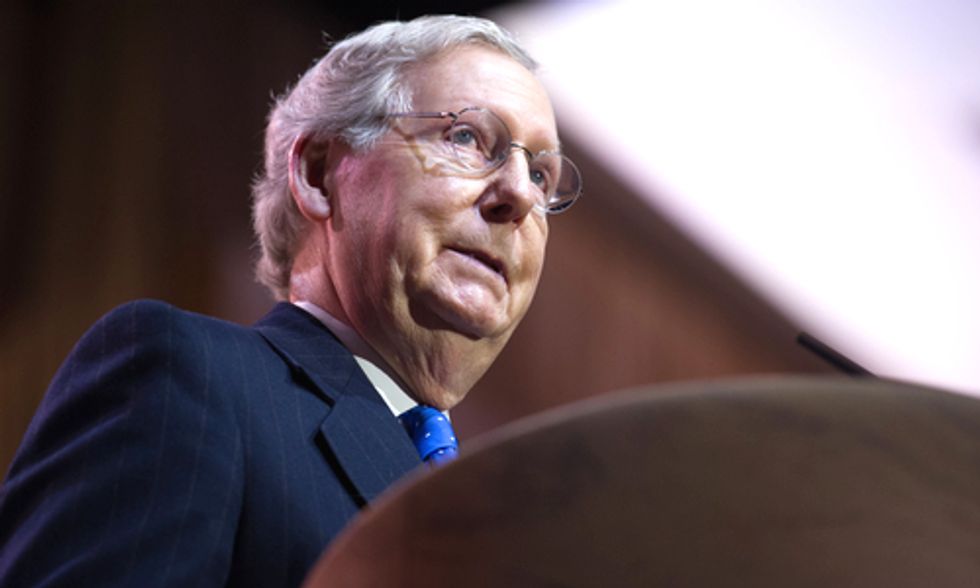 McConnell's measure would have blocked the regulations within Obama's proposal. It would have also provided the Senate minority leader a key piece of legislation for his November re-election bid, enabling him to discuss all the jobs he saved for his coal-reliant state.

McConnell will likely still say all of that, but won't have the accompaniment of his "Coal Country Protection Act." That's because U.S. Senate Majority Leader Harry Reid blocked McConnell's call for "immediate consideration" of the bill.

U.S. Senate Minority Leader Mitch McConnell wanted a quick vote on a bill to protect the coal industry, but it didn't happen.
Photo courtesy of Shutterstock

"The president’s energy regulations would hurt the poor, the unemployed, seniors, and especially families in Kentucky."

Reid followed that by reminding McConnell that there is a lengthy public comment period on the EPA plan. States will also have two-to-three years to submit final plans after the EPA's proposal is finalized.

However, it's true that McConnell's state will have a tougher time reducing carbon emissions than others. Kentucky gets a whopping 95 percent of its energy from coal plants. Those plants are clearly a vital part of the economy, but reducing the emissions that come from a state so reliant on coal would preserve the health of the workforce, regardless the industry residents are employed by.

Still, McConnell says 7,000 coal-sector jobs have been lost since Obama took office. That's not all the president's fault, though. Coal plants become more expensive to maintain as they age, making it an industry few want to continue investing in.

Bloomberg's map of retiring plants show that coal closures will take place in nearly every state, but that can't be attributed to those with different political beliefs than McConnell. After all, solar energy didn't capture 74 percent of all new electricity capacity during this year's first quarter because it's a bad investment. In fact, the U.S. Department of Energy reported earlier this year that solar energy is 60 percent of the way to achieving the $0.06-per-kilowatt-hour target set for 2020.

Welsh Government Offers Every Household a Free Tree to Plant