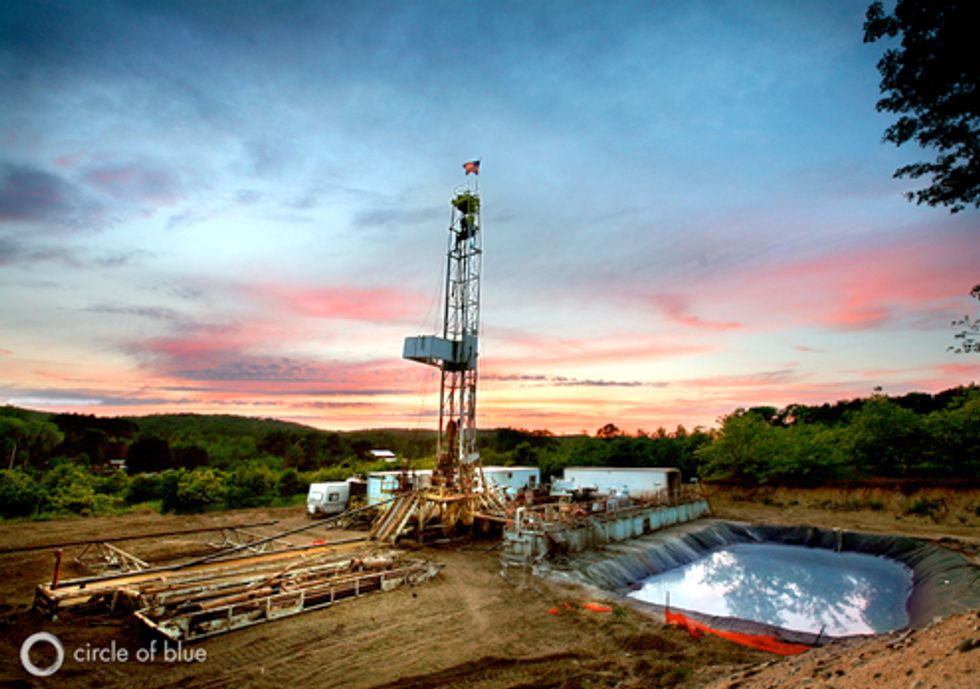 A new legal analysis by the National Wildlife Federation finds that laws in Michigan and Ohio need to be improved to protect the region's streams, rivers, lakes and wildlife from the risks of hydraulic fracturing, or “fracking.” Energy companies use this controversial technique to extract natural gas from fine-grained shale, injecting a mix of water, chemicals and sand into a well at high pressures to crack open the rock. The natural gas then flows out into the well and is captured aboveground. Fracking has raised significant environmental concerns, including the potential for impacts on water quality and water-dependent natural resources.

“Our analysis shows that Michigan and Ohio are doing some things right, but the states remain vulnerable to risks associated with fracking,” said Sara Gosman, water resources attorney for the National Wildlife Federation’s Great Lakes office and lecturer at the University of Michigan Law School. “We urge Michigan and Ohio to strengthen their laws to protect public health, wildlife and water resources now and for generations to come."

While fracking of shallow wells has occurred in Michigan for more than 30 years, energy companies are just beginning to use fracking within the Great Lakes basin to extract natural gas from deep shale formations. These deep shale wells can extend more than a mile below the surface and up to two miles horizontally. Fracking of deep wells requires more water, more chemicals and greater pressure on the well itself than fracking of shallow wells. Thus, deep wells pose more risks for water resources in the basin.

The new report—Hydraulic Fracturing in the Great Lakes Basin: The State of Play in Michigan and Ohio—reviews the legal framework governing the entire life cycle of fracking in both states. The report begins by examining three potential ways in which the water resources in the Great Lakes basin could be harmed by fracking: depletion of freshwater resources due to the large volumes of water needed to inject into deep wells; contamination from well production activities, including surface spills and underground leaks; and contamination from disposal of the well wastewater. For each of these three areas, the report then examines the laws that are intended to address the risks in Michigan and Ohio.

Unlike other industrial activities, fracking is not regulated by most federal environmental laws. The practice of fracking itself is exempt from the Safe Drinking Water Act, which governs underground injection. The primary focus of the report is therefore on state laws in Michigan and Ohio, including the recent steps taken by the states such as the passage in Ohio of SB 315.

The report, written by Gosman and University of Michigan Law School students, concludes that the laws address some of the risks of fracking, but that more needs to be done to fully protect the Great Lakes basin. The report specifically finds:

“Because there are very few federal requirements, it is up to the states to protect streams, rivers and the entire Great Lakes ecosystem,” said Gosman. “Our thorough review of the laws shows that Michigan and Ohio have taken significant steps, but they need to do more.”

“Michigan has been doing an admirable job on some fronts, but in other areas the state can do better,” said Grenetta Thomassey, Ph.D., program director, Tip of the Mitt Watershed Council. “As the Great Lakes state, Michigan has the opportunity to be a leader in protecting the states precious water resources.”

“Ohio has made a strong effort to keep pace with a drilling boom in the state,” said Tracy Sabetta, Ohio campaign director for the National Wildlife Federation. “But there’s more work to do if we are to adequately protect the health and safety of our families and our natural areas.”

The report recommends that Michigan and Ohio adopt several policy changes to protect the water resources of the Great Lakes basin, including:

“Extracting natural gas safely and responsibly requires adequate safeguards," said Gosman. "The good news is that the states have taken action to address the risks of fracking—but more still is needed.”