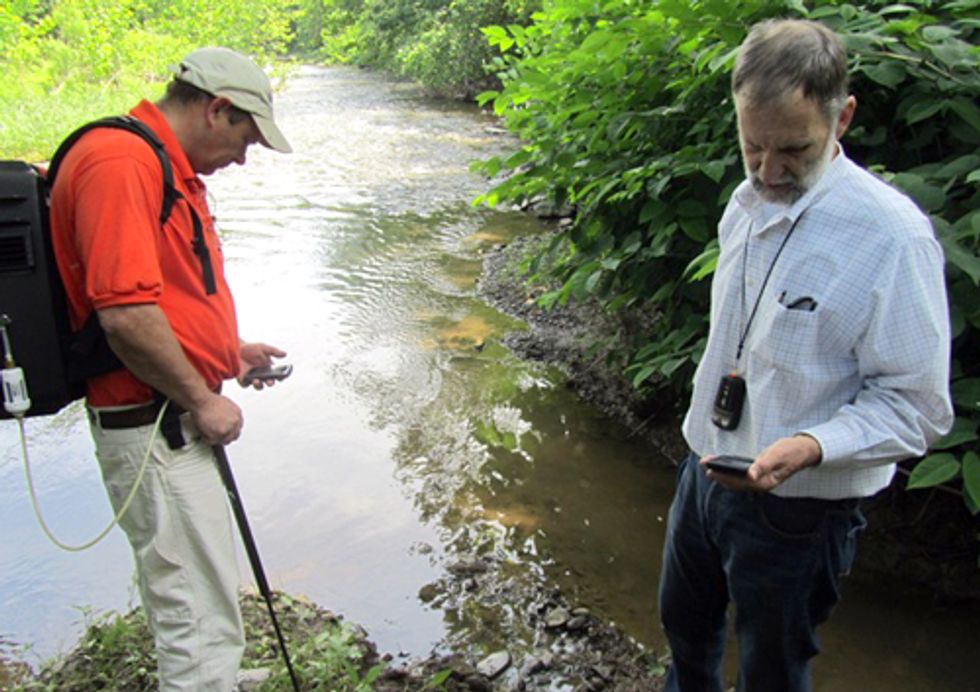 A water and methane geyser, bubbling water and mud volcanoes have Pennsylvania shale-field residents scared and demanding answers. A number of dramatic methane emissions were reported to have begun in Leroy Township, Bradford County on May 19, 2012. Initial reports from residents suggested that there may have been a substantial loss of control of natural gas from one or more of the shale gas wells in the area. The Pennsylvania Department of Environmental Protection (PA DEP) detected methane in nearby residents’ water wells, about one half mile from the Chesapeake-owned Morse well pad. Last week, there was a large methane and water geyser reported near one of Shell’s wells in Tioga County.

While PA DEP and Chesapeake monitored the Bradford County site, they have not yet released this data to the public. Area residents demanded third-party independent testing be performed. In response to residents’ requests, Clean Air Council, a Penssylvania clean air group, commissioned Gas Safety Inc. to monitor for potential methane leakages associated with the gas bubbling in Leroy Township.

While studies have estimated the amount of methane that is leaked or vented from natural gas equipment, Gas Safety claims that there is little to no data on how much is being emitted every day through naturally occurring fault lines that may have been altered by fracking.

“Two methane plumes were detected,” said Dr. Bryce Payne, environmental scientist and author of the report. “One larger plume substantially increased in size over a few hours, which suggests large amounts of methane were being emitted into the air. A smaller plume was also detected about 2 miles west of the larger one. The data and observations suggest natural gas has spread through an extensive underground area beyond where the plumes were found.”

“The International Energy Agency recently recommended in their Golden Rules for a Golden Age of Gas report that drilling companies need to carefully survey the geology of the region to avoid fault lines,” said Payne. “With the already-fractured geology of Pennsylvania and parts of New York, our methane measurements demonstrate that this may prove impossible to do.”

“There are some places that you just shouldn’t drill. Scientists must continue collecting data to answer whether or not the Marcellus Shale can be responsibly drilled or even meet minimal compliance with the EIA’s recommendations.”

While no isotopic testing has confirmed the methane source, the report points out that the sustained and elevated levels of methane were indicative of a fugitive source of upwind methane. The report also states that bubbling gas in Towanda Creek was consistent with how fugitive gas from shale wells would travel through faults, fractures, and groundwater aquifers. Researchers also found extremely high methane levels on the banks of the Towanda Creek and nearby residential water wells that were heavily contaminated with methane.

The results from this monitoring effort may shed light on the broader debate about the natural gas industry’s potential impact on climate change and even potential regional impacts on public health.

“Area residents and the Council are concerned about the potential health impacts from ground-level ozone, which is created when large quantities of methane mix in the air with other pollutants. Methane is also 21 times more potent a greenhouse gas than carbon dioxide, and the natural gas industry is the largest human-made source of global emissions. This could have a very fast and powerful impact on warming our planet,” Clean Air Council Outreach Coordinator Matt Walker said.

The Gas Safety report stated that the methane levels found in residents’ water were high enough to pose asphyxiation hazards if the water was used for showering or other high water uses in close quarters. Residents reported experiencing symptoms associated with asphyxiation.

Sherry Vargson, a Granville Summit resident, said “It makes me anxious because I don’t believe most of us know how to handle air issues. It’s not like you can put a filter on the air you breathe outside. Considering it’s a hazard, we should be made aware of what precautions we should take. I’d love to hear an answer.”

The Council shared the sampling data with the north-central regional offices of PA DEP, as well as PA DEP Secretary Michael Krancer, the U.S. Environmental Protection Agency, Region 3 and the Agency for Toxic Substances and Disease Registry, Region 3.