Could a Solution to Marine Plastic Waste Threaten One of the Ocean’s Most Mysterious Ecosystems? 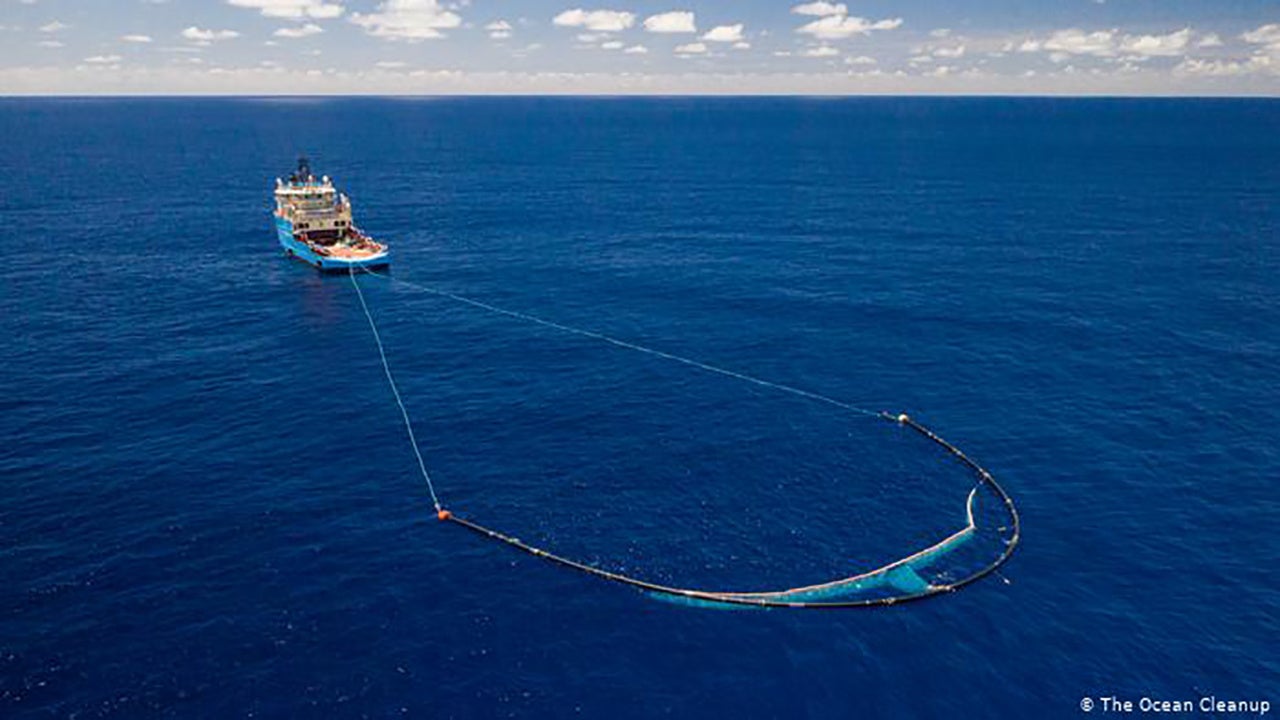 In May 2017, shells started washing up along the Ligurian coast in Italy. They were small and purple and belonged to a snail called Janthina pallida that is rarely seen on land. But the snails kept coming — so many that entire stretches of the beach turned pastel.

An unusual wind pattern had beached the animals. And for the people who walked the shore, this offered a rare encounter with a wondrous ecosystem that most of us have never heard about: The neuston.

The neuston, from the Greek word for swimming, refers to a group of animals, plants and microorganisms that spend all or large parts of their life floating in the top few centimeters of the ocean.

It’s a mysterious world that even experts still know little about. But recently, it has been the source of tensions between a project trying to clean up the sea by skimming plastic trash off its surface, and marine biologists who say this could destroy the neuston. 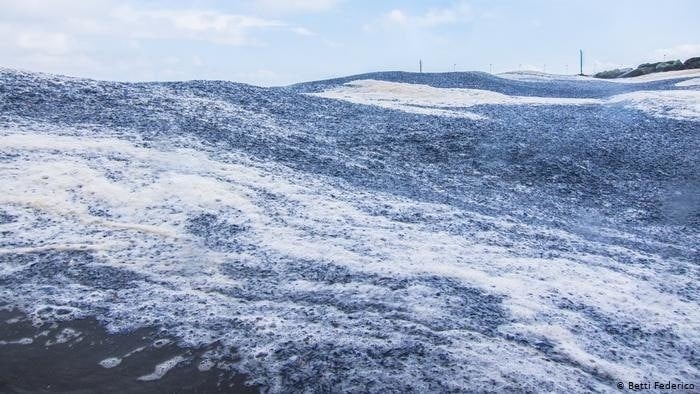 The Ligurian coast has been swept by snails turning its color pastel.

A World Between Worlds

The neuston comprises a multitude of weird and wonderful creatures.

Many, like the Portuguese man-of-war, which paralyzes its prey with venomous tentacles up to 30 meters long, are colored an electric shade of blue, possibly to protect themselves against the sun’s UV rays, or as camouflages against predators.

There are also by-the-wind sailors, flattish creatures that raise chitin shields from the water like sails; slugs known as sea dragons that cling to the water’s surface from below with webbed appendages; barnacles that build bubble rafts as big as dinner plates; and the world’s only marine insects, a relation of the pond skater.

They live “between the worlds” of the sea and sky, as Federico Betti, a marine biologist at the University of Genoa, puts it. From below, predators lurk. From above, the sun burns. Winds and waves toss them about. Depending on the weather, their environment may be warm or cool, salty or less so. 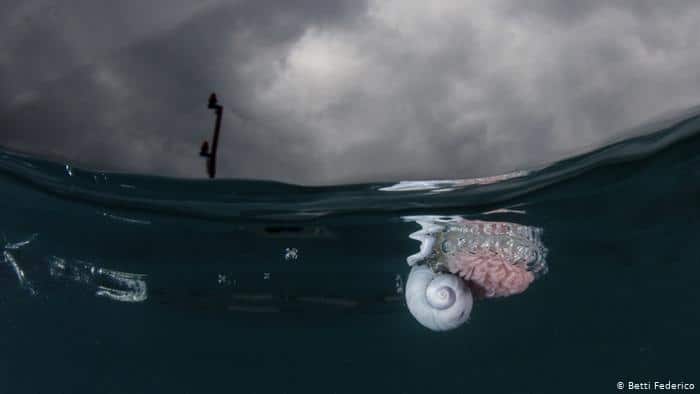 Sea snails can make up the neuston. 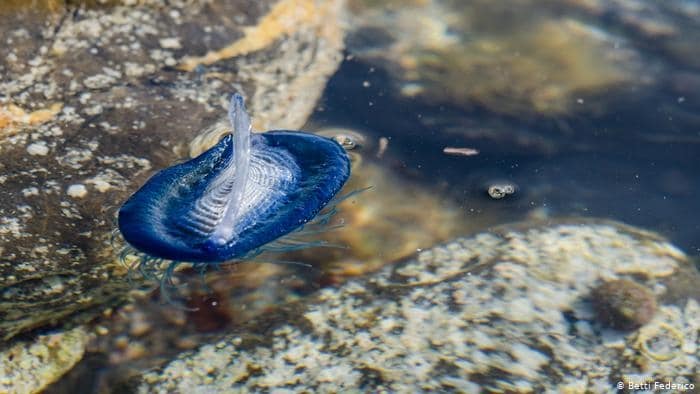 Velella velella jellyfish living on the surface of the ocean.

But now, they face another — manmade — threat from nets designed to catch trash. A project called The Ocean Cleanup, run by Dutch inventor Boyan Slat, has raised millions of dollars in donations and sponsorship to deploy long barriers with nets that will drift across the ocean in open loops to sweep up floating garbage.

Collecting With the Current

“Plastic could outweigh fish in the oceans by 2050. To us, that future is unacceptable,” The Ocean Cleanup declares on its website.

But Rebecca Helm, a marine biologist at the University of North Carolina, and one of the few scientists to study this ecosystem, fears that The Ocean Cleanup’s proposal to remove 90% of the plastic trash from the water could also virtually wipe out the neuston.

One focus of Helm’s studies is where these organisms congregate. “There are places that are very, very concentrated and areas of little concentration, and we’re trying to figure out why,” says Helm. 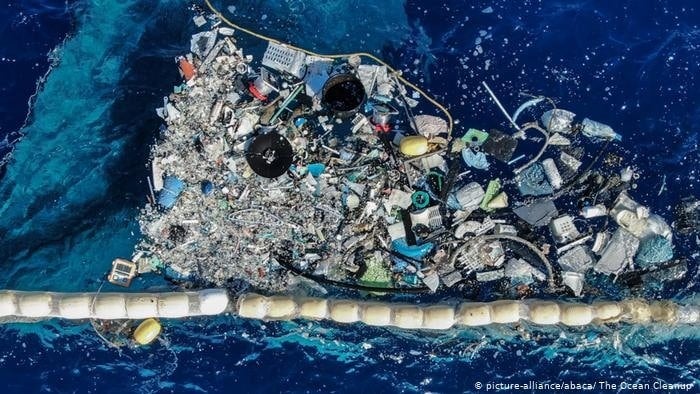 Waste collection in the Pacific Ocean heralded by The Ocean Cleanup.

The Ocean Cleanup says Helm’s concerns are based on “misguided assumptions.”

“It’s true that neustonic organisms will be trapped in the barriers,” says Gerhard Herndl, professor of Aquatic Biology at the University of Vienna and one of project’s scientific advisors. “But these organisms have dangerous lives. They’re adapted to high losses because they get washed ashore in storms and they have high reproductive rates. If they didn’t, they’d already be extinct.”

Helm says they just don’t know how quickly these creatures reproduce, and in any case recovering from passing storm is very different from surviving The Ocean Clean Up’s systems which could be in place for years.

The Ocean Cleanup invited Helm to a symposium on the topic in December, where both sides presented their points of views and didn’t seem to find much common ground. Since then, direct communication between them has stopped, says Helm. “They’re not interested in talking to me anymore.”

Both sides agree that much is still unknown about the neuston. But one thing that has been established is that most of the oceans’ fish spend part of their lifecycle in the neuston. “More than 90% of marine fish species produce floating eggs that persist on the surface until hatching,” Betti says.

The Ocean Cleanup has undertaken one of the few studies into this ecosystem, collecting data on the neuston on the relative abundance of neuston and floating plastic debris in the eastern North Pacific Ocean during a 2019 expedition to the Pacific Garbage Patch, an area where plastic pollution has accumulated on a vast scale. But it is not yet sharing what it has found. The information was being prepared for publication in an as of yet unspecified journal, probably some time next year, an Ocean Cleanup spokesperson said.

Helm believes the best way to tackle the marine plastic problem would be to position the barriers closer to land — across river mouths and bays — to catch garbage before it reaches the sea.

“Stopping the flow of plastic into the ocean is the most cost-effective — and literally effective — way to ensure that it’s not entering our environment,” she says.

As for the plastic already floating in open waters, she does not believe it is worth sacrificing parts of neuston and wants to see more research first.

The Ocean Cleanup has made barriers across rivers a part of its mission. But it is also going ahead with its original vision of pulling trash from the open water. In late 2018, the project deployed a 600-meter, u-shaped prototype net into the Great Pacific Garbage Patch.

The system ran into difficulties, failing to retain plastic as hoped, and needing to be brought shore for repairs and a design upgrade, after which Ocean Cleanup says it gathered haul of plastic that it will recycle and resell to help fund future operations.

Over the next two years, the project hopes to deploy up to 60 such barriers to collect drifting flotsam. Helm isn’t the only one concerned about these plans.

“We should think twice about every action we take in the sea,” Betti says. “In nature, nothing is as easy as we think, and often, we’ve done a lot of damage while trying to do a good thing.”