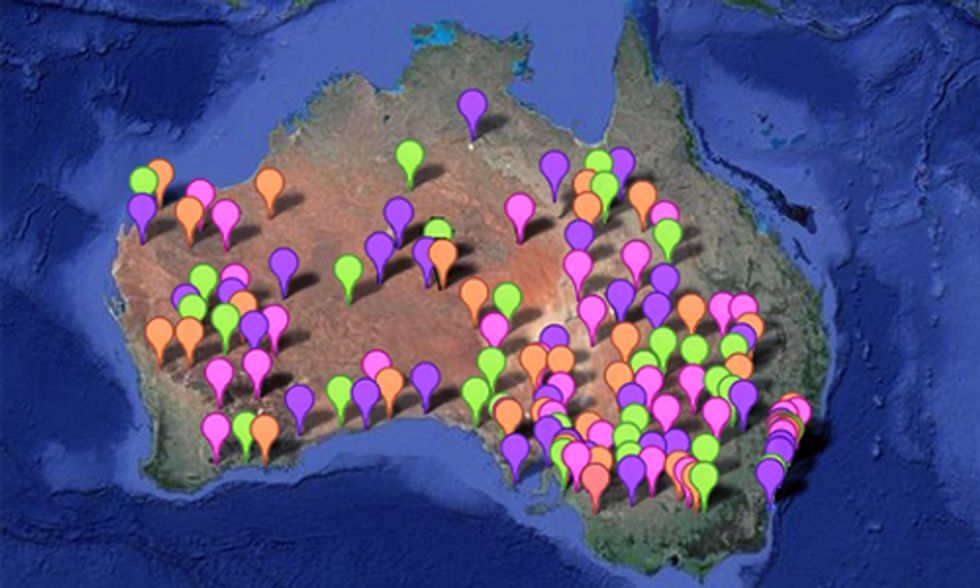 Scientists are fond of saying that it is difficult to pin the blame for any one climate event onto climate change. But they have just made an exception by reporting that many things that happened in Australia in 2013 bore the signature of man-made climate change.

Australian weather stations recording temperatures of 45°C or above in January 2013 Image: Squidman18559 via Wikimedia Commons

And in a special edition of the Bulletin of the American Meteorological Society, examining extreme events around the world during 2013, a series of papers home in on the Australian heat waves, and identify a human influence.

“We often talk about the fingerprint of human-caused climate change when we look at extreme weather patterns,” said David Karoly, professor of meteorology at the University of Melbourne’s School of Earth Sciences. “This research across four different papers goes well beyond that.

“If we were climate detectives, then Australia’s hottest year on records in 2013 wasn’t just a smudged fingerprint at the scene of the crime, it was a clear and unequivocal handprint showing the impact of human-caused global warming.”

In general, the world’s meteorologists have found nothing unequivocal to suggest that global warming due to greenhouse gas emissions from fossil fuel combustion caused, for example, the Californian drought, extreme snow in the Spanish Pyrenees or an October blizzard in South Dakota in the US.

And they reckoned that the record hot year of 2013 would have been virtually impossible without global warming. At a conservative calculation, the science showed that the heat of 2013 was made 2,000 times more likely by global warming.

Paradoxically, Australia’s prime minister, Tony Abbott, was one of the world leaders who pointedly stayed away from the recent United Nations climate change summit in New York, and in the past has taken a sceptical stance on climate science. Yet research funded by Australian taxpayers has consistently painted a different picture.

“When it comes to what helped cause our hottest year on record, human-caused climate change is no longer a prime suspect—it is the guilty party,” said Dr Sophie Lewis, a paleoecologist at the Australian National University.

And her colleague, Sarah Perkins, a climate scientist at the Australian Research Council’s Centre of Excellence for Climate System Science, warned that 2013 was only the beginning.

She said: “If we continue to put carbon into our atmosphere at the currently accelerating rate, years like 2013 will quickly be considered normal, and the impacts of future extremes will be well beyond anything modern society has experienced.”