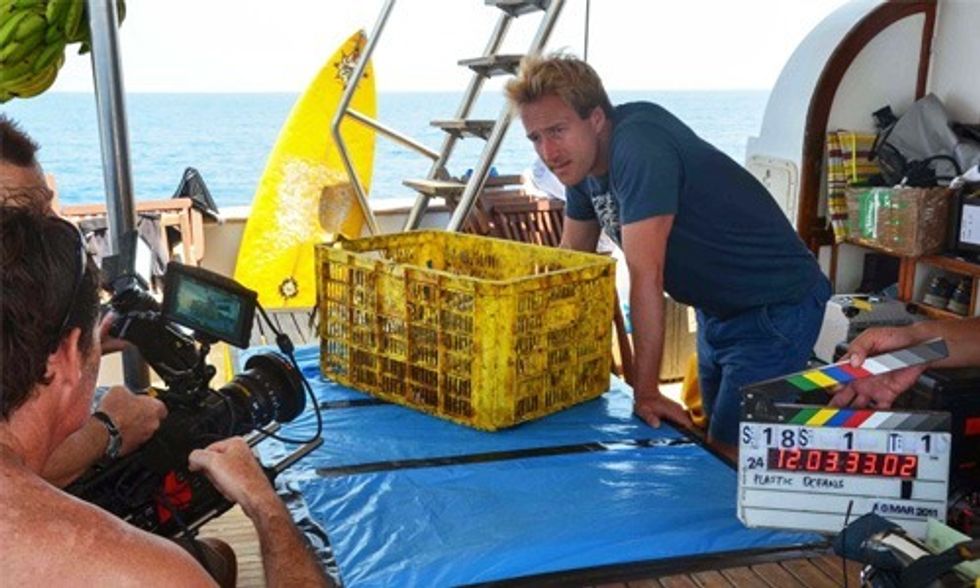 Rising seas, severe droughts, catastrophic storms, people foraging for food ... Sounds like a backdrop for a post-apocalyptic film but this is climate change and it’s the real-life blockbuster happening right now.

Whether it’s Al Gore’s An Inconvenient Truth or Greenpeace’s How to Change the World, films have the ability to highlight environmental issues and empower a movement to create change. But it’s not just documentary films, climate fiction or cli-fi is the literary genre that has risen out of our recognition of climate change and the need to do something about it.

After all, as first-time Oscar winner and climate activist Leonardo Dicaprio said last night, “Climate change is real. It is happening right now. It is the most urgent threat facing our entire species. And we need to work collectively together to stop procrastinating.”

So without further ado, here’s a few enviro-flicks you can binge watch.

When surfer, journalist and filmmaker Craig Leeson heard about the amount of plastic in our oceans he was “shocked and horrified.”

“I’d like to think I am environmentally aware and I love the ocean and here I was using this stuff without a care in the world. I’d been brainwashed into believing that plastic was disposable, as everyone has,” he told the South China Morning Post.

The result is a personal journey of why and how so much trash ends up in our ocean. After all if we don’t clean up our act we could end up having more plastic than fish by 2050.

Zhao Liang has made some courageous documentaries, like people living with HIV and petitioners in Beijing, but for a long time has wanted to tackle an environmental subject. The result is Behemoth, a haunting 90-minute film with beautiful gothic-like images, backed by a Mongolian soundtrack and with no dialogue.

Whilst China might be fast-tracking its way to a renewable energy future and making steps to shut down coal mines, the reality is that many parts of the country and major cities are suffering from the coal industry’s side effects—air pollution, health risks, worker’s rights and compensation—and will continue to do so for many years to come.

"We should be planting now but there is no water ... no rain means no income."

Severe droughts in the Philippines brought on by El Niño have destroyed many Filipino farmers’ crops. The frequency and intensity of these events are predicted to increase with climate change, resulting in droughts and stronger typhoons.

This short film documents how organic farming can increase farmers' resilience in dealing with a changing and less predictable climate, as more and more Filipino farmers are finding that adopting ecological farming practices enables them to adapt to the new climate reality.

George Clooney and Britt Robertson star in this American “cli-fi” mystery adventure film about a disillusioned and disgruntled inventor, Frank Walker (Cloney) and a science prodigy, Casey Newton (Robertson). When Casey stumbles across a magical pin, it instantly shows her a world filled with climate doom. She enlists in Frank who also knows of the powers of the pin. Can they save the world from its predicted climate change future?

Hong Kong filmmaker is known for making non-sensical comedy-action type films like Shaolin Soccer and Kung Fu Hustle. His latest The Mermaid, is no different but one key point stands out—amongst all the action and over-the-top CGI effects, deep down it’s a film about how humans are destroying the environment … and mermaids, of course.

Since its release, it’s literally made a huge splash, having become China’s highest grossing film. Using real footage of water pollution and dying sea creatures, it leaves the viewer pondering one question.

“Hypothetically, if the world doesn’t have a single drop of clean water or single breath of clean oxygen left, what do you want the most?”

Over a year, investigative journalist Chai Jing visited factories, interviewed government officials, spoke to environmental experts and business owners, all while investing her own money and finding out that her as yet unborn daughter had developed a tumor in the womb.

The result? One of the China’s most influential films, viewed more than 150 million times!

What is it about? Air pollution.