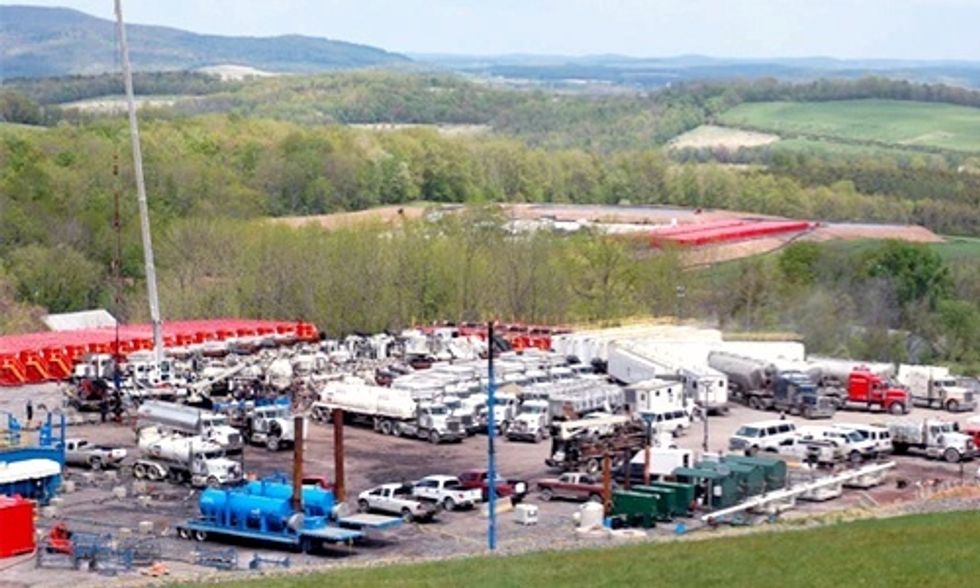 The report found that fracking for shale oil and gas has not led to "widespread, systemic impacts on drinking water resources in the United States," but said fracking could contaminate drinking water under certain conditions, such as when fluids used in the process leaked into the water table, and found isolated cases of water contamination.

The report looked at water use at five stages of the water-intensive process: use of the available water supply for fracking; the mixing of chemicals with water to create fracking fluid; the flowback of the fluid after it has been injected underground to fracture shale deposits to release oil or gas; treatment of the wastewater byproduct of fracking; and the injection wells frequently used to dispose of fracking wastewater when the process is complete.

"Hydraulic fracturing in combination with advanced directional drilling techniques has made it possible to economically extract oil and gas from unconventional resources, such as shale, tight formations and coalbeds," the report says. "The growth in domestic oil and gas exploration and production made possible by the expanded use of hydraulic fracturing, has raised concerns about its potential for impacts to human health and the environment. Specific concerns have been raised by the public about the effects of hydraulic fracturing on the quality and quantity of drinking water resources."

The report also pointed out the declining amount of water that could be available for drinking purposes due to extended drought, saying, "The future availability of drinking water sources that are considered fresh in the U.S. will be affected by changes in climate and water use. Declines in surface water resources have already led to increased withdrawals and cumulative net depletions of groundwater in some areas."

Fracking sites, such as this one in Troy, Pennsylvania, are often close to drinking water sources. Photo credit: U.S. EPA

The study, nearly 1,000 pages long, presents some of the copious research being done on the impacts of fracking and identifies the ways in which fracking operations could affect drinking water supplies. And while the EPA did warn that lack of complete information on these operations as well as changes in the industry limited a complete assessment of these impacts, it identified "potential mechanisms by which hydraulic fracturing could affect drinking water resources."

The EPA notes in its executive summary that data used in its assessment of wells came from FracFocus, a publicly accessible website managed by the Ground Water Protection Council and the Interstate Oil and Gas Compact Commission where oil and gas production well operators may disclose information voluntarily or pursuant to state requirements about the ingredients used in hydraulic fracturing fluids at individual wells.

As a result of this limited and voluntary information provided by oil and gas companies for the EPA study, Wenonah Hauter, executive director of Food & Water Watch, pointed out, "The study released today falls far short of the level of scrutiny and government oversight needed to protect and health and safety of the millions of American people affected by drilling and fracking for oil and gas. It is outrageous that the oil and gas industry refused to cooperate with the EPA on a single ‘prospective case study.’ This reveals the undue influence the industry has over the government and shows that the industry is afraid to allow careful monitoring of their operations.”

In response to these findings, Mark Ruffalo, actor and advisory board member of Americans Against Fracking, said, "Today's EPA fracking water contamination study confirms what both the oil and gas industry and the Obama Administration have long denied—that fracking poisons American's drinking water supplies. The EPA study reviewed hundreds of confirmed water contamination cases from drilling and fracking. It's time to stop poisoning the American people and shift rapidly to renewable energy."

John Armstrong of Frack Action agrees. "Like hundreds of peer-reviewed studies, this shows that New York was right to ban fracking. Despite serious shortcomings, including the fact that the oil and gas industry refused access to collect the data needed, the EPA study clearly shows that fracking has been impacting and contaminating drinking water. All water is connected. Any sign of drinking water contamination signals a public health crisis and is a call for a ban.”