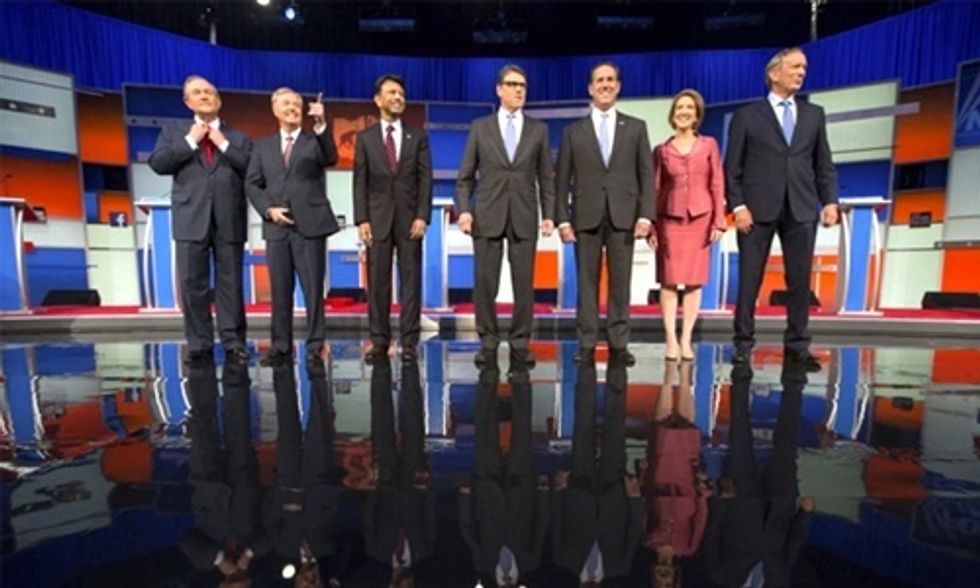 The first debate for the Republican presidential contenders took place last night in Cleveland, Ohio. Because of the 17-person field, the first debate night was split in two. The top 10 polling candidates debated at 9 p.m., while the bottom seven participated in what was dubbed the "Happy Hour Debate," at 5 p.m.

Scant attention was paid to environmental issues at the first Republican primary debate.

Scant attention was paid to environmental issues at the first Republican primary debate. Climate change was not even mentioned once during the 9 p.m. debate. The only time it came up during the earlier debate was when moderator Bill Hemmer brought it up in a negative way saying to Lindsey Graham, "You worked with Democrats and President Obama when it came to climate change—something you know is extremely unpopular with conservative Republicans. How can they trust you based on that record?"

Moderator: Lindsey Graham, with climate change, you believe in science. How can people trust you? So this is going well. #GOPDebate

“You can trust me to do the following: that when I get on the stage with Hillary Clinton, we won't be debating about the science," Graham replied. "We will be debating about the solutions. In her world, cap-and-trade would dominate. That will destroy the economy in the name of helping the environment. In my world, we would focus on energy independence and a clean environment.”

Lindsey Graham did not back away from believing in climate change. That was gutsy, especially in this crowd. #GOPDebate — Darryl Johns (@idarrylm) August 7, 2015

That sounds promising, but Graham goes on to say, “When it comes to fossil fuels, we’re going to find more here and use less,” he continued. “Over time we’re going to become energy independent. I am tired of sending $300 billion overseas to buy oil from people who hate our guts.” Graham supports more domestic coal and oil production and said later in the debate, that Clinton is “not going to build the Keystone pipeline. I will.”

"The choice between a weak economy and a strong environment is a false choice," he said, seemingly contradicting his earlier statement that a cap-and-trade program would "destroy the economy in the name of helping the environment." But Graham concludes by saying, "A healthy environment, a strong economy and an energy independent America—that would be the purpose of my presidency."

Even though Graham's remarks are a far cry from a serious call to action on climate change, at least he isn't "debating about the science," which is more than most of the other candidates can say. As evidenced by Graham's comments, the most talked about issue by far in both debates wasn't even an issue. It was a person: Hillary Clinton. Many of the candidates gave obligatory swipes at President Obama, but every candidate made sure to take jabs at Clinton whenever possible. It took almost an hour into the 9 p.m. debate for anything eco-related to even come up.

When asked whether he would cut government funding for departments such as the Internal Revenue Service and the U.S. Environmental Protection Agency (EPA), former Arkansas Gov. Mike Huckabee called the EPA's mandates unconstitutional without any explanation as to what he meant by that. Scott Walker embraced an "all-of-the-above" energy strategy and Jeb Bush made mention of the need to embrace the "energy revolution," which Slate describes as "a vaguely worded reference to the boom in natural gas and renewables." Bush also voiced his support for the Keystone XL pipeline, making sure to slam Clinton (of course) for not saying whether or not she supports it.

"Hillary Clinton can't even say she's for the Keystone XL pipeline after she's left [the State Department]," said Jeb Bush. "Give me a break. Of course we're for it." The rest of the main debate was full of standard Republican talking points: God, national security and illegal immigrants.