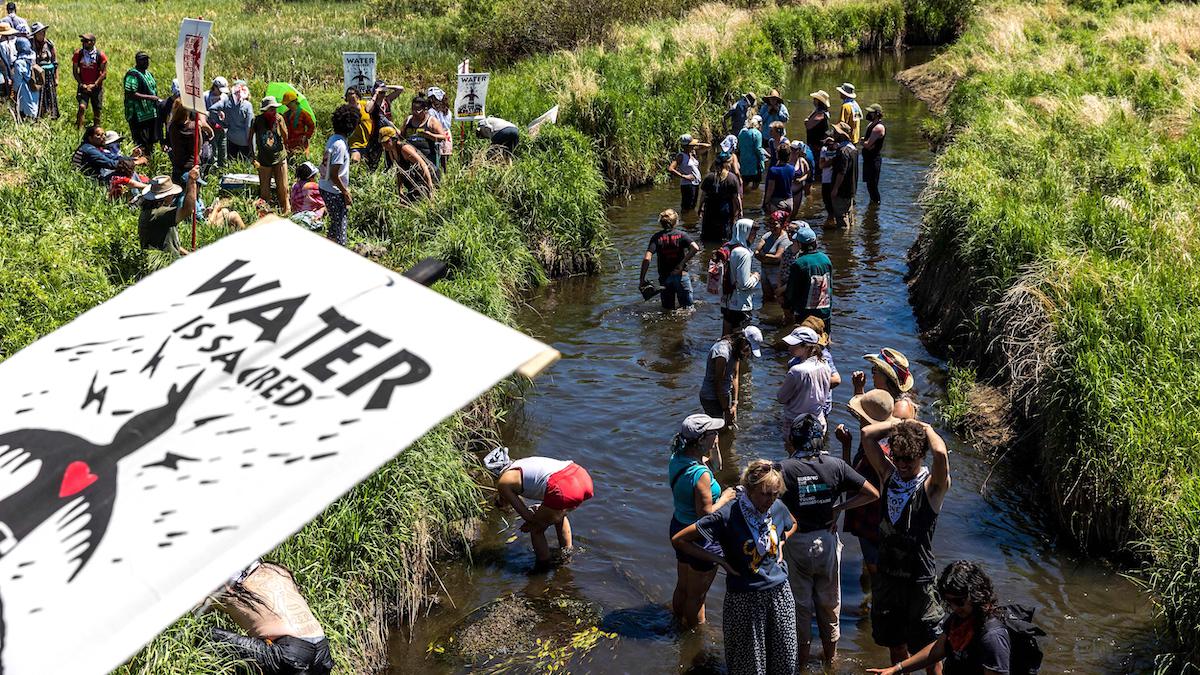 In a development progressives called a “huge legal win in the fight against Line 3,” a Minnesota court on Friday ordered police in Hubbard County to stop impeding access to the Giniw Collective’s camp, where anti-pipeline activists have been organizing opposition to Enbridge’s multibillion-dollar tar sands project.

The ruling comes less than a week after Tara Houska, an Indigenous rights attorney and founder of the Giniw Collective, and Winona LaDuke, an environmental justice advocate and co-founder of Honor the Earth, filed for a temporary restraining order against Hubbard County, Sheriff Cory Aukes, and the local land commissioner in northern Minnesota.

“We want to thank the court for informing Hubbard County about the rights of property owners, and hope that the sheriff’s continued preoccupation with the repression of water protectors can be focused on real criminals,” LaDuke said Friday in a statement.

Last month, Aukes unlawfully blockaded a 90-year-old driveway that serves as the only means of entry and exit to the Giniw Collective’s camp, which is a convergence point for Indigenous-led protests against the expansion of the Line 3 pipeline. Police officers also cited and arrested individuals who attempted to use the driveway to travel to and from the camp.

According to the Center for Protest Law and Litigation, which represented the plaintiffs alongside EarthRights International and local counsel Jason Steck:

Under the pretext that the small portion of the driveway extending from the camp’s private property onto Hubbard County property is now suddenly a “trail” and not designated for vehicular traffic local sheriffs have either physically blocked access, at times by forming a line of over 20 officers, several armed with clubs, or issued citations to water protectors who have driven vehicles on the driveway, even when delivering food, water, or other necessary supplies.
The sheriffs’ departments in the region are being paid by funds from the Enbridge pipeline corporation for their time spent acting against the pipeline’s opponents through a “Public Safety Escrow Fund.” Enbridge has paid more than $1 million to “reimburse” local sheriffs’ departments, effectively privatizing Minnesota’s public police forces in service to efforts to repress opposition to the pipeline.

In response to the court’s ruling, Houska said that “although much of the state appears to have forgotten who their duty is owed to, I’m glad to see some refusing to bend to Enbridge and instead choosing to uphold constitutional rights and basic tenets of law.”

“Just because the Hubbard County sheriff and Hubbard County attorney are opposed to Native people protecting our homelands should not mean they can engage in violent, unlawful repression without consequence,” Houska added. “Giniw Collective is glad to have rightful access to our home back.”

By granting the plaintiffs’ motion for a temporary restraining order (pdf), the court prohibited the county’s law enforcement officials from “barricading, obstructing, or otherwise interfering with access to” the camp, and from arresting, threatening to arrest, or issuing citations to passersby, unless requested by the property owner or authorized users.

This is a HUGE legal win in the fight against Line 3!! The court put a *restraining order* on the police from blockading camps and issuing citations. Keep up the fight! https://t.co/161AD4RvMO

Line 3 opponents celebrated the court’s ruling and vowed to seek a permanent injunction to protect the constitutional rights of land defenders and water protectors.

“The Hubbard County sheriff has been served notice that his illegal campaign of militarized harassment and obstruction against our clients must end now,” said Mara Verheyden-Hilliard, director of the Center for Protest Law and Litigation, a project of the Partnership for Civil Justice Fund. “Any ongoing effort by him to blockade the camp, turn it into an open-air prison, or criminalize people for coming to and from the property will subject him to a contempt action.”

“This has been an outrageous abuse of law enforcement authority serving the interests of the Enbridge corporation against its environmental opponents,” Verheyden-Hilliard added. “We will be moving for a permanent injunction to protect land defenders and water protectors from these abuses.”

“This ruling is a decisive victory for our clients, Indigenous water protectors exercising their constitutional rights to oppose the expansion of the Line 3 pipeline,” said Simons. “The sheriff admitted that this unprecedented interference with access to private property was intended to target water protectors protesting the Line 3 pipeline, and it follows a global pattern of harassing environmental protectors. This order is an important step toward listening to these communities and respecting their property rights.”

As Common Dreams has reported, climate justice and Indigenous rights advocates are opposed to the expansion of the Line 3 pipeline because it would send 760,000 barrels of tar sands oil every day from Alberta to Wisconsin — crossing North Dakota and Minnesota, traversing more than 800 wetland habitats, violating the treaty rights of Anishinaabe peoples, and putting current and future generations at risk of polluted water and a degraded environment.

Not only does the spill-prone pipeline threaten local ecosystems and communities, it would also exacerbate the carbon pollution driving planetary heating, which is why scientists and activists have described it as a “climate time bomb.”

Water defender Winona LaDuke says the Biden administration "is throwing Indigenous people under the bus" by allowing the Canadian energy company Enbridge to continue construction of the Line 3 pipeline in Minnesota. https://t.co/V4pPFnOIUJ pic.twitter.com/9PMrwPVq67

Earlier this month, more than 200 activists, celebrities, Democratic donors, and environmentalists sent a letter demanding that President Joe Biden stop Enbridge’s pipeline project — like he did with the Keystone XL pipeline on his first day in office — and to “firmly establish the principle that we will move forward toward real climate solutions.”

That letter came after the Biden administration infuriated opponents of Line 3 last month by filing a legal brief in support of the U.S. Army Corps of Engineers’ approval of the project under former President Donald Trump.

The Biden administration’s legal brief came less than three weeks after the U.S. Department of Homeland Security repressed a mass mobilization of water protectors by using low-flying helicopters to kick up sand and debris.

Biden’s refusal so far to stop Line 3 has not deterred the pipeline’s critics from continuing to fight against it in court and on the ground with peaceful acts of civil disobedience that have, at times, halted construction.