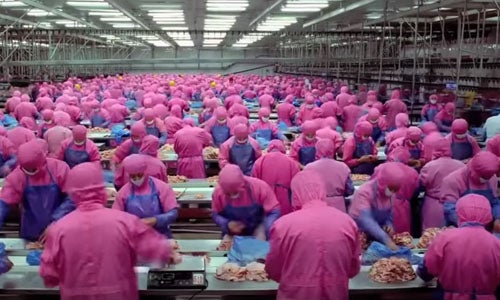 Oscar-winning actor Leonardo DiCaprio has advocated for a number of worthy causes, from fighting climate change to the importance of conservation. Now, with a single tweet, the planetary steward shines a light on the colossal environmental impact of animal agriculture.

"This is the video future generations will be wishing everyone watched today." https://t.co/h3txowAwyJ via @MercyforAnimals

In his tweet, DiCaprio included a link to a stunning video from Mercy For Animals, a Los Angeles-based nonprofit organization dedicated to preventing cruelty to farmed animals, and promoting compassionate food choices and policies.

The 4-minute clip, with the tag-line “This is the video future generations will be wishing everyone watched today,” starts by showing the awe-inspiring, grandeur of our living, breathing planet Earth as well as its incredibly vast biodiversity. It then turns dark as footage rolls of crumbling glaciers and disappearing coastlines, and links these global catastrophes to mankind’s insatiable appetite for meat.

The video points out that animal agriculture and meat consumption is the number one cause of environmental destruction, species extinction and ocean “dead zones.” The agricultural industry has consumed one-third of all fresh water and has destroyed 91 percent of the Amazon.

The video, however, ends on a good note. Its message, “She is our mother, there is only one, she is dying, she can be saved,” urges us all to help save our struggling ecosystems before it’s too late.

Big Ag’s wide variety of practices is a contributor to our increasingly hotter planet. As Clare Birkett wrote for Common Dreams, it’s not just the burping cows to blame for ever-rising carbon emissions:

Industrial agriculture is at the heart of social and ecological costs of farming and integral to this are monocultures. These vast areas of production of one type of crop entail systematic deforestation and require machinery, fertilizers and pesticides which are highly reliant on fossil fuels. As more and more crops are cultivated for agrofuels, the interrelationship between big agriculture and energy firms is increasing and fields are viewed more like oil wells than as places of food production.

These harmful effects are intensified with meat and dairy production, which requires huge amounts of grain feed and bring belching cattle into the equation, which accounts for a huge chunk of direct emissions. This problem has deepened over the last fifty years with the increasing “meatification” of diets. The situation is only likely to worsen, with food production expected to double by 2050 according to the FAO, as the global population expands and meat consumption per capita rises and more people move into the middle classes.

A 2014 research paper from UK think tank Chatham House, Livestock—Climate Change’s Forgotten Sector, said greenhouse gas emissions from livestock account for about 14.5 percent of the global total, more than direct emissions from the transportation sector and more than all the emissions produced by the U.S., the world’s biggest economy.

The study also suggested why it may be necessary for a lot more people to go vegetarian or at least dial down their consumption of meat and dairy products.

So does DiCaprio himself shy away from meat? While he’s never explicitly said so, it wouldn’t be surprising if the environmental crusader has a plant-based diet.

The Telegraph noted that the “vegan actor” went really method in order to consume raw bison’s liver for his Oscar-winning role in The Revenant:

In a revealing interview with Variety, it appears that it wasn’t just DiCaprio’s principles at stake, but also his career. The piece explains how DiCaprio’s lawyer and agents were called regarding the offal, and both parties had to give their clearance before producers served up the organ, which could have been riddled with disease.

Director Alejandro G. Inarritu told Variety that he was concerned about his leading man getting ill from eating the liver, but was pleased DiCaprio did it, as “without it, he may not have gotten to the truth.”

As for DiCaprio, the actor complained that “the bad part is the membrane around it. It’s like a balloon. When you bite into it, it bursts in your mouth.”

7 Facts about #meat that'll make you spit out your burger. #StayWoke https://t.co/dozmbWTla2 pic.twitter.com/J3E0NjmC76

The Hollywood superstar is also the executive producer of Cowspiracy: The Sustainability Secret, a searing documentary about animal agriculture and its contribution to environmental ill, as well as Big Ag turning a blind eye to the disaster in the making.