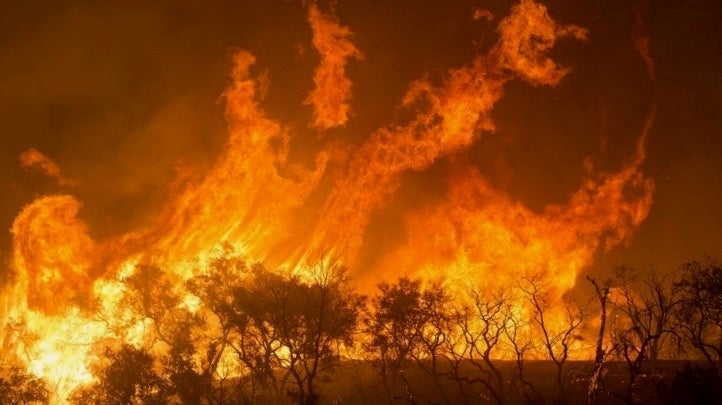 Leaked documents show that Jair Bolsonaro’s government intends to use the Brazilian president’s hate speech to isolate minorities living in the Amazon region. The PowerPoint slides, which democraciaAbierta has seen, also reveal plans to implement predatory projects that could have a devastating environmental impact.

The Bolsonaro government has as one of its priorities to strategically occupy the Amazon region to prevent the implementation of multilateral conservation projects for the rainforest, specifically the so-called “Triple A” project.

“Development projects must be implemented on the Amazon basin to integrate it into the rest of the national territory in order to fight off international pressure for the implementation of the so-called ‘Triple A’ project. To do this, it is necessary to build the Trombetas River hydroelectric plant, the Óbidos bridge over the Amazon River, and the implementation of the BR-163 highway to the border with Suriname,” one of slides read. 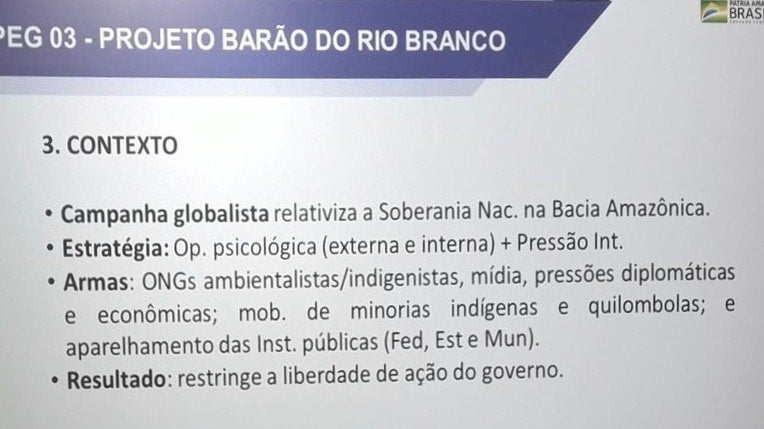 One of the slides from the presentation.

In February, ministers Gustavo Bebianno (Secretary General of the Presidency), Ricardo Salles (Environment) and Damares Alves (Women, Family and Human Rights) had planned travel to Tiriós (Pará) to speak with local leaders about the construction of a bridge over the Amazon River in the city of Óbidos, a hydroelectric plant in Oriximiná, and the expansion of the BR-163 highway to the Suriname border. But this meeting was canceled.

A second meeting among government officials, also in February, used a PowerPoint presentation that details the projects announced by the Bolsonaro government for the region. The presentation, which was leaked to democraciaAbierta, argues that a strong government presence in the Amazon region is important to prevent any conservation projects from taking roots.

The slides are clear. Before any predatory plan is implemented, the strategy begins with rhetoric. Bolsonaro’s hate speech already shows that the plan is working. The Amazon is on fire. It’s been burning for weeks and not even those who live in Brazil were fully aware. Thanks to the efforts of local communities with the help of social networks, the reality is finally going viral.

The online reaction is far from being sensationalist. This year alone, Brazil had 72,000 fire outbreaks, half of which are in the Amazon. The National Institute for Space Research reported that its satellite data showed an 84% increase on the same period in 2018.

Attacking non-governmental organizations is part of the Bolsonaro government’s strategy. According to another of the PowerPoint’s slide, the country is currently facing a globalist campaign that “relativizes the National Sovereignty in the Amazon Basin,” using a combination of international pressure and also what the government called “psychological oppression” both externally and internally.

This campaign mobilizes environmental and Indigenous rights organizations, as well as the media, to exert diplomatic and economic pressure on Brazilian institutions. The conspiracy also encourages minorities — mainly Indigenous and Quilombola (residents of settlements founded by people of African origin who escaped slavery) — to act with the support of public institutions at the federal, state and municipal levels. The result of this movement, they say in the presentation, restricts “the government’s freedom of action.”

So it is unsurprising that Bolsonaro’s response to the fires comes in the form of an attack on NGOs. On Wednesday, August 21, Bolsonaro said he believed non-governmental organizations could be behind the fires as a tactic “to draw attention against me, against the government of Brazil.”

Bolsonaro did not cite names of NGOs and, when asked if he has evidence to support the allegations, he said there were no written records of the suspicions. According to the president, NGOs may be retaliating against his government’s budget cuts. His government cut 40 percent of international transfers to NGOs, he added.

Part of the government’s strategy of circumventing this globalist campaign is to depreciate the relevance and voices of minorities that live in the region, transforming them into enemies. One of the tactics cited in the document is to redefine the paradigms of indigenism, quilombolism and environmentalism through the lenses of liberalism and conservatism, based on realist theories. Those are, according to a slide, “the new hopes for the Homeland: Brazil above everything!”

Manuella Libardi is a Brazilian journalist with a Master in International Relations. She is currently editor for openDemocracy Brasil.

This article was originally published on openDemocracy.net under a Creative Commons License.