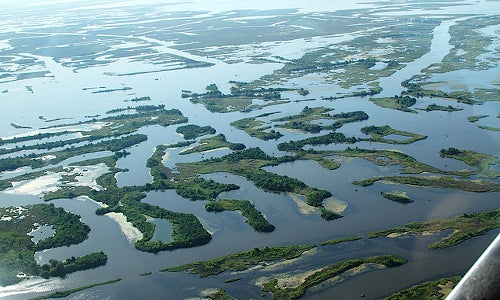 A New Orleans, LA, area regional levee board voted yesterday to continue pursing an environmental damages lawsuit against 97 (yes, 97!) oil, gas and pipeline companies. The vote—which came almost two weeks after Gov. Bobby Jindal (R-LA) signed off on a bill that strips the levee board of the power to file such lawsuits—was a boon to environmentalists and a bust for opponents, who had hoped the board would dismiss the lawsuit and end its contentious yearlong battle with the Louisiana governor.

The drama began in July 2013 with a creatively crafted lawsuit filed by the Southeast Louisiana Flood Protection Authority-East Board (SLFPA-E). The suit asserts that 10,000 miles of oil and gas canals and pipelines have been cut through Louisiana coastal lands, and draws attention to the essential role these coastal regions play as a frontline defense for New Orleans communities against hurricane-induced flooding. 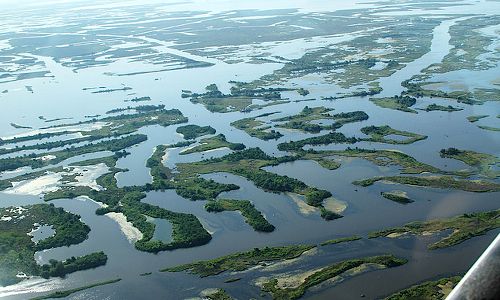 “The oil and gas industry is responsible, conservatively, for 600 miles of coastal land loss,” said Steve Murchie, campaign director with the Gulf Restoration Network, an environmental group committed to protecting and restoring the natural resources of the Gulf Region. “We have a $50 billion coastal restoration project that will probably cost closer to $100 billion to get done.”

According to the legal petition filed in the case, “Oil and gas activities continue to transform what was once a stable ecosystem of naturally occurring bayous, small canals and ditches into an extensive—and expanding—network of large and deep canals that continues to widen due to Defendants’ ongoing failure to maintain this network or restore the ecosystem to its natural state … The product of this network is an ecosystem so seriously diseased that its complete demise is inevitable if no action is taken … The consequent ecological degradation to these areas has produced weakened coastal lands and extensive land loss. This in turn has created markedly increased storm surge risk, attendant flood production costs, and, thus, damages to Plaintiff.”

In the petition, the board requests that all 97 defendants undertake significant coastal restoration activities.

Environmental advocates describe the lawsuit as a ray of hope in an often-bleak environmental landscape. “When the authority filed suit last summer, it really was a sign that the political trend was changing,” said Murchie, underscoring the influence the oil and gas industry has within Louisiana politics. “Finally, someone with some authority was willing to take action.”

Predictably, the suit was met with immediate resistance by the oil and gas industry, as well as by its allies in political office. Opponents attacked everything from the internal processes used to select a law firm, to the SLFPA-E’s authority to file the suit, to the board’s failure to consult with the governor. Industry representatives quickly turned to the legislature to wage a formal campaign against the SLFPA-E, introducing 17 different bills aimed at quashing the lawsuit. The first 16 were defeated. The seventeenth, Bill 469, passed and was signed into law by Gov. Jindal about two weeks ago, on June 6.

Bill 469 undermines the suit by removing the SLFPA-E’s authority to litigate such a damages claim. Under the bill, any activities that require permits under the Coastal Zone Management Act (CZMA)—including oil, gas and pipeline development activities—may be legally challenged only by the secretary of the Department of Natural Resources, the attorney general, parish governments and district attorneys. The bill thus strips the levee board of its authority to file lawsuits seeking remediation for such activities, despite its mission to protect coastal communities from flood risks.

In a written statement, Gov. Jindal said, “This bill will help stop frivolous lawsuits and create a more fair and predictable legal environment, and I am proud to sign it into law. It further improves Louisiana’s legal environment by reducing unnecessary claims that burden businesses so that we can bring even more jobs to your state. The bill will also send future recovered dollars from CZMA litigation to coastal projects, allowing us to ensure Louisiana coastal lands are preserved and that our communities are protected.”

John Barry, a former SLFPA-E board member who was instrumental in planning the lawsuit, was astounded by the Governor’s blatant effort to circumvent the legal system. “There is a basic, fundamental principle of American society, and that is that nobody is above the law,” said Barry. “Aside from the merits of the case, I am astounded and mortified that this state, despite its reputation for having been dominated by the [oil] industry … would pass such a bill.”

The political maneuvering has also extended into the SLFPA-E boardroom, as Gov. Jindal has refused to re-nominate board members who have supported the lawsuit. Instead, when three members reached the end of their terms last year, the Governor nominated three replacements who he could count on to undermine the suit. Barry, who was among the members replaced in the nomination process, found the maneuver particularly underhanded, given that the authority was created as an independent reform board in the aftermath of Hurricane Katrina, and as he described it, “is supposed to be insulated from politics.”

In seeking to circumvent this independent board, Gov. Jindal may have inadvertently stepped into a separate legal quagmire. Because the bill removes authority for many government entities to bring suit in actions stemming from coastal development, the bill may undermine hundreds of ongoing government claims against BP stemming from the 2010 Deepwater Horizon oil spill in the Gulf of Mexico.

“My take on it is that it was a badly drafted piece of legislation,” said Murchie. “The industry proponents had to contort themselves legally to get around a [legislative] committee that was unfavorable to them.”

In one final twist in this legal soap opera, it appears that, after all of Gov. Jindal’s political strategizing, Bill 469 may actually leave the door open for the levee board lawsuit: although the levee agency may lose standing in the case, some advocates believe the three levee districts they represent in the case could still retain legal authority to pursue the lawsuit.

Given the complicated web of legal issues that Bill 469 has woven around the lawsuit, not to mention pending BP Deepwater Horizon claims, it seems unlikely that the suit will be resolved anytime soon. One can hope, however, that one way or the other, the 97 oil and gas companies will be held to account for decades of damage done to the Louisiana coast.