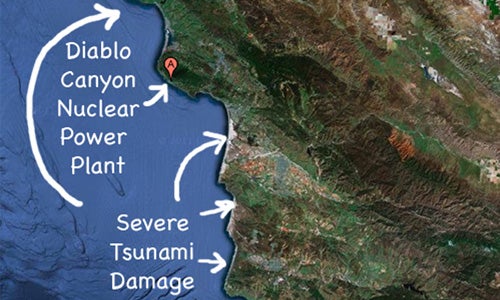 In a rare move, Washington DC’s Federal U.S. Court of Appeals will hear a landmark challenge to their continued operation. 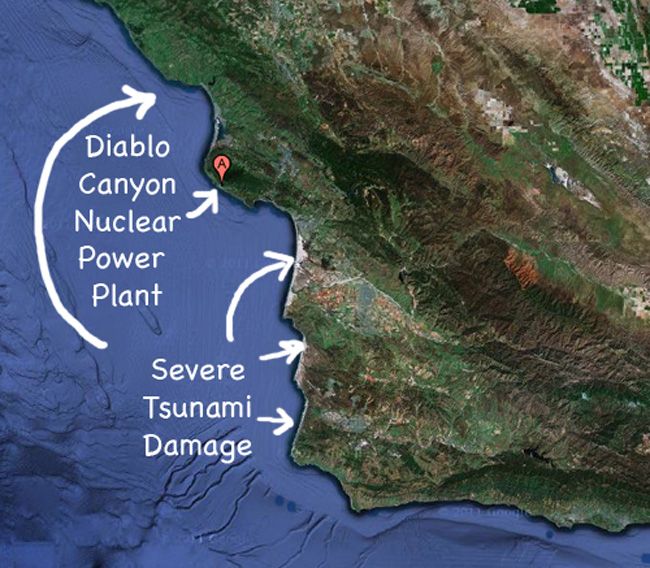 California’s two remaining reactors are surrounded by more than a dozen seismic fault lines. The Shoreline fault runs within 600-700 yards of the Diablo cores, which also sit just 45 miles from the massive San Andreas fault—half Fukushima’s distance from the epicenter of the quake that destroyed it. Photo credit: San Francisco Citizen

The suit says Diablo’s owners illegally conspired with the Nuclear Regulatory Commission (NRC) to weaken seismic standards. “This is a big victory,” says Damon Moglen of Friends of the Earth. “The public has a right to know what the Nuclear Regulatory Commission and Pacific Gas & Electric won’t admit—hundreds of thousands of people are put at immediate risk by earthquake danger at Diablo Canyon.”

California’s two remaining reactors are surrounded by more than a dozen seismic fault lines. The Shoreline fault runs within 600-700 yards of the Diablo cores, which also sit just 45 miles from the massive San Andreas fault—half Fukushima’s distance from the epicenter of the quake that destroyed it.

The two 1,100-plus megawatt Diablo nukes overlook a Pacific tsunami zone, nine miles southwest of San Luis Obispo. Since the 1980s they’ve hosted some 10,000 arrests—more than any other U.S. site.

U.S. courts generally treat the nuclear industry as a law unto itself and rarely question NRC proceedings.

But in this case, says Friend of the Earth’s S. David Freeman, “PG&E’s recent study revealed that the earthquake threat at Diablo Canyon, as measured by its original license, could be far greater than that for which the reactors were designed. So PG&E and the NRC secretly amended the license to relax the safety requirements.”

Freeman is former head of the Tennessee Valley Authority, Los Angeles Department of Water and Power and the Sacramento Municipal Utility District. Dr. Michael Peck, the NRC’s own chief seismic expert, warned that the Diablo reactors could not meet seismic safety standards. Peck was then transferred to NRC offices in Chattanooga.

The case follows a successful FOE filing showing that the NRC conspired with Southern California Edison to ignore steam generator violations at San Onofre. Amidst a massive grassroots upheaval, San Onofre was officially shut in 2013 (similar violations at Ohio’s Davis-Besse reactor have had little impact).

Earthquake issues are not the only ones poised to doom Diablo.

The two reactors dump huge quantities of hot wastewater directly into the ocean. They’re out of compliance with state and federal water quality standards. So PG&E might soon be required by state law to build cooling towers, with cost estimates ranging from $2 billion to $14 billion.

The state Water Resources Control Board may meet on the issue this spring. The San Luis Obispo Mothers for Peace and others ask the public to write the board and attend its next public hearing.

If required to build those towers, which might take years to do, PG&E would ask the California Public Utilities Commission to make the public pay for them. A vehement grassroots opposition would instantly erupt.

PG&E is much hated. Its negligence caused a 2010 gas explosion that killed eight people in San Bruno. Huge state and federal fines, criminal indictments and visceral public contempt have followed.

The CPUC is also under public fire amidst an astonishing array of scandals and law-breaking. Former chair Michael Peevey has retired in disgrace and faces a series of indictments for conspiring in secret with the utilities he was meant to regulate.

PG&E currently makes money at Diablo, says attorney John Geesman, “Only because ratepayers guarantee it against market price levels—nuclear power in states where prices are set by competitive markets are either closing (e.g., Vermont Yankee, Kewaunee, etc.) or going to the legislatures and seeking sweetheart subsidies (e.g., Illinois).” Forcing Diablo to actually compete in the marketplace would throw it into the red … and maybe out of business.

Amidst all that chaos, a requirement to pay for cooling towers might force Diablo shut. Parallel issues have erupted in New Jersey (a 2017 closure was negotiated at Oyster Creek), New York (Indian Point), Florida (Turkey Point) and elsewhere.

Draft shutdown resolutions are now circulating among cities, towns and counties in PG&E territory. A similar wave of endorsements helped force the two reactors at San Onofre to close.

A ratepayer revolt is also being organized by Code Pink’s Cynthia Papermaster. With PG&E customers withholding all or part of their bill, the potential economic impacts could be incalculable.

Diablo’s current license is set to expire by 2024. PG&E has begun the re-licensing process, but has missed key deadlines, prompting speculation they may give up.

According to intervenor sources, the California Coastal Commission (CCC) has equal standing with the NRC on the license renewal. PG&E is late with answers to six pages of the CCC’s questions. Public comment period at the commission’s open meetings begins at 9 a.m.

The California Energy Commission has a bi-annual scoping review upcoming in Sacramento. The CEC addresses California’s energy future, aiming for a reliable supply. It lacks “direct regulatory authority over whether the plant continues to operate,” says Geesman. But its recommendations are “taken very seriously” and “have resulted in legislation,” according to another source close to the process. The CEC is “very public-friendly and very important” with five commissioners “who listen.”

The Diablo Canyon Independent Peer Review Committee and the Independent Safety Committee may also play a role, and are open to public testimony.

A constant flow of Diablo-related legislation is expected in the coming months.

A possible state-wide initiative could require cooling towers and make the utility pay for them, or take up waste issues, or the seismic issue, or force a strong feed-in tariff to support the conversion to renewables.

Just under 400,000 signatures would be needed to get on the 2016 ballot. Doing that and then actually winning the vote would be a daunting task.

But to head off a 1976 ballot measure, the legislature passed an effective ban on new nuke construction. The ballot measure then failed, but the ban remains in place.

California also has a powerful anti-fracking movement that parallels its No Nukes campaign. A joint May conference in San Francisco may launch a unified green push.

With combined grassroots forces pushing on water, seismic, regulatory, economic and other issues … through the legislature, NRC, courts, Water Board, Coastal Commission, CPUC and other agencies … with creative lobbying and activism, a resolution campaign, rate revolt, initiative process and more … California is poised to make itself nuke free.

Will that happen before the next catastrophe?

The answer will come from the people of California … now maybe with a boost from the courts.