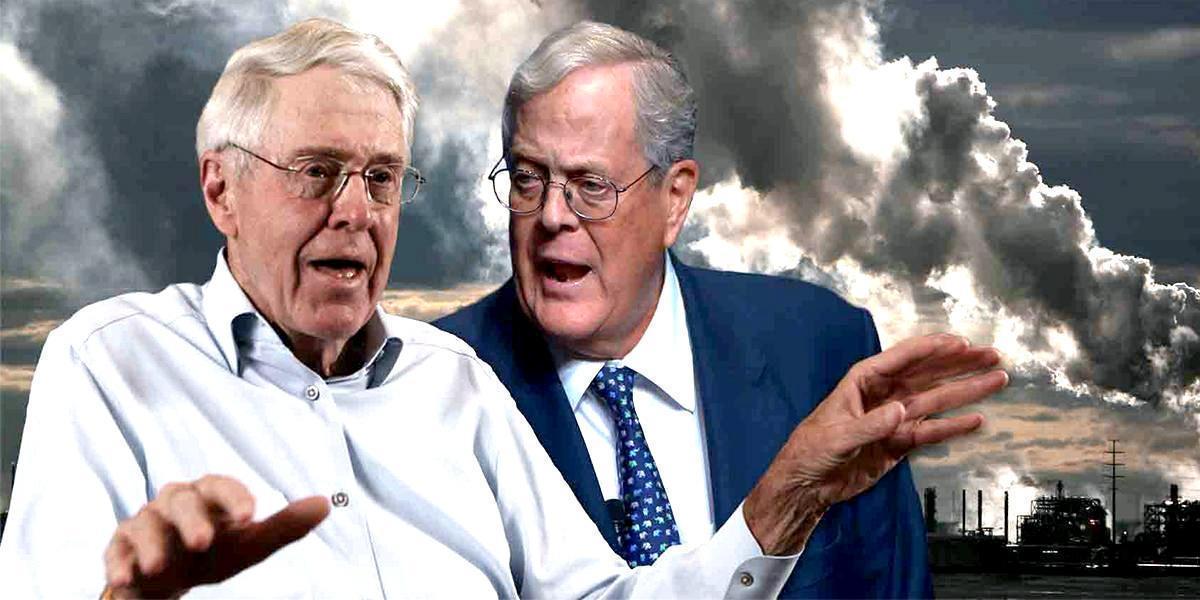 When The Washington Post reported earlier this month that President Trump appointed Daniel Simmons to run the Office of Energy Efficiency and Renewable Energy at the U.S. Department of Energy (DOE), the paper called him a “conservative scholar.”

A veteran of Charles and David Koch’s climate science denier network, Simmons has spent much of his career disparaging clean energy. His most recent job was at the Institute for Energy Research (IER), where he served as the think tank’s vice president for policy. Prior to joining IER, he was the Natural Resources Task Force director for the American Legislative Exchange Council, a corporation-funded lobby group that, like IER, has been trying to repeal state standards that require electric utilities to use more renewable energy. And before that, he was a research fellow at the libertarian Mercatus Center at George Mason University.

All three organizations have received substantial funding from the Koch brothers, owners of the coal, oil and gas conglomerate Koch Industries, who have spent more than $100 million over the last two decades on dozens of think tanks and advocacy groups to spread climate disinformation.

IER and its advocacy arm, the American Energy Alliance (AEA), are particularly indebted to the Kochs for both funding and staffing. Between 2010 and 2014, they received more than $5 million from Koch-controlled funds. And, like Simmons, top IER-AEA officials are well-entrenched members of the Koch network. IER founder and CEO Robert L. Bradley, Jr., for example, is an adjunct scholar at the Koch-founded and funded Cato Institute and the Koch-funded Competitive Enterprise Institute. He also has been a featured speaker at the Koch-funded Heartland Institute’s annual climate science-bashing conference. IER-AEA President Thomas Pyle, meanwhile, is a former lobbyist for Koch Industries and the National Petrochemical and Refiners Association. Pyle oversaw the Trump Energy Department transition team, which included Simmons and Travis Fisher, an IER economist who also is now on the DOE staff.

Given Simmons’ resume, it’s no surprise that he belittles efforts to address global warming, disingenuously asserting that the “economic damages” of curbing carbon emissions “would be greater than the damage caused by a warming world.” Never mind that if we continue to burn carbon at the same rate, U.S. property losses by 2050 from sea level rise alone would be astronomical, ranging from $66 billion to $106 billion.

Predictably, Simmons also is a staunch opponent of federal support for wind and solar power. He argues that the “government should get out of the business of betting taxpayer dollars on energy projects,” conveniently ignoring the fact that fossil fuels themselves are heavily subsidized. According to a new analysis by Management Information Services for the Nuclear Energy Institute, fossil fuels have received $666 billion (in 2015 dollars) in federal incentives since 1950, four times what renewable energy sources, including wind, solar, biofuels and biomass, have received. More than 80 percent of that fossil fuel support went to the oil and gas industry, which, according to a 2011 study by DBL Investors, has been receiving an average of $4.86 billion (in 2010 dollars) in federal subsidies every year since 1918.

Simmons will serve as acting assistant secretary for the Office of Energy Efficiency and Renewable Energy until the Senate confirms someone for the post. He will then settle in as the office’s principal deputy assistant secretary. While it’s too early to find his fingerprints on anything, his former IER colleague, Travis Fisher, has already raised some concerns. Energy Sec. Rick Perry, who also has received generous contributions from the Kochs over the years, tapped Fisher to conduct a study to assess if federal support for renewable energy threatens baseload power generators—nuclear and coal plants—and undermines electricity grid reliability.

Seven members of the Senate Energy and Natural Resources Committee have questioned the rationale for the study. In a letter to Perry, they complained that the “study, as you have framed it, appears to be intended to blame wind and solar power for the financial difficulties facing coal and nuclear electric generators” and criticized the fact that Fisher, who is clearly biased against renewables, was tasked with leading the study. Historically low natural gas prices are largely responsible for recent nuclear and coal plant closures, the senators pointed out, and several recent studies have found that wind and solar power facilities strengthen grid reliability.

The irony here, of course, is Texas—where Perry served as governor from 2000 until 2015—is the nation’s leading state for wind energy. Lone Star wind turbines generate enough electricity to power seven million average U.S. households and provide more than 24,000 jobs. On top of that, 10,000 Texans work in the solar industry and another 70,000 work in the energy efficiency field. By comparison, the coal industry employs only 50,000 workers nationwide.

Regardless, Perry likely plans to use Fisher’s grid reliability study as a pretext for rolling back incentives for wind and solar and boosting coal, one of President Trump’s campaign promises. Likewise, the study could give the Trump administration ammunition to attack state standards requiring utilities to increase their use of renewables.

States are where the action is—and likely will continue to be—given the Trump administration’s aversion to renewable energy and years of gridlock on Capitol Hill.

“There’s a lot of clean energy momentum across the country, including in states where you might not expect it,” said John Rogers, a senior energy analyst at the Union of Concerned Scientists (UCS) and lead author of a recent report rating state-by-state progress.

“The federal government has been playing an important role in encouraging renewable energy, efficiency and vehicle electrification—at least until recently—but we found that the states that have shown leadership are already reaping economic and environmental benefits, including new jobs, cleaner air and lower public health risks.”

Indeed, the growth of clean energy across the country has been nothing short of stupendous. Wind power generation, for example, increased more than tenfold over the past decade, according to the UCS report, while its cost dropped by two-thirds over the last six years. Wind farms in 41 states now provide enough electricity to power more than 20 million average U.S. households. Solar power capacity, meanwhile, has jumped more than 900 percent since 2011, while the cost of residential solar electric power fell by more than 50 percent since 2009 and large-scale solar costs declined even more.

The public is, by and large, on board. A new Pew Research Center poll found that 83 percent of Americans say expanding the use of renewable energy is a “top” or “important” national priority. Further, 54 percent of the survey respondents agree that “government regulations are necessary to encourage businesses and consumers to rely more on renewable energy sources.”

That’s the good news. The bad news is Koch surrogates have been targeting these state standards for years, and now two former IER staff members—not to mention their new boss—are in a position to do something about them. Certainly it would be the height of hypocrisy for an administration that extols states’ rights to try to scuttle state renewable energy standards, but for the Trump administration, hypocrisy is the norm. With so much clean energy momentum in blue and red states alike, the open question is just how much damage Trump’s DOE appointees will be able to do.